Life feels very different now than it did just a few weeks ago, but as many countries enter their fourth week isolating at home, we are adjusting to our new normal. Duolingo employees are now all working remotely, from our homes across the U.S. and around the world, with the exception of our Beijing office — in China, things are slowly, hesitantly, returning to normal.

Our learners, too, are adhering to shelter-in-place orders and developing new strategies to fill the days. For many around the world, Duolingo has become a part of their new at-home routine: from learning a language to feel connected to people a world away, to using Duolingo while schools and educators scramble to transition to online teaching, to building healthy new habits that create a sense of normalcy in our new routines. One of our key initiatives was creating a guide for parents and educators (athome.duolingo.com) with ideas for language-learning games and lessons that you can use at home.

In this post, we'll be sharing some of the ways in which Duolingo learners and learning behaviors have changed due to coronavirus. Learning a new language isn't just a fun, productive habit to pass the time; for our learners, language is a bridge between people enduring the same uncertainty, all around the world.

Changes in learning with Duolingo during the global pandemic

Next we'll look more closely at these numbers and what they can tell us about how users' motivations and learning preferences have changed due to the pandemic.

Learning on Duolingo is at an all-time high

Global traffic on Duolingo soared in March, as COVID-19 spread across the globe and as more countries began implementing stay-at-home orders and closing businesses and schools. Over the month of March, new users on Duolingo increased by 101%. The increase in new users was especially sharp from March 9 to March 16, the week in which the World Health Organization labeled the virus a global pandemic: growth in new users was 39% from one week to the next.

Figure 1. Increase in new users learning on Duolingo during March 2020.

COVID-19 first surfaced in China in December 2019, and government responses to the disease have rippled across the globe since then. Our data indicate that learners respond in significant ways to the speed and clarity of government-ordered isolation measures.

Among new Duolingo users in English-speaking countries, we see big differences between the U.S. and the U.K. The U.S. began implementing stay-at-home guidelines earlier than the U.K., and so there was a spike of new Duolingo learners the week of March 16, with 66% growth compared to new users at the end of February. Soon thereafter, the U.K. government changed their approach to the pandemic, and so the U.K. spike in new users came the following week, on March 23, with 296% more new users than at the end of February. Because each U.S. state has issued its own guidelines, growth in new users in the U.S. isn't as sharp and uniform as we see in the U.K., which implemented more sudden, uniform guidelines. 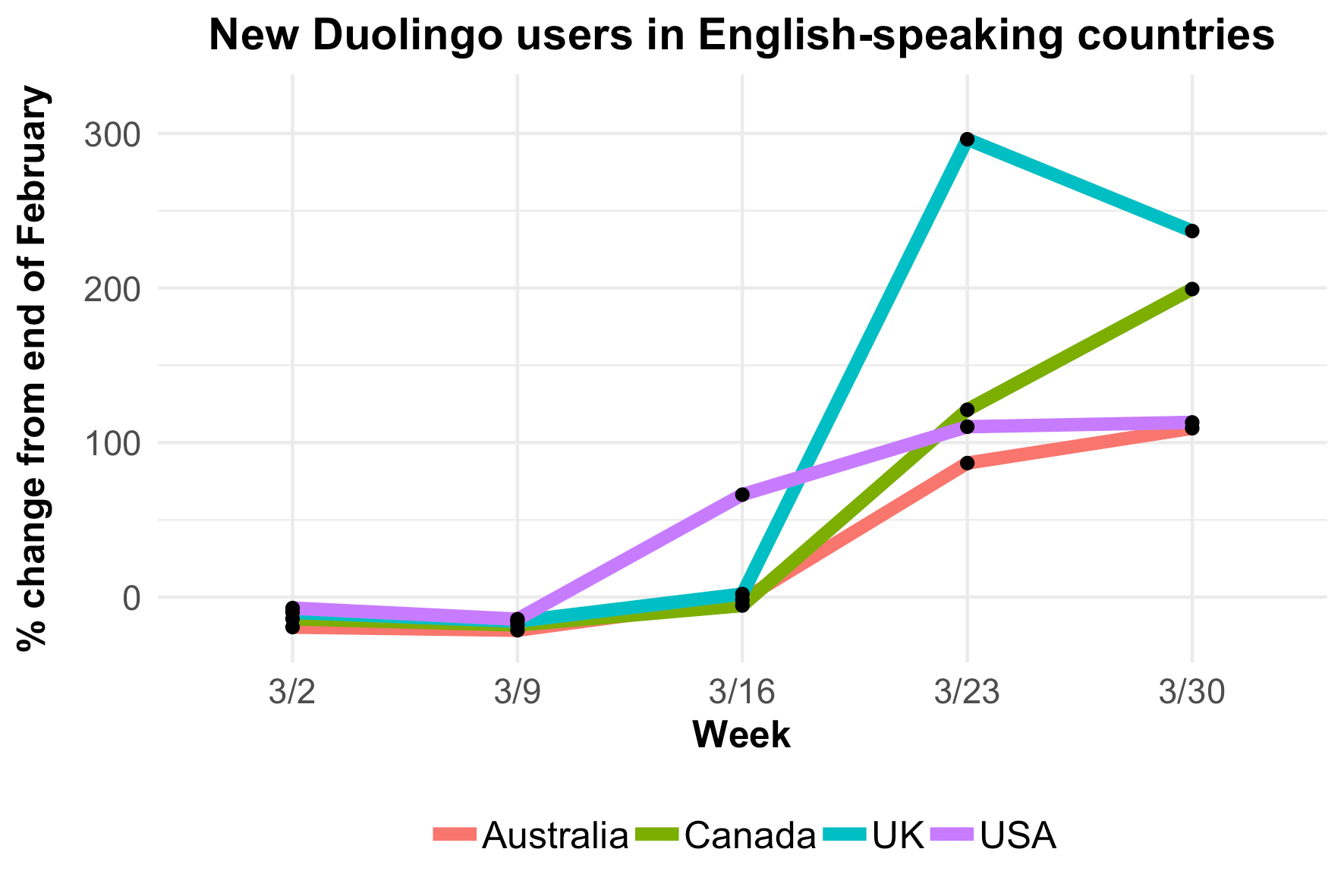 Figure 2. Increase in new Duolingo users in English-speaking countries, compared to the end of February (2/24).

New users in Europe are also responding to how the crisis has evolved in their own countries. Growth began spiking earlier in Italy than in other parts of Europe. There, COVID-19 was initially localized in northern Italy, but as the whole country began responding to the disease, learners across Italy who are staying at home have begun using Duolingo during isolation.

France and Spain also implemented stay-at-home guidelines in mid-March, after the WHO labeled the crisis a pandemic. The number of new Duolingo users in these countries grew sharply on March 16; as a result, new users in France increased 107% and new users in Spain increased by 109% compared to the end of February. 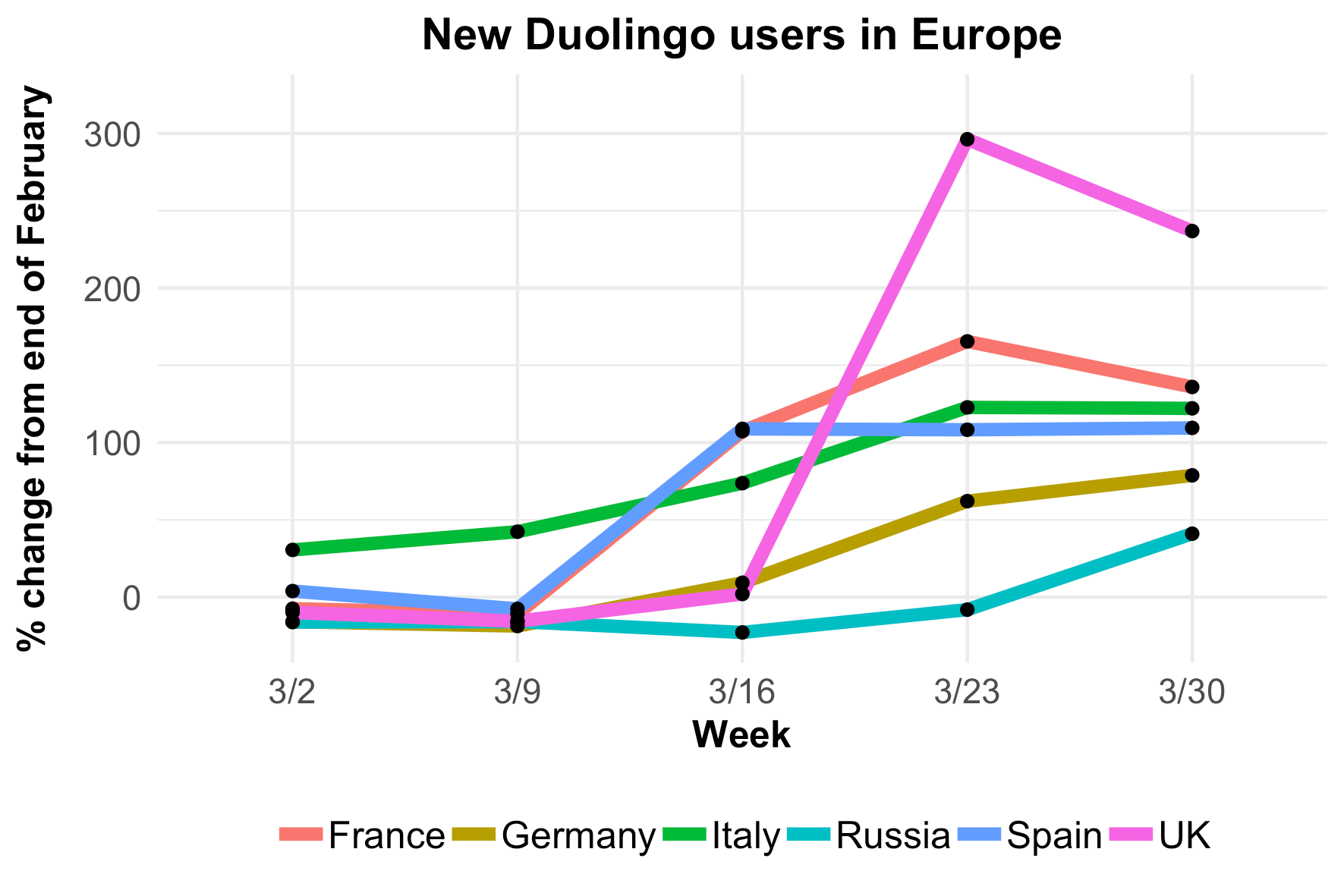 Figure 3. Increase in new Duolingo users in Europe, compared to the end of February (2/24).

There has also been significant growth in new users in Latin America, especially around March 23. At this point, new users had spiked 82% in Mexico, 91% in Chile, 92% in Peru, and 92% in Brazil compared to the end of February. In Argentina, a whopping 292% more new users joined compared to the previous month. 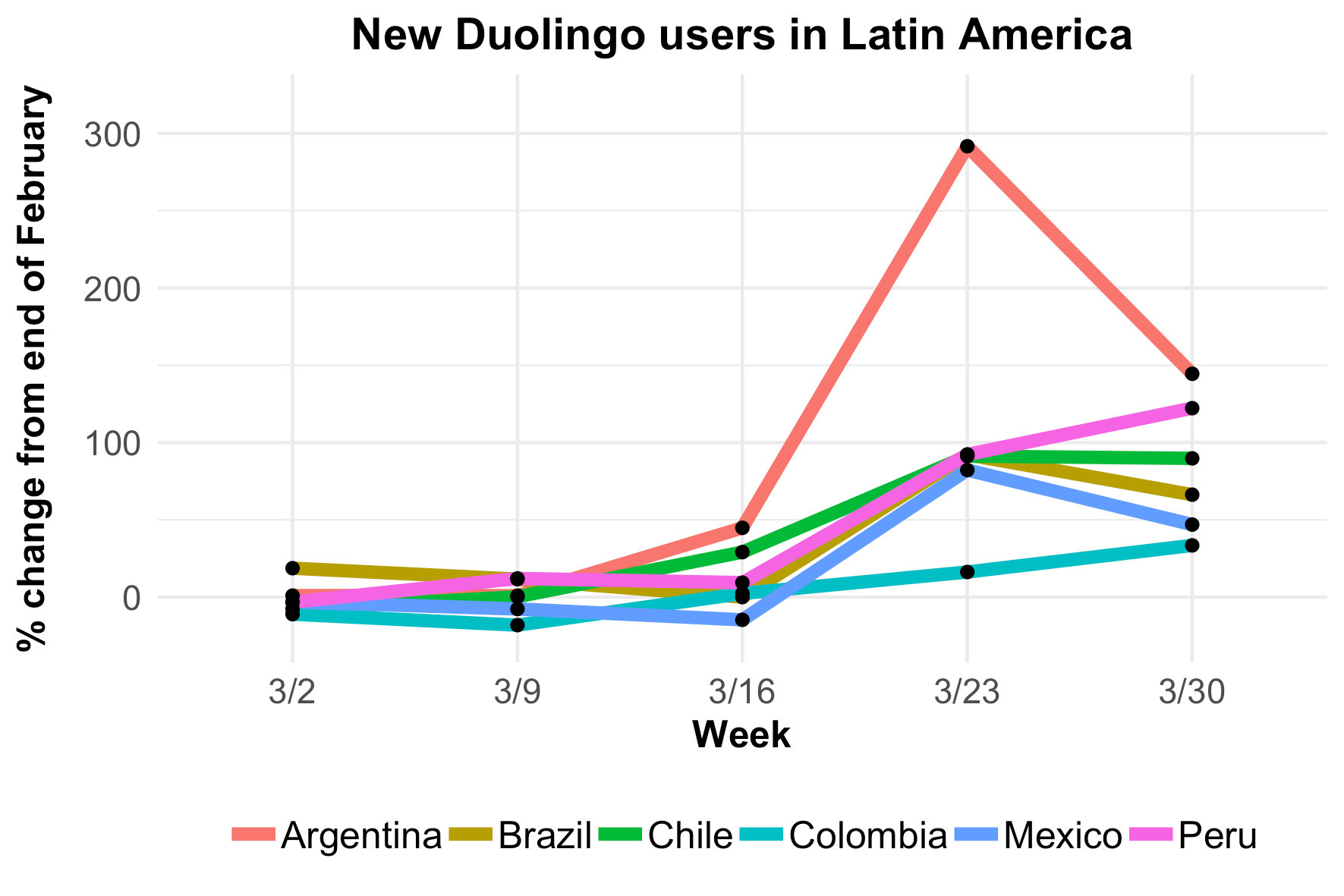 Figure 4. Increase in new Duolingo users in Latin America, compared to the end of February (2/24).

In India, the pandemic and government response are more recent: the country issued a lockdown order at the end of March, but with the health crisis looming, Indians began responding on their own even earlier. By March 23, new Duolingo users in India skyrocketed over 108% compared to the end of February, and interest in learning with Duolingo continued to surge past 320% during the final week of March! 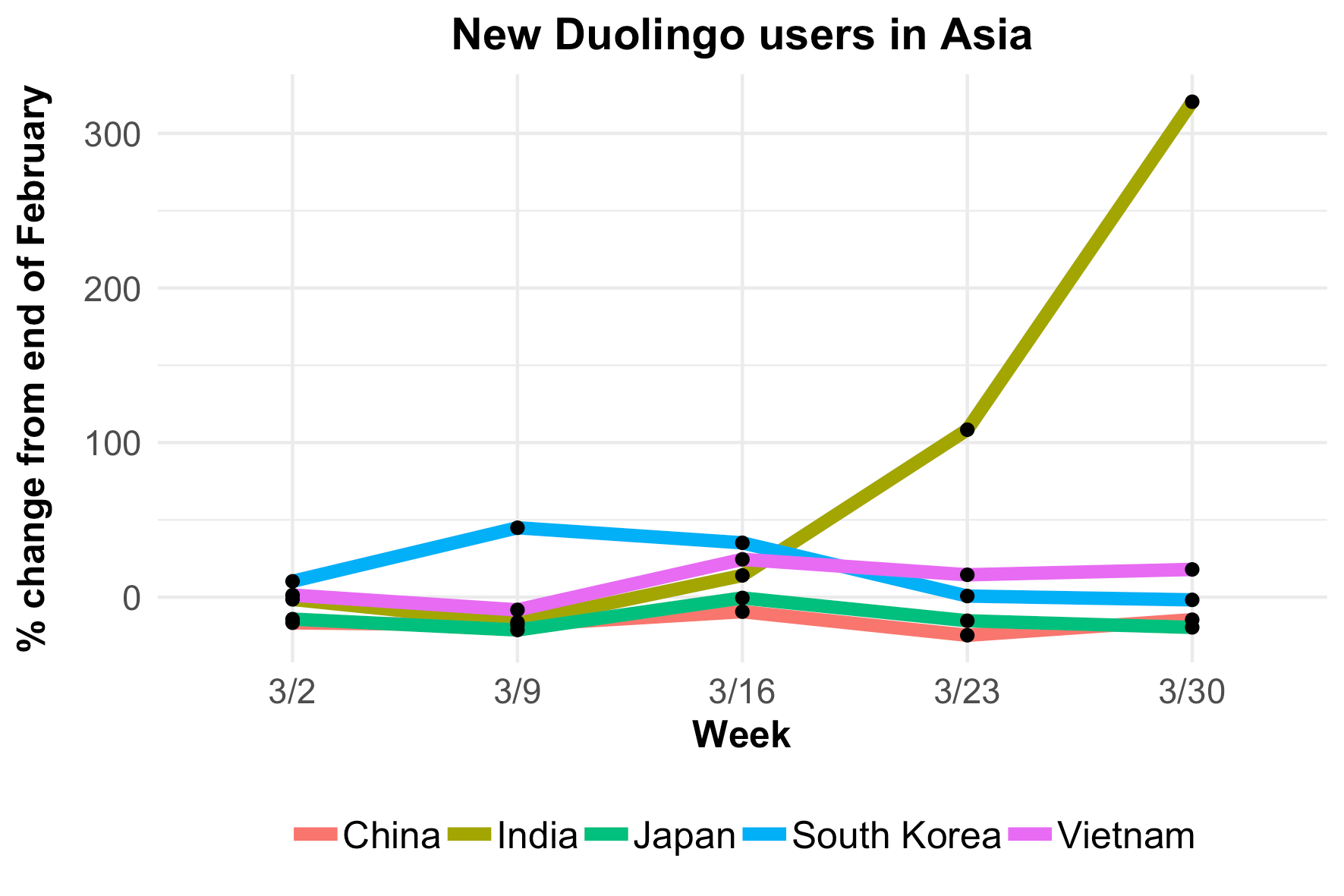 Figure 5. Increase in new Duolingo users in Asia, compared to the end of February (2/24).

Duolingo steps in to support online classrooms at home

Classroom language learners have long turned to Duolingo as a tool to complement school lessons and give them a fun, varied way to learn a language on their own time, at their own pace.

Worldwide, we've seen an increase in the proportion of users studying with us for school. In March 2020, over 30% of new learners told us they were using Duolingo for school (7% higher than normal). Brain training rose to the #2 position, with over 15% of new users using Duolingo to keep themselves sharp and engaged. Travel dropped to #3, with less than 13% of learners.

Studying for school has been an especially important factor in countries that have implemented stay-at-home policies. School use has been most notably on the rise in Mexico: Mexico had the highest proportion of school learners in the world in 2019, and that trend continued during the March surge as school learners made up more than 50% of new users in Mexico. 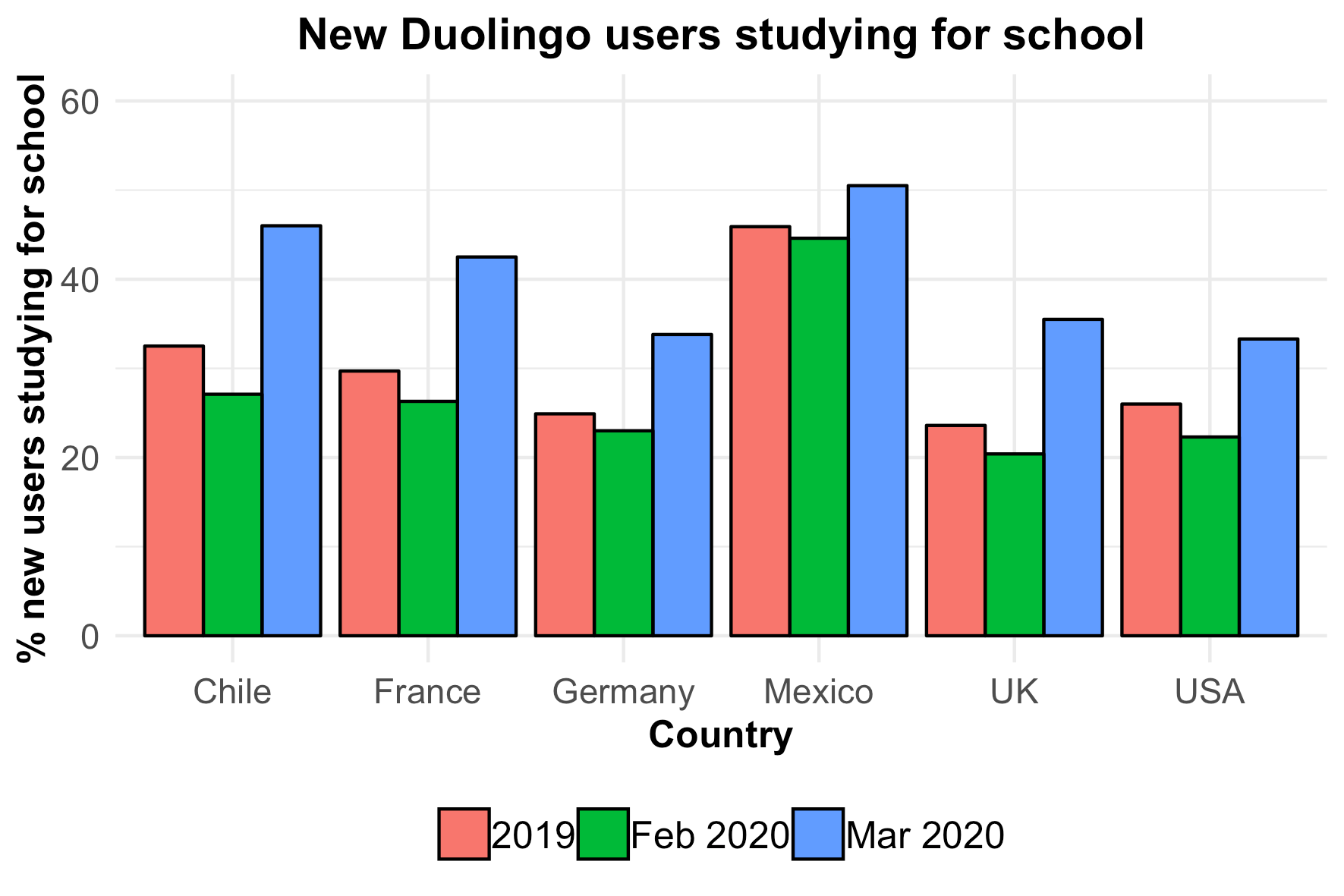 Learners choose languages they can apply

Since new learners are using Duolingo to supplement their schoolwork, users are focused on studying English, Spanish, and French. Learners in English-speaking countries are largely focused on Spanish and French, while those in non-English-speaking countries are studying English even more than usual. Most countries have also seen a decline in studying the nation's own language: in the U.S., 19% of new users in February chose to study English on Duolingo, but only 11% chose English during the peak of new users in March.

Several countries have even seen an increase in learners focusing on the languages associated with socioeconomic opportunity. In the U.S., Spanish learners have grown more than 5% between February 2020 and isolation measures in mid-March. The U.K. has seen a similar pattern: English learning is down nearly 6%, while Spanish learning is up 6% among new users and French is up nearly 10%.

Overall, learners are spending 7% more time on Duolingo now than was typical just a month ago, but new and existing users behave differently: learners who have joined Duolingo during the global pandemic spend 13% more time on Duolingo than was typical for new users in the past, and they study as much during the week as they do on weekends. Many learners used to take advantage of daily commutes to do a few lessons, but now we see an increase in midday language study, especially just before and after lunchtime.

France and Italy have seen some of the biggest changes in learners' behavior. New learners in these countries spend at least 23% more time studying on Duolingo than they did in February, and learners in both countries now study consistently across weekdays and weekends. They also do 1.5 to 2 times as many lessons between 10am and 5pm as was typical pre-COVID-19. An exception to this general pattern is the U.K., where new learners continue to maintain different weekday and weekend study habits, but they are completing as many as 2.5 times more midday lessons as was the norm.

The trends we've noted in our data indicate that at-home language learning is at an all-time high as a way to connect with the speakers and cultures we love, and to keep up learning when so much feels out of our control. As the situation changes, we expect learner behavior to change as well, and we'll continue to report on how language learning fits into our new lifestyles.