When he was 18 years old, rising soccer star Francisco Sanclemente learned he’d never walk again. But that didn’t stop him from becoming a professional athlete.

For 30 years, Ana Larriel struggled with her weight and her body image. Until she realized her body wasn’t the problem, but the social norms she’d grown up with.

Tatiana Sfiligoy knew she was adopted as a child. But it would be another decade before she unraveled the mystery of who her birth parents really were – and the role her country played in their disappearance.

What do Francisco, Ana, and Tatiana have in common? They’re all featured storytellers in the latest season of the Duolingo Spanish Podcast, which launched on March 26th. And they all share a quality the whole world needs right now: resilience.

The Duolingo Spanish Podcast is now in its seventh season, offering intermediate Spanish learners an opportunity to practice their listening comprehension while hearing fascinating, true stories told by the native speakers who lived them. Since day one, our team of producers and language experts at Duolingo and Adonde Media has sought stories of people who overcame great personal obstacles and achieved unlikely goals. But not until recently did it become clear how valuable these stories are in times of great uncertainty.

As the world adjusts to a new reality, stories like Francisco’s, Ana’s, and Tatiana’s remind us that deep wells of resilience reside inside all of us – and we’ll be drawing from them in different ways in the weeks and months to come. For the team that produces the Duolingo Spanish Podcast and the Duolingo French Podcast, this means not only adjusting how we work together on a weekly basis, but also getting creative about how to record clear audio at a time when most recording studios are closed to the public. 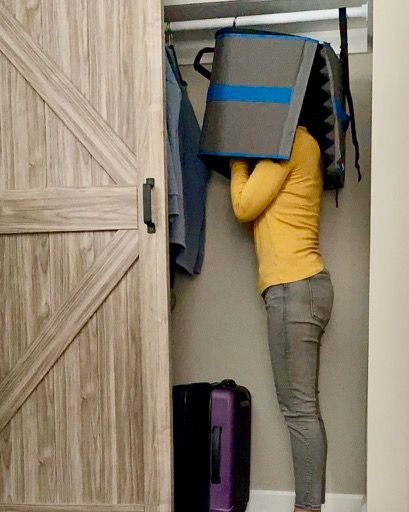 We’ve encountered similar challenges before. As a team, we work out of eight different countries and have to coordinate productions across just as many time zones. In our effort to highlight the breadth of people and experiences across the French- and Spanish-speaking worlds, our producers often find themselves in unusual and unpredictable circumstances. Sometimes, this means taking a military plane to a van to a cargo ship to a bus, just to record a 20-minute episode with an athlete who lives in a remote region of Paraguay. Other times, it means rewriting a script at the last minute, so a protagonist who defies government orders to help others won’t get in trouble with authorities.

For over 60 episodes now, we’ve produced audio at the highest industry standards. But as the world adapts to a new (and hopefully temporary) normal, we’re experimenting with different ways of recording our podcast to prioritize everyone’s safety, including enlisting our protagonists as makeshift audio engineers with whatever home recording devices, or smartphones, they’ve got.

For now, our commitment remains the same: we’ll continue to produce compelling, true audio stories for intermediate language learners. And we hope that our storytellers continue to inspire resilience in those who need it most.

Have a question or comment about Duolingo Podcasts? Please email podcast@duolingo.com. We’d love to hear from you!