By examining data drawn from 13 million downloads in the U.K., we can for the first time, and at scale, analyse what people are learning and why, to show how language learning is changing in the U.K.

In short, many more Brits are learning languages, and learning a wider range of languages. A shift in technology, culture, and accessibility has coalesced to give U.K. learners free and easy access to language learning.

British learners were already using Duolingo not because they had to, but because they wanted to. They were motivated by brain training, culture, and family – not just school, work and travel - before Covid, but changes have accelerated since the virus broke out. The latter will always be important motivations, but what’s different now is Brits see value in learning for fun, not function. They are using their phones to learn Scottish Gaelic*, Latin, and Finnish because doing so has a positive impact on their well-being.

Welsh is the fastest growing language in the U.K.

Welsh is now the fastest growing language in the U.K. with the number of new learners up 44% on 2019. Welsh is now so popular it is the ninth most popular language to learn in the country.

Welsh learners are also some of the most serious in the world, ranking third for most dedicated with the longest learning streaks (just behind Esperanto and Norwegian learners) and third for hardest working in the world, measured by the average number of completed lessons. To date over 1.5 million people have started learning Welsh on Duolingo.

The shift is down to people wanting to learn Welsh to connect with the country and see Welsh thrive as a language. This is partly driven by education, with 23% choosing school as their primary motivation – but it is also much broader. Many people now want to learn because they have an interest in Welsh culture and heritage and want to brain train, like the Russian teenager who saw Llanfairpwllgwyngyllgogerychwyrndrobwllllantysiliogogogoch and decided to learn Welsh because she fell in love with it. 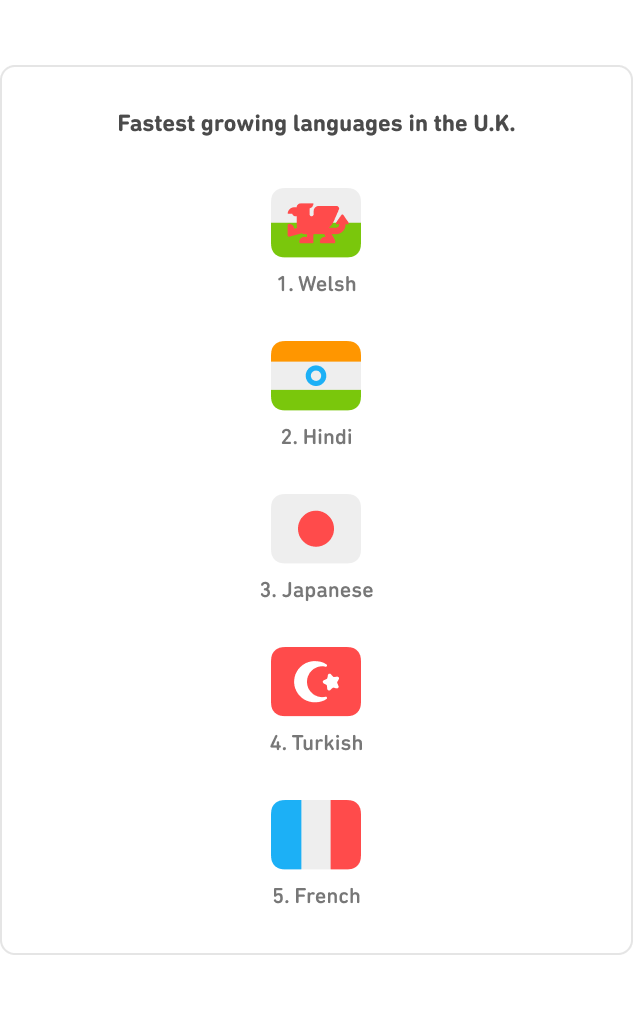 Asian languages are increasing in popularity with Hindi and Japanese both up 41% in 2020, followed by Turkish and French, both up 35%, trailing Welsh as the fastest growing languages in the U.K.

Culture was the primary motivation chosen by 16% of people learning Hindi, which suggests a growing interest in wanting to learn about Indian culture. The data also suggests many Brits want to learn Hindi to communicate with relatives, with 20% choosing family as their primary motivation.

The growth in Japanese points to culture being an important motivator with learners as they want to connect with Japanese art forms including manga and anime. Japanese’s popularity globally has increased to such an extent there are now almost as many Japanese learners as there are Italian learners, including here in the U.K.

The rise also coincides with two major sporting events in Japan, the postponed 2020 Tokyo Olympics and 2019 Rugby World Cup, where England’s head coach had the squad learn Japanese to help them prepare mentally and engage culturally at the tournament, Has TeamGB Chef de Mission Mike England and his colleagues at the British Olympic Association followed suit and encouraged British athletes and coaches to learn Japanese before Tokyo 2021?

Globally the U.K. is now one of the hardest working nations on earth ranking 11th out of 194 countries measured by average number of lessons completed, with fellow English-speaking nations Australia in 22nd and the U.S. 68th. The U.K is also now one of Duolingo’s top 5 countries by total number of daily learners.

Domestically, England is the hardest working home nation by average number of lessons completed with Northern Ireland last. With dedication and maintaining the longest streaks Northern Ireland is top and England last.

Regionally, Tameside in Manchester has the most dedicated learners in the U.K. with the longest streaks, followed by London’s Tower Hamlets, Kensington & Chelsea, and Hillingdon, with Antrim & Newtownabbey near Belfast rounding out the top 5.

Most dedicated language learners in the U.K.

Hull is top when it comes to the hardest working place in the U.K. with Bristol, Edinburgh, Plymouth, and Renfrewshire in Scotland making up the top 5.

The most popular courses studied in the U.K. are Spanish followed by French, German, Italian and the U.K.’s second fastest growing language Japanese in fifth place. When you examine languages studied, not individual courses, English is the fourth most popular language in the U.K, which is likely down to English as a second language learners studying from their own language. 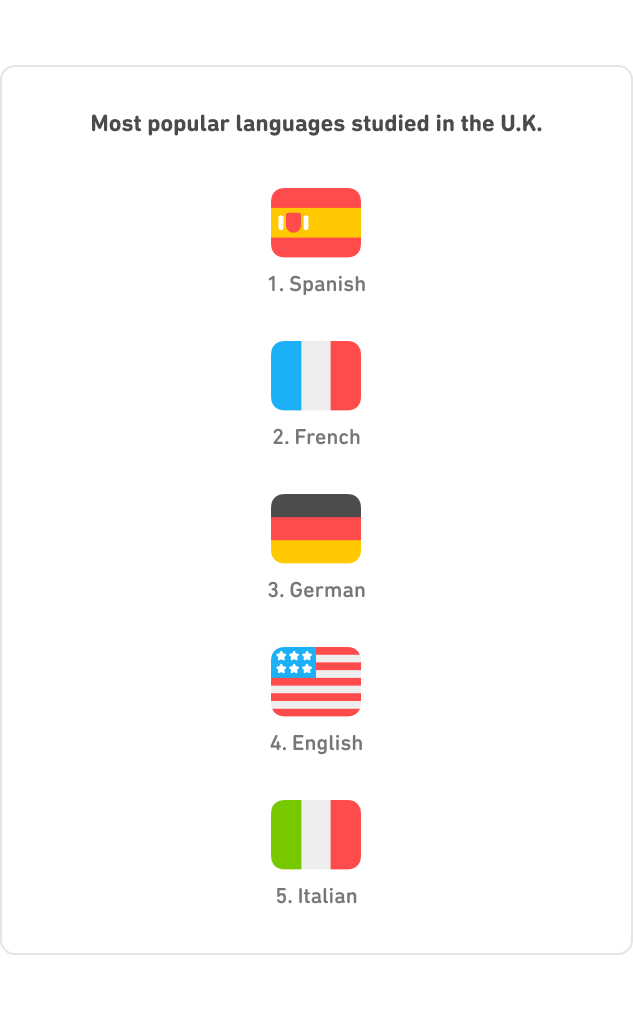 The data also shows just five countries got older last year: Latvia, the U.K., Finland, Ireland and Estonia, with the median age on Duolingo rising to 26 in the U.K. This contrasts to other major markets for Duolingo like the US where learners got younger.

Globally, English is the world’s lingua franca and the most popular language in 121 countries (62% of all countries), and second in eight countries. In Yemen, Vietnam, the Dominican Republic, Burkina Faso, Saudi Arabia, and Guatemala between 70% and 80% of learners study English. In countries with English as an official language - Nigeria, Zimbabwe, Jamaica, the Philippines, and Botswana - fewer than 4% study English. 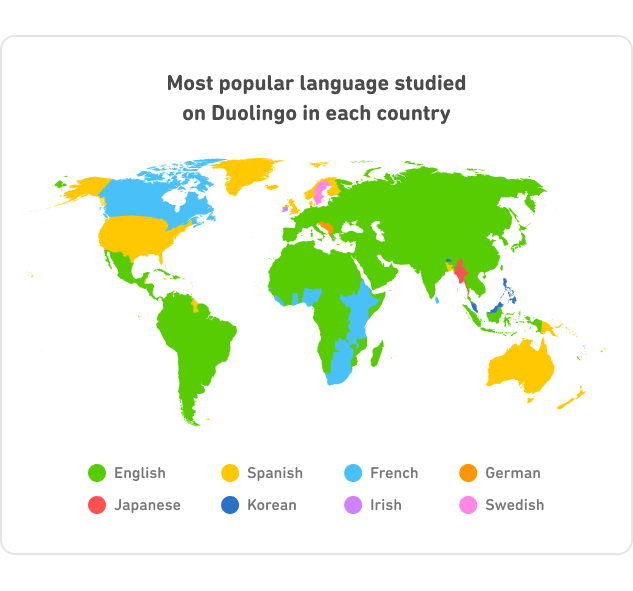 In Ireland, Irish is now the fastest growing language (ahead of Hindi and Japanese) and the number one language to learn amongst all learners. Irish was behind Spanish but has increased 42% year-over-year compared to Spanish, which grew just 10%. In 2020 38% of all new learners in Ireland joined for school. 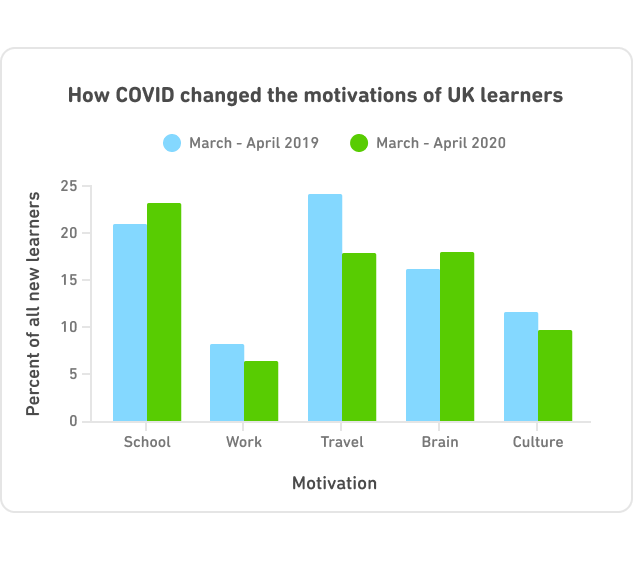 Covid and language learning in the U.K.

The British Council surveyed 2000 people during lockdown with 10% stating they had started learning a new language or returned to learning one after a break during Covid. This is supported by new user growth on Duolingo in the U.K. which was up 132% year over year in the weeks immediately after the first Covid lockdown.

The same survey also identified most adults regretted their experiences of language-learning and stated it was important for children to study languages - with 66% saying languages should be compulsory at primary school and 79% at secondary. In England, languages have been a statutory part of the curriculum at Key Stages 2 and 3 since 2014, yet despite this, fewer people are studying languages at secondary and degree level compared to the beginning of the century. 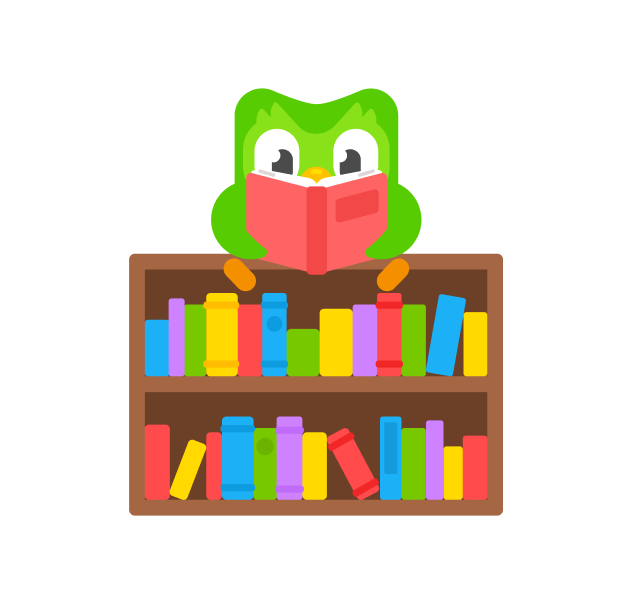 It is here Duolingo has provided people with an outlet to learn at a time and place that is convenient to them. The data points to people in the U.K. now choosing to learn languages for many reasons and because they have access. It shows the decline in language learning is not irreversible and what many have attributed to an unwillingness from Brits to learn a language can be corrected with free access to courses and technology.

*Scottish Gaelic is one of the newest courses available on Duolingo and was released on St Andrew's Day 2019. It's too new to be a contender for fastest growing languages, but it's off to an impressive start: the course acquired 570,000 learners in under a year, ten times the number of native speakers recorded in the 2011 census.