Making New Year’s resolutions to improve oneself is a popular practice
around the world. Yet, keeping those resolutions is known to be difficult: people tend to choose unrealistic goals that they then fail to sustain over a long period of time. Is making resolutions with Duolingo any different? Duolingo’s format helps: lessons are short and bite-sized, the experience is gamified, and only five minutes a day of practice is enough.

With Duolingo’s user base of 120 million language learners, we decided to find out:

In late December 2016, Duolingo launched a New Year’s Resolutions campaign (see Fig. 1). Our message was simple and direct: learning a language with Duolingo is a good choice for a New Year’s resolution because it’s doable and worth the effort. Learning a second language can change lives in significant ways! 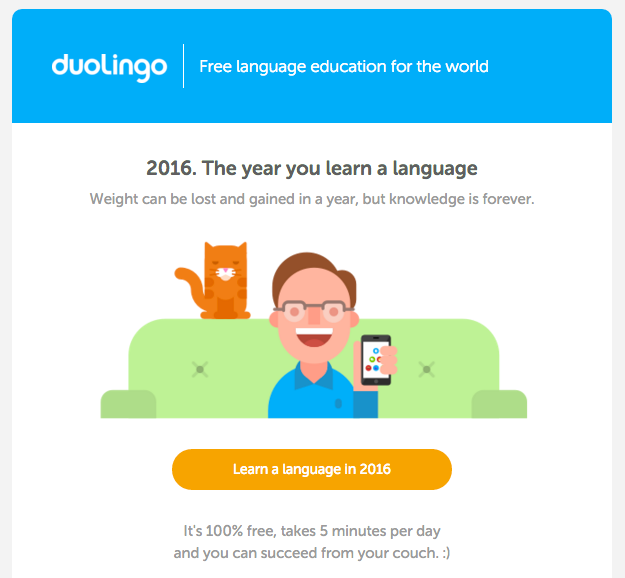 Duolingo’s campaign went into full force on December 29th. We sent out over 60 million newsletters in 15 different languages. Even some celebrities helped promote the cause.

Every New Year we see a bump in Duolingo usage and new user sign-up. This year, however, the bump closely matched the timing of our campaign: there was a clear peak on December 30th in both the number of new users (Fig. 2 in red) and the number of Duolingo sessions for existing long time users (Fig. 2 in teal; note that the sign-ups and sessions in the figure are on different scales). Remarkably, Duolingo seems to have made people get on with their New Year’s resolution even before the New Year started! 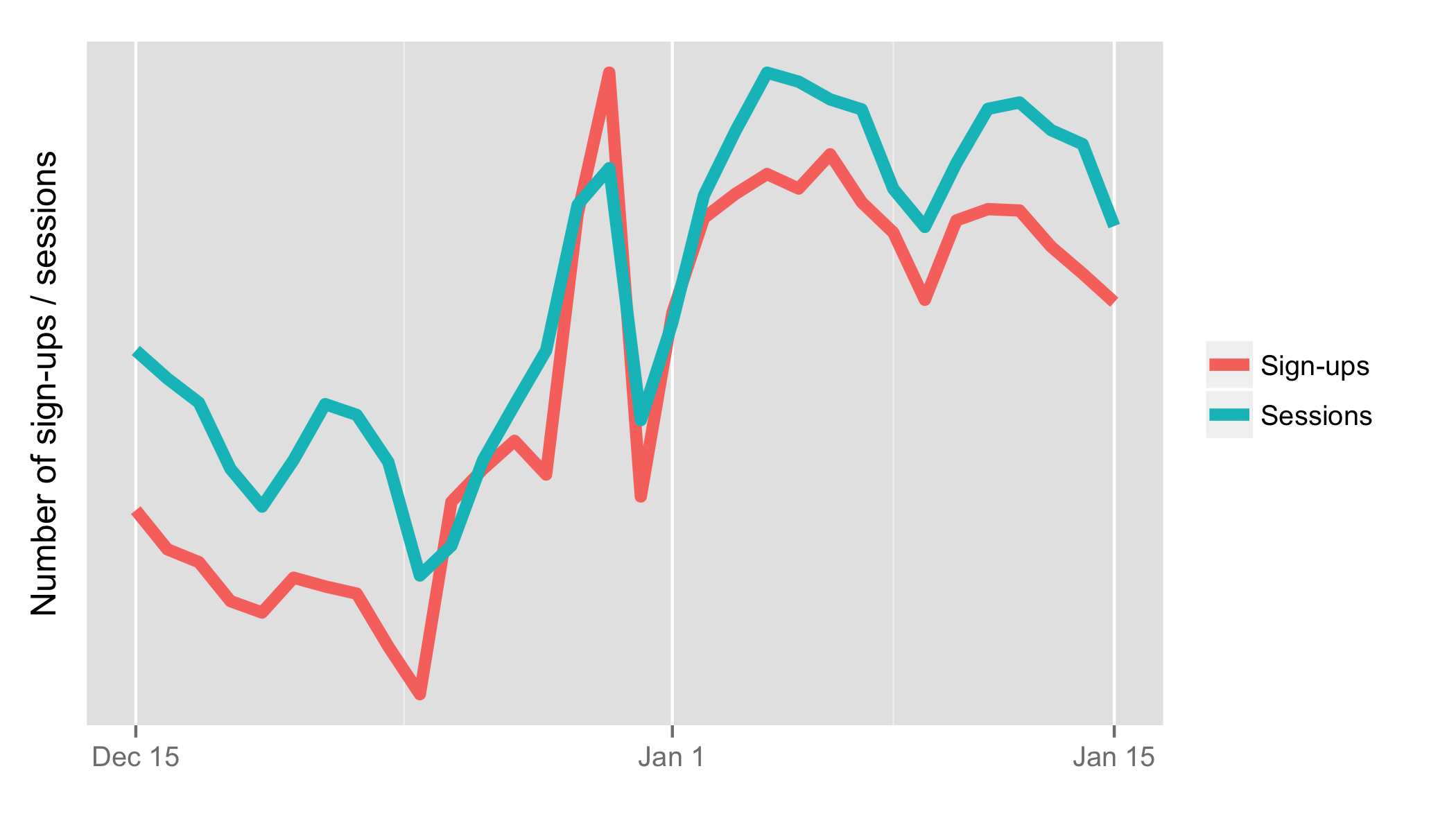 Which countries led the New Year’s rise in users?

The main countries responsible for the peak in new users (sign-ups between Dec 29 and Jan 4) were our usual suspects: the United States, Brazil, and Mexico. Most of our new users on any given day come from these three countries.

But there were some surprises among the remaining top 10 countries. Although the top 10 list is usually similar over time, the order got shuffled around New Year (see Fig. 3). Users in Germany seemed to have taken their New Year’s resolutions particularly seriously: they jumped seven spots up from their usual position to take 4th place in the ranking. Colombia, on the other hand, dropped from 4th to 9th, and China — in the top 10 in 2015 — dropped from 8th to 12th place. 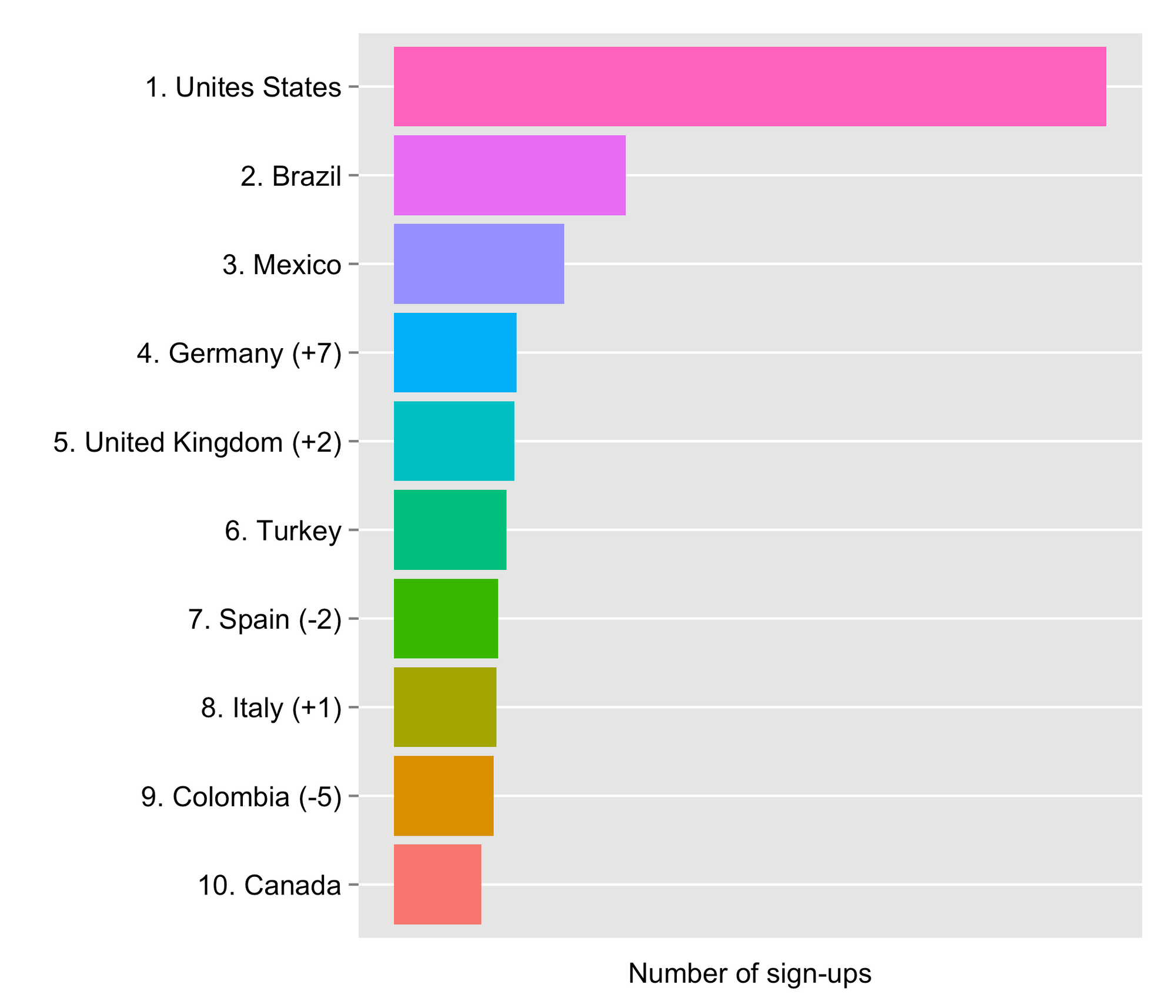 But how about proportional growth? That is, which countries grew the most around New Year 2016 relative to themselves? For each country, we looked at the number of users active on Duolingo from October through December 2015. Then, we took the number of new users signing up between December 29th and January 4th, and calculated the percent increase.

The top three countries were India, Taiwan, and Yemen, with a nearly 6% increase! The three bottom countries were Kyrgyzstan, Iceland, and... Mexico! Despite 3rd place in numerical growth, Mexico visibly stagnated around New Year!

Did users actually stick with their New Year’s resolution?

Seeing the bump around New Year’s isn’t enough to deem this New Year’s Resolutions campaign a victory — it could be that people were signing up for Duolingo in hordes but abandoning it immediately. Happily, this turned out not to be the case.

Figure 4. Proportion of users who signed up and were still active on Duolingo in the next 5-30 days. 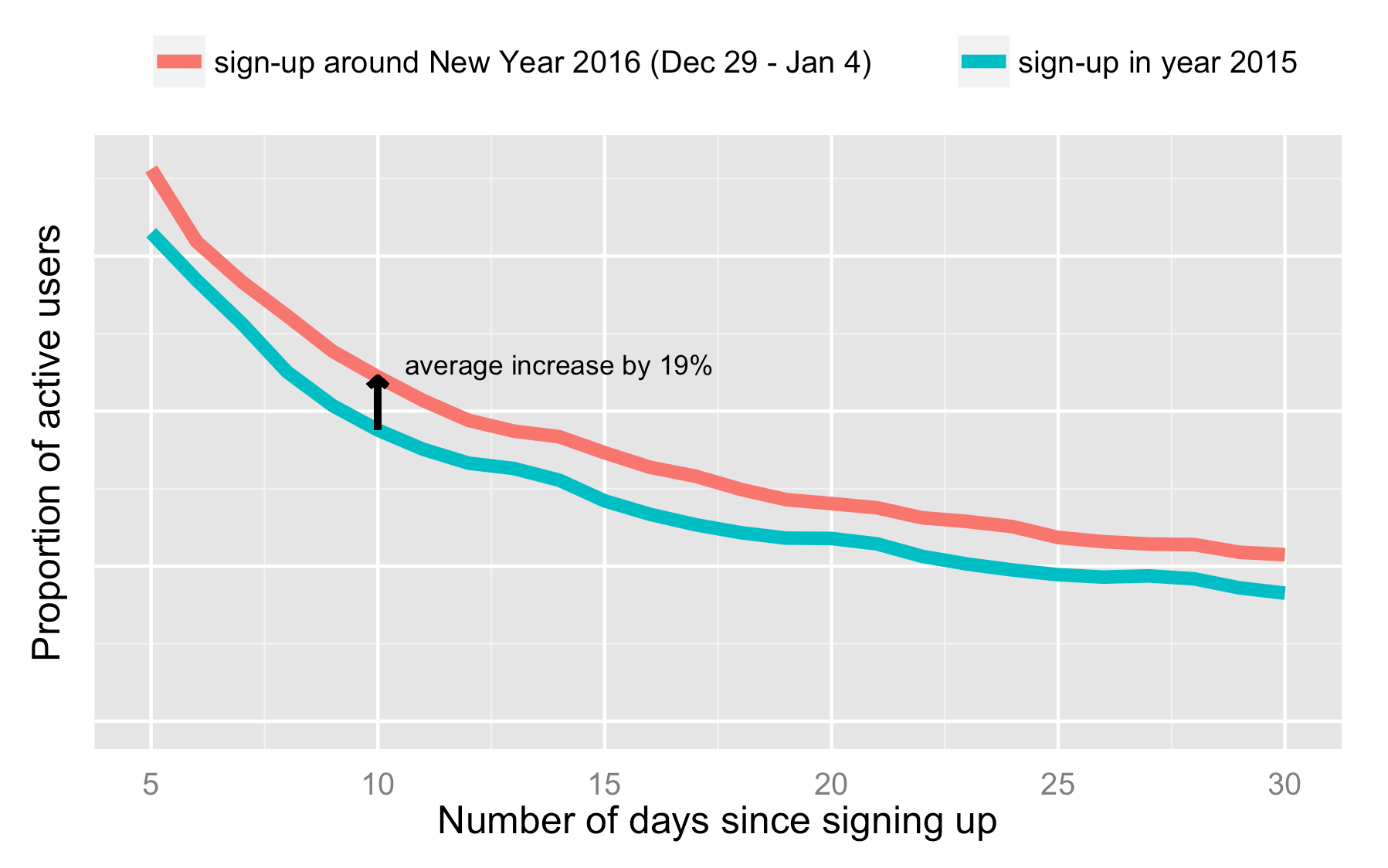 Which countries had the most dedicated users?

The Czech Republic, Germany, and New Zealand were the top three countries in terms of user dedication during this period. Figure 5 shows the increase in the proportion of users who were active on Duolingo across 30 days since signing up relative to the average of 2015 (the error bars are 95% confidence intervals, capturing the amount of day-to-day variability throughout the month). In the Czech Republic, the proportion of users who signed up around New Year 2016 and were active in the next 30 days was larger than for a typical group of users in 2015 by over 75%! The users from the Czech Republic are in fact generally highly dedicated: compared to the users in the United States, they complete on average 10% more sessions per day and are active more days every week (3.4 vs 2.6 days).

Figure 5. Percent increase in the proportion of users who signed up and were still active on Duolingo in the next 30 days relative to the average of year 2015. 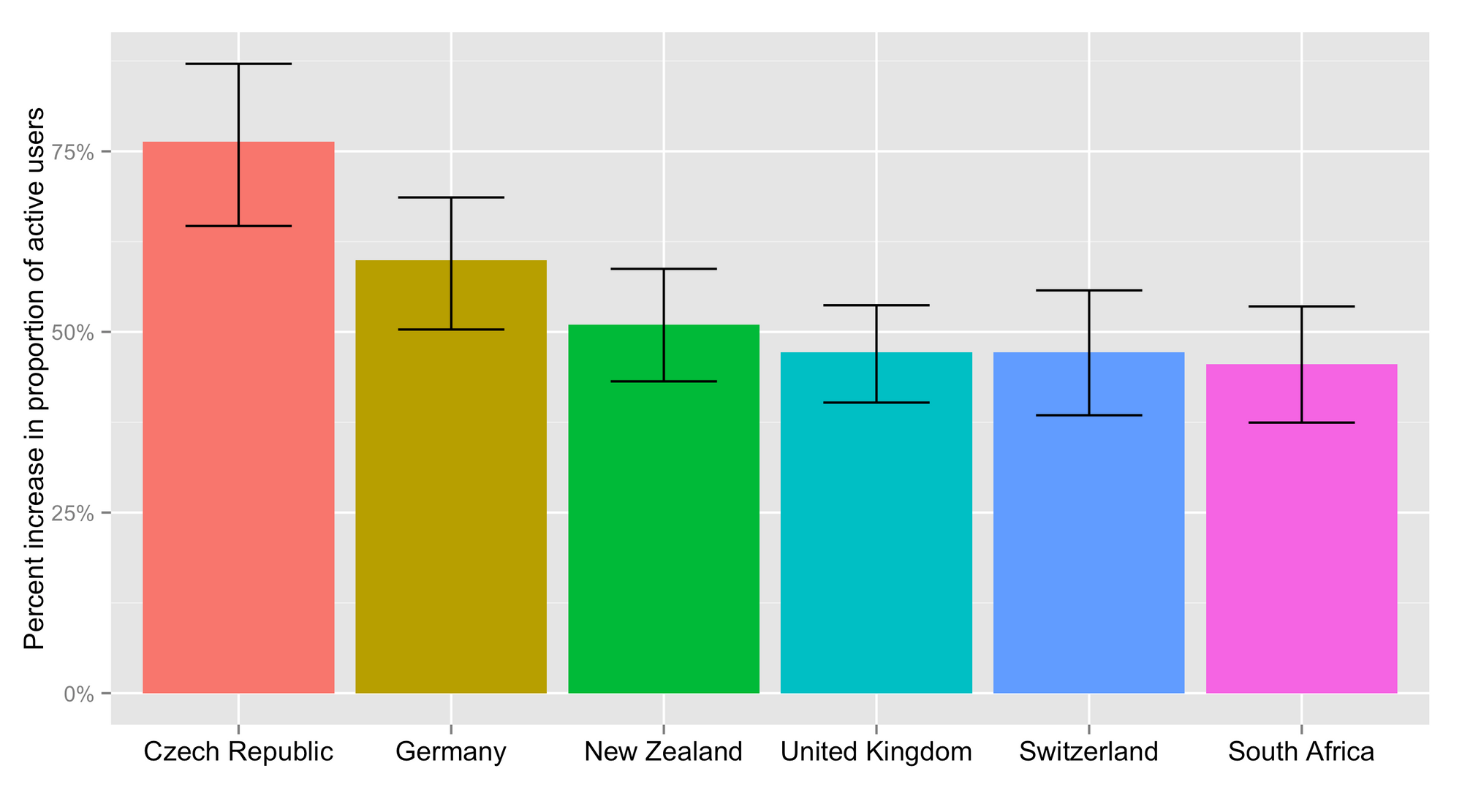 The least dedicated user groups from the New Year 2016 sign-ups were in Malaysia, China, and Pakistan. Not only did China drop in terms of numerical sign-up around New Year, but also the users who did sign up were among the least dedicated. But perhaps this is not entirely fair, since the Chinese New Year 2016 was not celebrated until February 8th and making resolutions is just not as common.

How long did the effect of the New Year’s resolutions last?

Let’s look at the data for a more extended period of time for four countries: the Czech Republic — the country with the most dedicated users overall, the United States, Brazil, and Mexico — the top three countries in terms of numerical growth around New Year 2016. Figure 6 shows the proportion of users who signed up for Duolingo around New Year 2016 (Dec 29 - Jan 4) and were still active in the next 60 days, as compared to the average of 2015 (in magenta).

Figure 6. Proportion of users who signed up for Duolingo around New Year 2016 and were still active in the next 5-60 days. 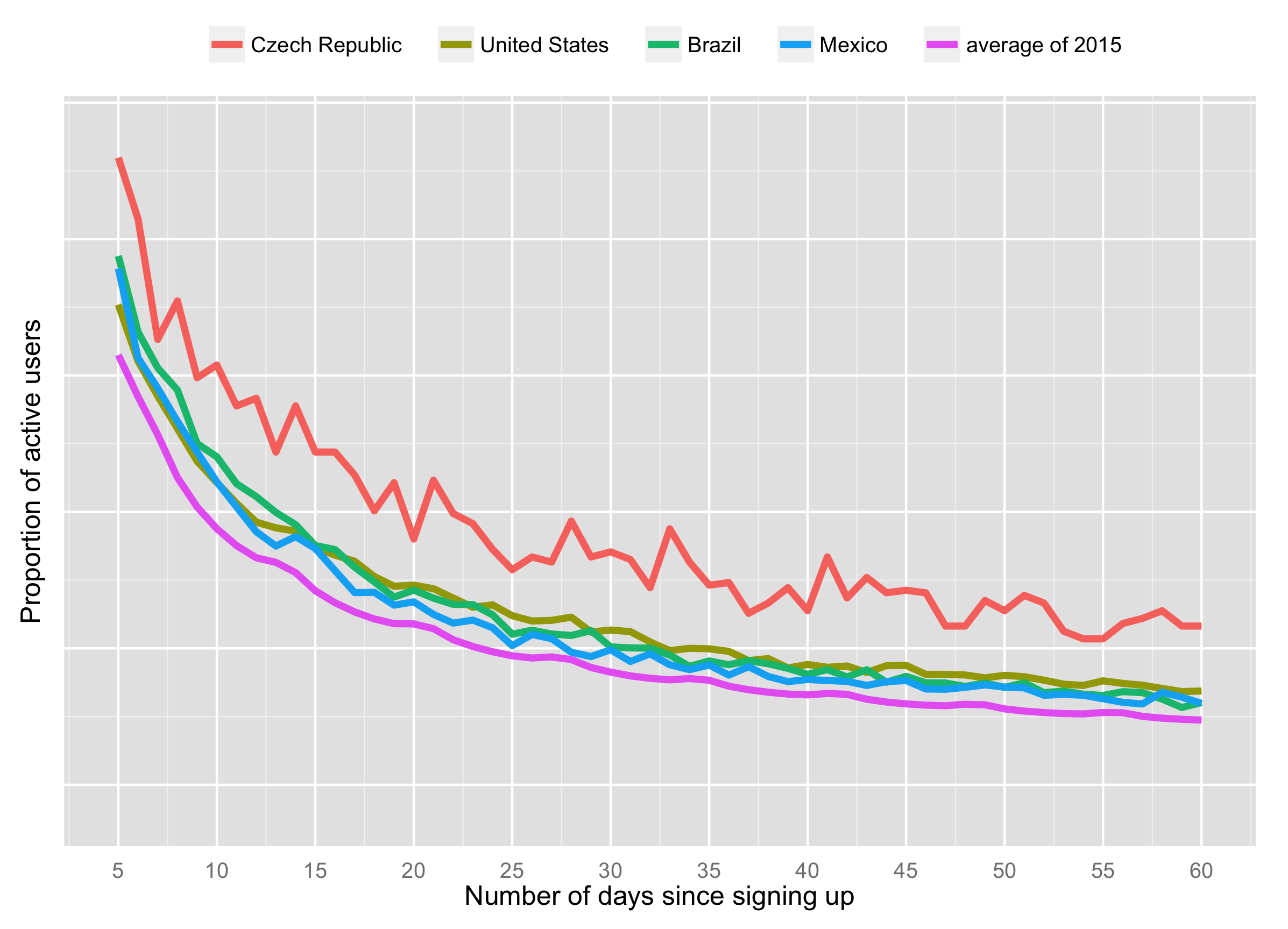 Users in the Czech Republic were by far the most impressive! Even 60 days after signing up, the proportion of users still active on Duolingo remained much higher than was typical in 2015. Brazil and Mexico started higher than the United States, and so perhaps there was initially a stronger interest in New Year’s resolutions, but that quickly faded — especially in Mexico, where the drop in active users was the most dramatic. But even in Mexico, which was among the countries with the least dedicated New Year users, the New Year sign-up group remained more active on Duolingo than a typical user group in 2015. This suggests that many users persisted in their New Year’s resolution to learn a language on Duolingo!

This is the end of our 2016 New Year’s resolutions data analysis. There were more questions than we could answer in this blog post, but we’ll periodically post updates and other interesting bits of data.

Keep up with your language learning, and remember that a New Year is not the only time to start a free, painless and life-changing commitment!