This fall’s incoming university class was the first to experience an admissions cycle entirely during the global pandemic. More students than ever took the Duolingo English Test, revealing the global scale of Duolingo’s test takers and the 12,000+ cities in which they live. Most took the test from the comfort and safety of their own homes, and shared their certified results with over 3,500 accepting institutions.

English-medium education is experiencing exponential growth around the world, as many view it as a passport to career success. This demand extends well beyond major metro areas, with students in regional cities and rural areas wanting to pursue a quality English-language education to participate in the globalized economy. However, test centers remain concentrated in major metropolitan areas, limiting access to opportunities.

The Duolingo model of at-home, on-demand English language testing overcomes the limitations of geography, time, and cost of the physical test center approach — all while remaining highly reliable and secure. At-home testing has offered a safer and more accessible alternative to in-person testing, especially throughout the pandemic. It’s unlikely that students will welcome a return to the status quo when assessment technology has proven that high quality at-home testing is possible for hundreds of thousands of students.

Our data from the last admissions cycle provides rich insight into the geographic distribution of students interested in studying abroad and the need for a truly global English proficiency test.

Snapshot: Number of Duolingo English Test taker cities in a range of countries and regions

Read on to dive deeper into these insights…

At-home testing and "the new normal"

Competition for physical test center seats is fierce. The limited availability of testing center appointments means that students are often forced to pay additional travel costs as they cross borders to secure a test seat. This is something Duolingo’s CEO and co-founder, Luis von Ahn, knows all too well. A former international student, he was forced to navigate conflict in his own country of Guatemala, and travel to the neighboring country of El Salvador, to take an English test. Had he not been willing to take the risk, or able to pay for the journey, his path to an international education would have come to a close — a stark reality for countless international students each year.

We knew there was a better way.

Because the Duolingo English Test can be taken anywhere there's an internet connection, we're able to reach test takers in far more cities than those with testing centers — providing valuable insight into where qualified students are coming from, and highlighting just how underserved many students are when it comes to accessing physical test centers.

From Ahmedabad to Zapopan, and everywhere in between

When we look at Duolingo’s highest volume cities there are few surprises, with major mobility hubs in China and India taking the lead. However, there is also strong representation from cities that already host non-native English speakers who must take a proficiency test to apply to university — Toronto and Vancouver, New York and Los Angeles. 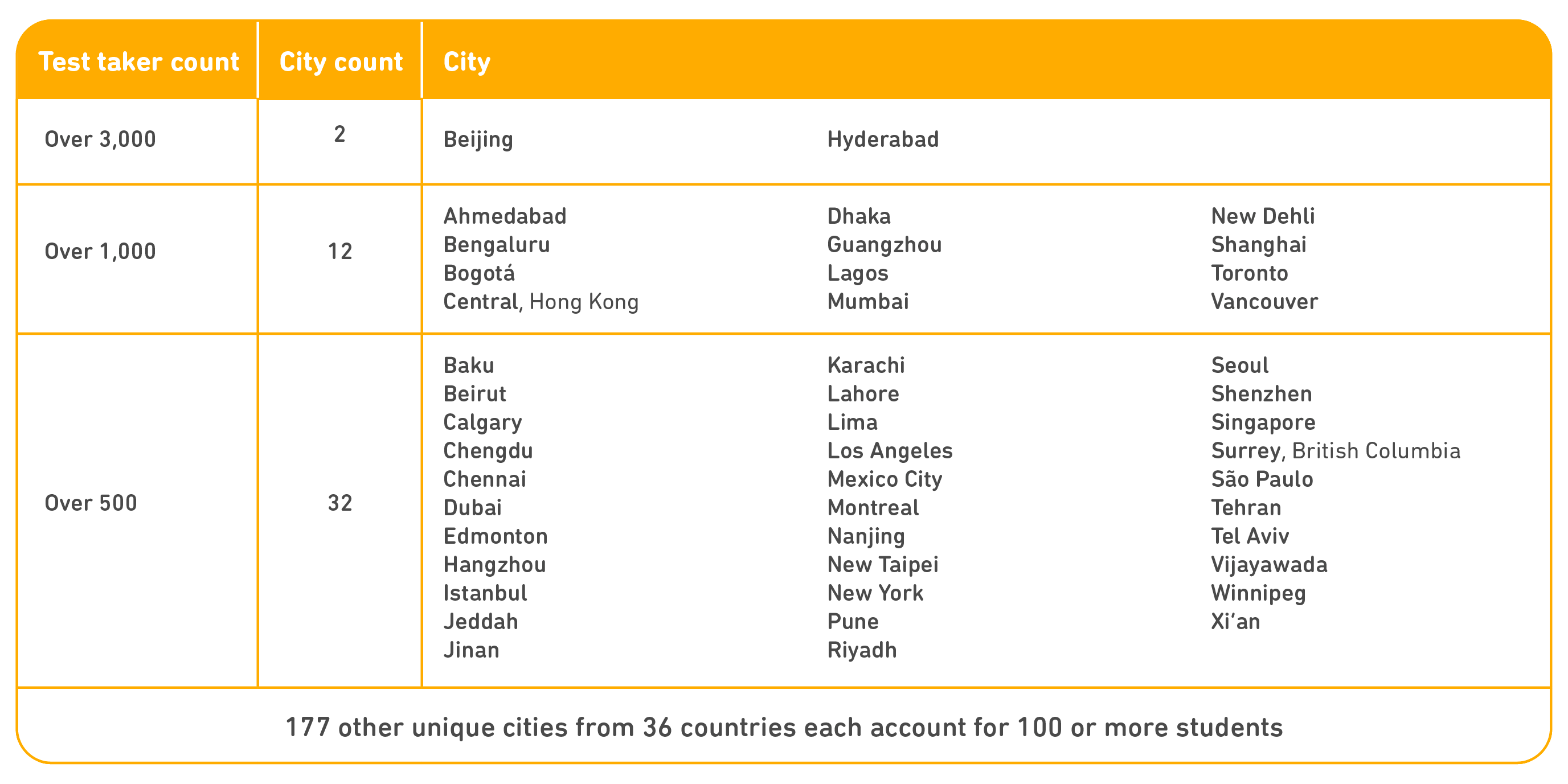 The cities with the most Duolingo English Test takers
Alphabetized data showing test taker volume by location during the August 1, 2020 - July 31, 2021 admissions cycle.

These "high volume" cities, those with 500 test takers or more, only represent a third of all university-bound Duolingo English Test takers worldwide. Other global cities with 100 or more test takers begin to show the breadth of the Duolingo English Test’s reach — spanning every continent, except Antarctica, and featuring 36 different countries. Even here, though, we're still left with a further 40% of test takers unaccounted for. There are students everywhere who have the ambition to study internationally.

Top 10 cities in our top 5 countries 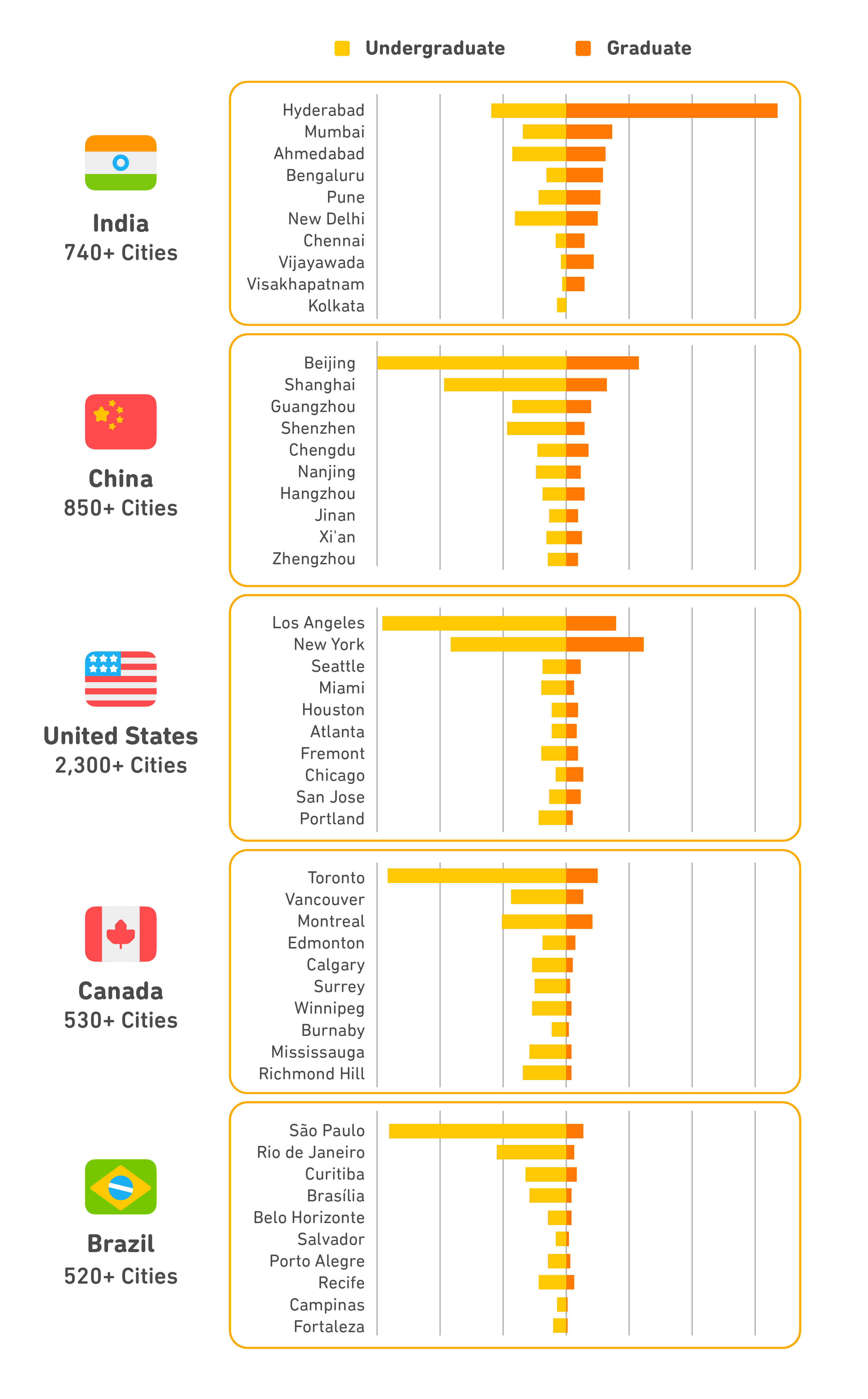 Top 10 Cities in India, China, the U.S., Canada, and Brazil for the Duolingo English Test

Interestingly, when we apply a "cities" lens to our five highest volume countries, we see that the academic goals of prospective students choosing to take the Duolingo English Test varies city by city. National trends may show stark preferences — Indian Duolingo English Test takers have a clear preference for postgraduate studies; China, the U.S., Canada and Brazil for undergraduate — but at the city level there are a multiplicity of different stories.

India recently overtook China as the largest market for the Duolingo English Test, with people taking the test in almost 750 cities over the last year, and over 1,000 since it was launched. India is one of the leading countries of origin of international students, and while English is a first language for many Indian applicants, this is not universally the case; this makes proof of English proficiency all the more important.

India traditionally has a large number of physical test centers — however, they often fall short of test taker demand. While India’s 10 highest volume cities account for 60% of all Indian Duolingo English Test takers, a large minority — 40% — are distributed right across the country. The geographic distribution of test takers in India demonstrates the pressing need for a radically more accessible option to provide equitable access to English proficiency testing.

The geographic diversity of our test takers is a testament to the global depth of interest in international study destinations, and underpins Duolingo’s mission to make quality education universally available.

Students from across the world in cities large and small want to study internationally, and we are committed to meeting them where they are. By freeing English proficiency testing from the test-center model, we are opening doors for thousands of test-takers who otherwise wouldn’t have the opportunity to follow their dreams of pursuing international education. With the Duolingo English Test, the world is your test center.

Notes:
This post is based on Duolingo English Test data for the academic recruiting cycle, August 1, 2020 to July 31, 2021. Data referenced throughout the article is based on the number of test takers with a shared result in each town and city. The exception to this is the undergraduate and postgraduate weighting in the visualization showing top 10 cities in India, China, the U.S., Canada and Brazil, which is based on score-share data.