Now that it’s January, it’s out with the winter holidays and in with New Year’s resolutions. Whether it’s losing weight, saving money, or learning something new, millions of people around the world resolve to better themselves at the beginning of every year.

Learning a new language happens to be one of the most popular resolutions worldwide. In fact, this past New Year’s, more people Googled "learn language” than “get fit.” Duolingo actually sees its largest spike in users during this period, many of whom are drawn to the bite-sized lessons, game-like experience and daily commitment of just a few minutes of practice.

Duolingo surveyed 6,534 adults in the U.S., Brazil and Mexico about their New Year’s resolutions[1]. Our results show interesting variations across geographies, gender and age about people’s goals and motivations for the New Year.

Here are some quick highlights of the most interesting findings, with more details on the results below:

When asked about the New Year’s resolutions that respondents planned to make for 2017, the top three were: “Enjoy life to the fullest,” “stay fit and healthy,” and “save more money.”

About 21% of total respondents said “learning a new language” is one of their resolutions for 2017. However, we found that interest in learning a language varies a great deal by country.

Reasons for learning a language vary across countries and age groups

Why do people want to learn a new language in the first place? Just as with New Year’s resolutions, we found that motivations for learning languages differ from country to country (see Fig. 1), as well as by age group.

Differences in motivations across countries

In Mexico, the primary reason selected to learn a language is “to improve language skills for work/school” (36%). This is not surprising, as a recent study found that learning English in Mexico correlates strongly with better employment prospects and quality of life.

In Brazil, it’s all about wanderlust: the highest proportion of Brazilian respondents (30.3%) selected “to make international travel easier” as their primary motivation for learning a language.

And in the U.S., the primary reason (among 23.8% of respondents) for learning a language is “to challenge myself.”

Figure 1. Reasons for learning a language, by country. 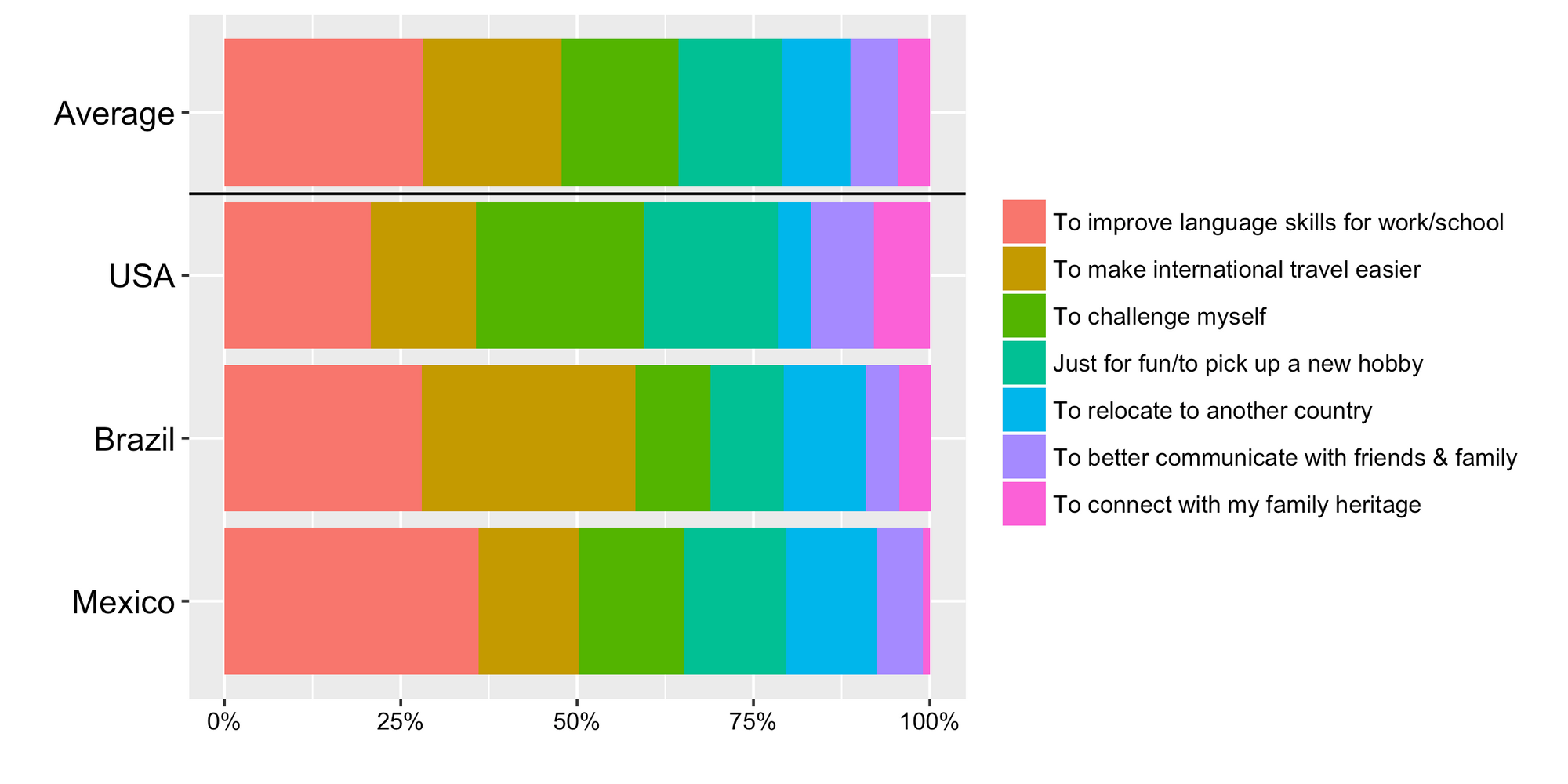 Differences in motivations across age groups

As with countries, we identified some interesting differences among age groups in their motivations to learn languages (see Fig. 2).

Figure 2. Reasons for learning a language, by age group. 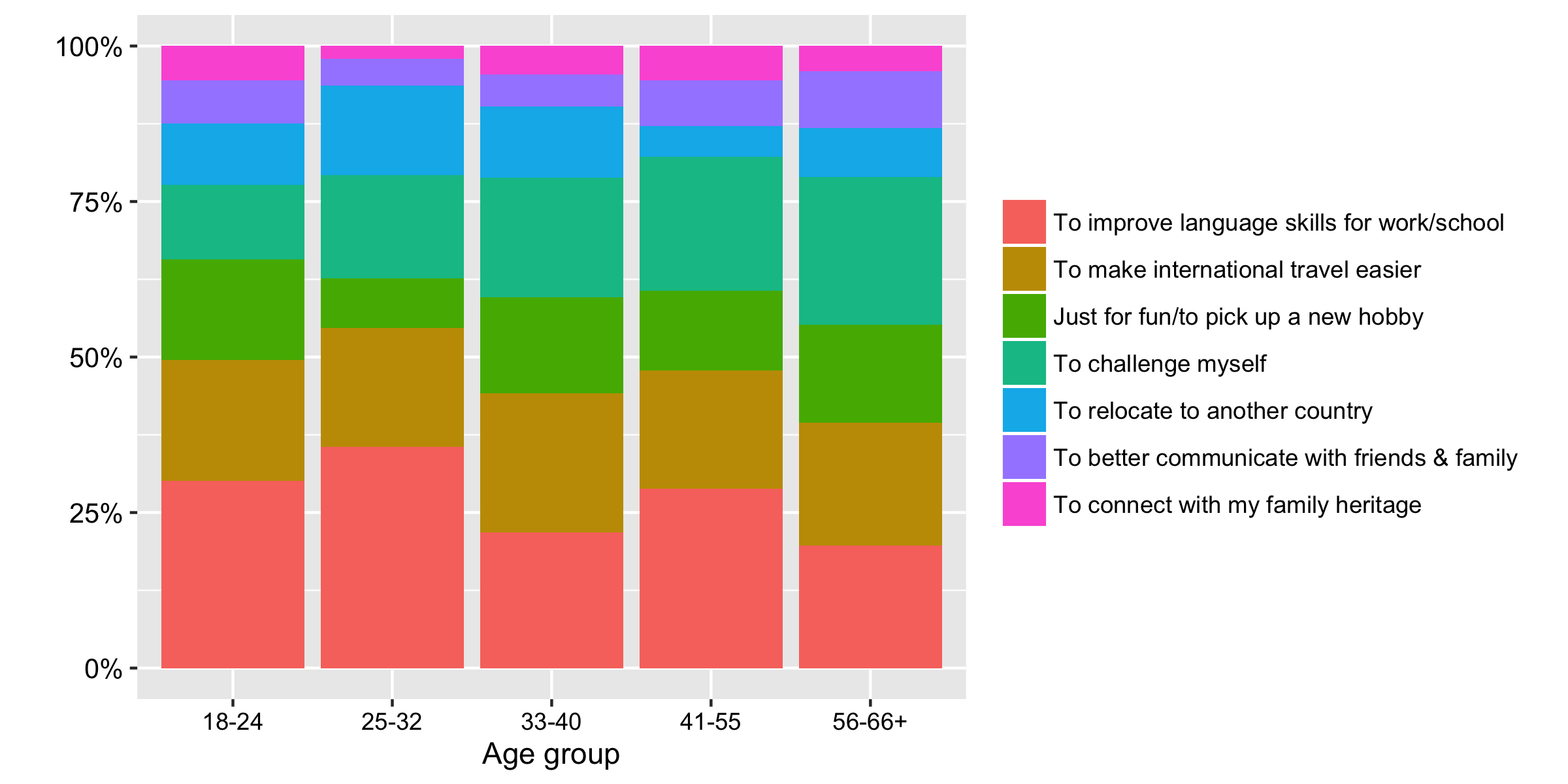 Language choices vary across geographies and genders, too

We also found intriguing variations in the languages people choose to learn, with the biggest differences related to geography and gender.

Language choices according to geography

Unsurprisingly, the languages people prefer to learn depend a lot on where they live (see Fig. 3). In the U.S., most respondents chose Spanish as the language they plan to learn this year (45.3%), followed by French and German.

Figure 3. Top three languages to learn in 2017, by country 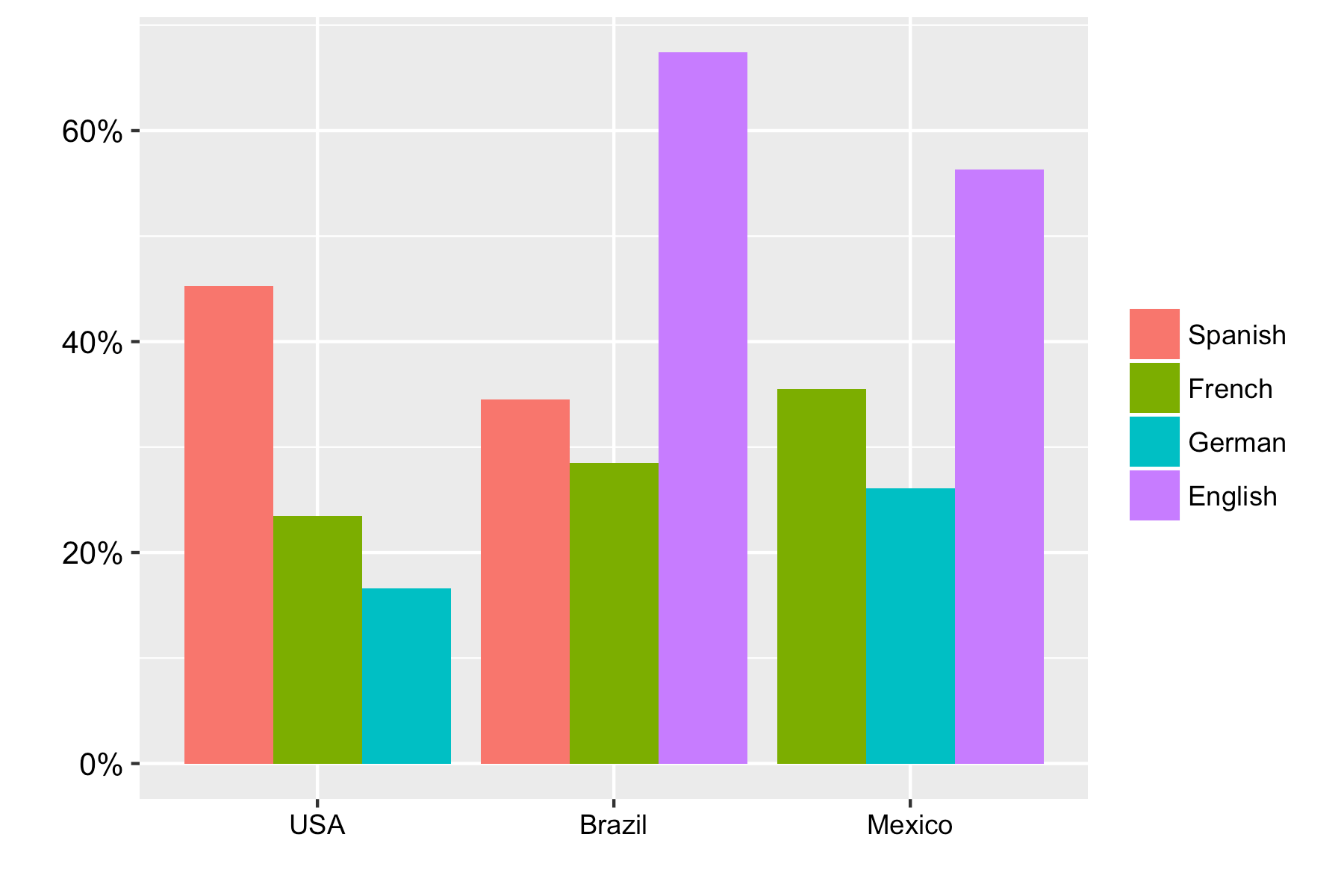 Language choices according to gender

Figure 4. Top three languages to learn in 2017, by country and gender. 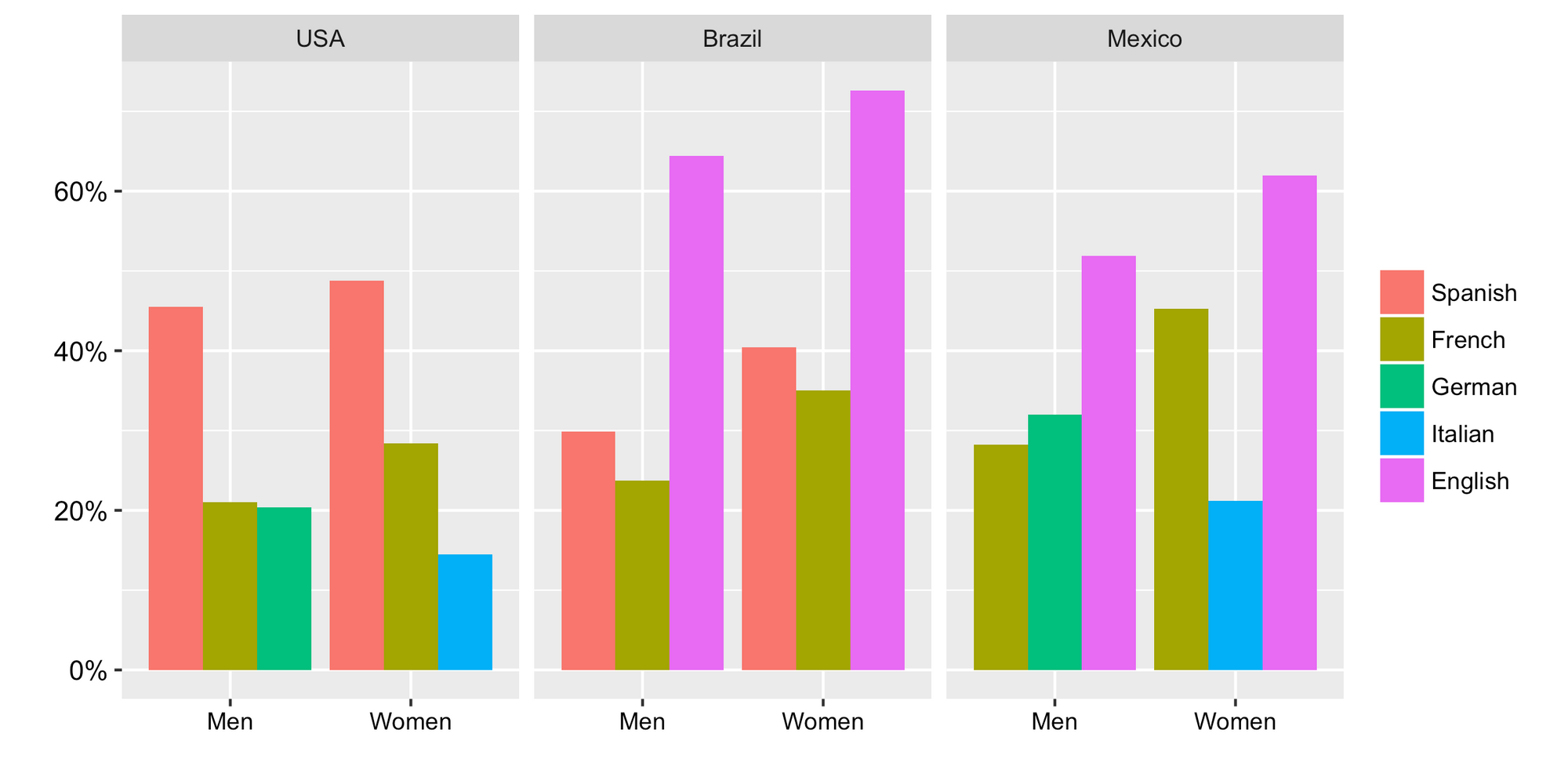 Among the most interesting findings we uncovered was how recent global events have affected people’s desires to learn new languages. With world events such as the June Brexit vote and the November election of Donald Trump as president of the United States, we weren’t surprised to see a strong response. We found that across all three countries, the vast majority of respondents feel that given current events it’s “much more important” to learn a language now than it was one year ago (70.1%).

Just as with all of our other findings, this varied from country to country (see Fig. 5). In Mexico, 82.2% of respondents said they feel it’s much more important, compared to 79% of Brazilians and 49.8% of Americans.

Figure 5. Perceptions of the importance of learning a language now, given current events, by country. 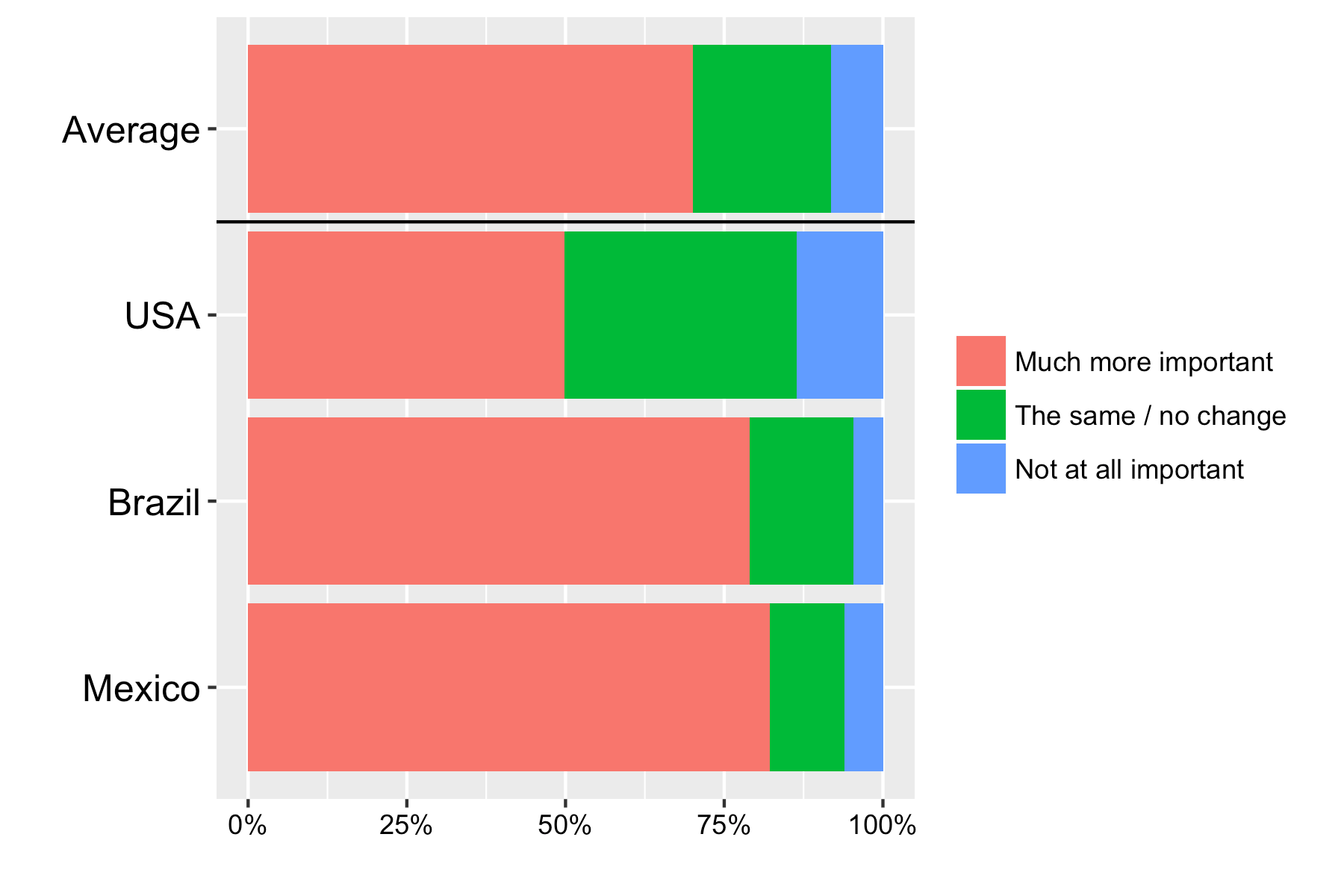 As we’ve found, geography, gender and age have a lot to do with how people approach their New Year’s resolutions, especially learning a language.

Now, whether people actually stick to their resolutions is another story (for more on that, check out our blog post last year on which countries are best at keeping their resolutions). For our part, we just introduced a new social feature called Duolingo Language Clubs to make it easier. Clubs allow friends and family members to create their own groups to keep each other on track with friendly nudging and competition. It’s like having gym buddies, but for your brain!