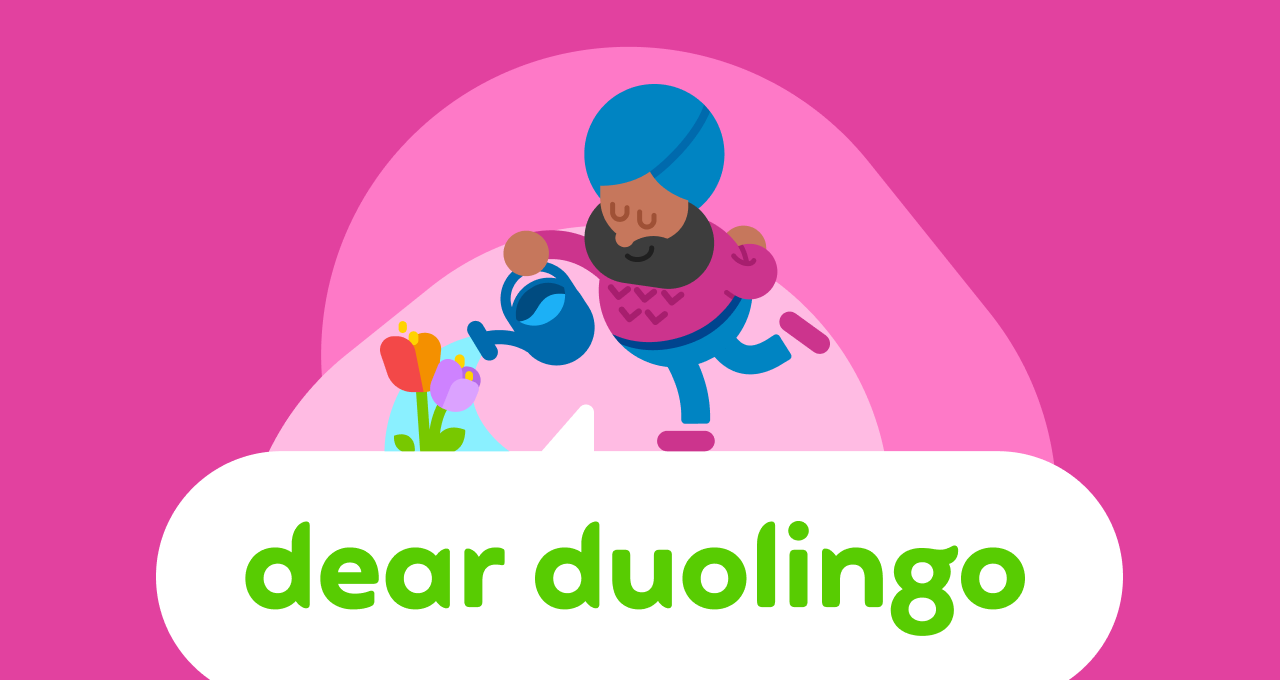 Hello hello! My name is Hope Wilson, and I’m a Learning & Curriculum Manager here at Duolingo. Before coming to Duolingo, I studied second language acquisition at The Ohio State University, where I also did some work on language forgetting. So this week’s Dear Duolingo topic is a real trip down memory lane. Get it?? Memory lane?? Eh???

Okay, okay, stop booing at my pun, let’s just get to the question.

Long ago, in high school, I studied French and actually knew it pretty well! Now I'm thinking about either starting with a brand-new language (Spanish?) or going back to French. Is there any advantage to French? I could tell you a few words but not much more, so I feel like I might as well start from the beginning with something else.

I’m delighted to be able to tell you that your French may be forgotten, but it’s not gone. If you go back to French, you’ll be able to re-access memories you likely thought were lost to you, and you’ll progress far more quickly than you did when you were studying French the first time! Much like riding a bicycle, you’ll find that your skills are still there, buried in your brain and muscle memory, and that with a bit of structured practice, you’ll be avoiring and etreing like you were in the old days.

Curious why that is? Let’s explore the “savings paradigm” and how it applies to language!

Have you ever forgotten someone’s name? Or something you wanted to buy at the grocery store? Or where you put your favorite pen? Maybe you retraced your steps, imagining yourself going through the act of putting down that pen. Maybe when you forgot that name, you had a vague sense of what that name was— I know it starts with an "m"— and you tried to reconstruct the sounds you knew. Maybe when trying to remember what you wanted to buy, you went through a mental picture of your refrigerator.

In each of these instances, you aren’t trying to construct new information. Rather, you’re effectively using techniques to find information that you misplaced. At one point, you learned this information and it was fixed in your long-term memory. But when you forget something you’ve learned, the information isn’t destroyed—instead, it’s just inaccessible. It’s like a pen you’ve put in a drawer: It’s still there, but you can’t use it until you pull it out. So the process of relearning is like pulling that pen out of the drawer.

This psychological phenomenon—that relearning can happen rapidly and reliably—is called the savings paradigm or savings method. It was discovered in the late 1800s by a psychologist named Hermann Ebbinghaus. Ebbinghaus did experiments where he would first memorize lists of information, wait until he’d totally forgotten these lists, then relearn them—and time how long it took him. He reliably found that he’d relearn them way faster than he learned them in the first place: The information was saved.

Can you relearn a language you forgot?

More recently, researchers investigated whether the savings paradigm also applied to language. If you had forgotten a language, could you possibly recover it?

So scholars have focused in particular on how well people who have forgotten a language are able to relearn vocabulary. And learners are kind of amazing at relearning vocab: People recover vocabulary they’d known while abroad and words they’d learned when taking classes in their home country. There’s even an incredible case where an adoptee was able to relearn words from a language she didn’t know she’d spoken, because she’d lost all memory of it—that’s how powerful relearning can be!

How to relearn a language

So, okay. How do you re-access that saved language knowledge?

Well, you can focus on a few things. As mentioned above, you tend to forget vocabulary more than you forget grammar. So when you’re relearning the language, you actually will probably want to prioritize recovering your vocabulary. You might want to buy a frequency dictionary, which is a dictionary that lists the words of a language from most to least frequent—so you can work on relearning the most-common words first, and then work your way down to rarer ones. (Personally, I love using flashcards to learn vocabulary!) Reading is also an excellent way to recover your vocab, as is watching movies and listening to podcasts in the language. Getting a variety of practice will help reactivate your inactive knowledge!

Another approach you might take is going to a Duolingo Class or finding conversation partners. It’s an unfortunate fact that sometimes, you just don’t know what you’ve forgotten. It’s not until you start trying to use the language that you find the holes in your memory. (For example, when I was learning Russian, I came back after summer break and sat down in the classroom, totally confident in being able to describe all the cool stuff I’d done over vacation — and then realized I had completely forgotten the word for “summer”! Eek!) So if you push yourself to interact with other people, you’ll find out what you forgot…and the person you’re talking to will likely kindly help you remember!

It’s really exciting that you’re coming back to language learning, Language Lost. I'm sure it’ll be an exciting and rewarding process for you — and if you choose to relearn French, I think you’ll be delighted to see just how much you still remember. Your brain has been saving this knowledge, and it should serve you well!