It’s not surprising that Japanese had been our most-requested course. Japan’s culture is celebrated worldwide through film, food, literature, music, art, and much more, and learning Japanese opens up a whole new set of opportunities for appreciating it.

However, not only is Japanese among the most difficult languages for English speakers to learn, it is even more difficult to teach effectively. That’s why our team devoted so much time and effort to developing a course that offers a completely new method of learning Japanese.

In this blog post, we discuss the unique challenges in teaching Japanese and how we invented new ways to teach it effectively on Duolingo.

Learning Japanese is no simple feat 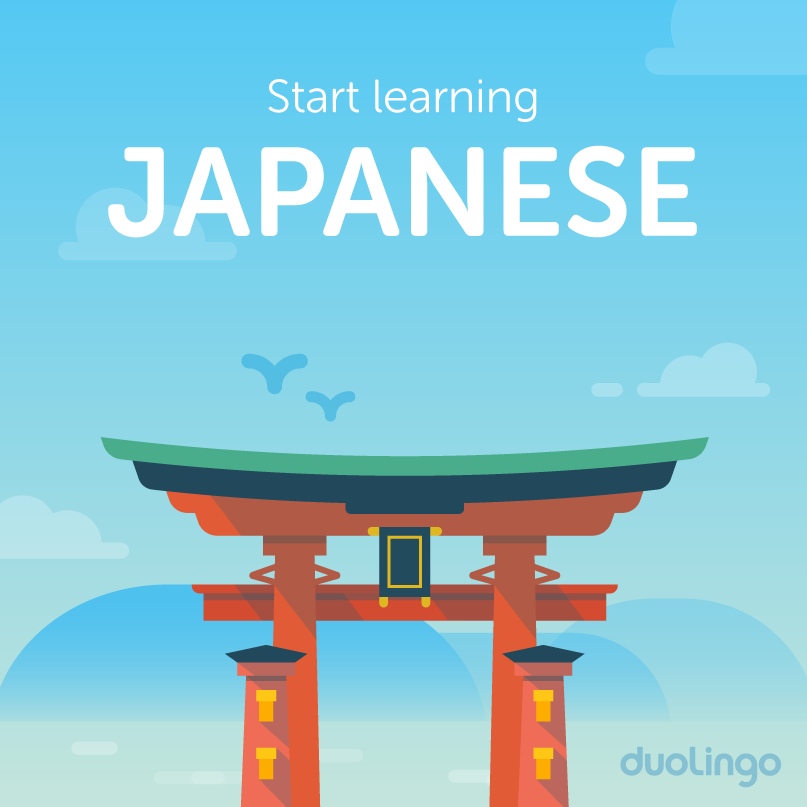 According to the Foreign Service Institute, Japanese is classified as the most difficult language to learn for English speakers, as it requires 2,200 hours of classroom study to reach professional proficiency. Even if you did nothing but study Japanese (and gave up on things like sleeping and eating), it would take 91 days and 16 hours, or about three months, to become proficient! (Disclaimer: we don’t recommend this approach.)

So, why is Japanese so difficult to learn? There are three key factors:

To show just how complex this can get, let’s take a simple English phrase – “I love you” – and dissect the many ways in which it can be said in Japanese. Spoiler alert: it’s not such a simple phrase in Japanese. One of our course contributors, Sho, estimated and found that there can actually be as many as 248,026 ways to say “I love you” in Japanese!

How is this even possible?

For one, there are several different ways to say “I” in Japanese (i.e., watashi, watakushi, boku, ore, etc.), each of which can be written in any of the three writing systems mentioned above. There are also two particles that can go with “I”, which you are actually able to omit. You can even choose to not mention “I” at all, since it is implied. This already makes 37 (4 × 3 × 3 + 1) different ways to just say “I” in Japanese.

A similar situation applies for “you”, which you can check out in the graphic below. There are even different words for “love” in Japanese, including suki, sukida, sukidesu, aisuru, aishiteiru, aishiteimasu, and more. In other words, saying “I love you” in Japanese can be as complex as love itself. 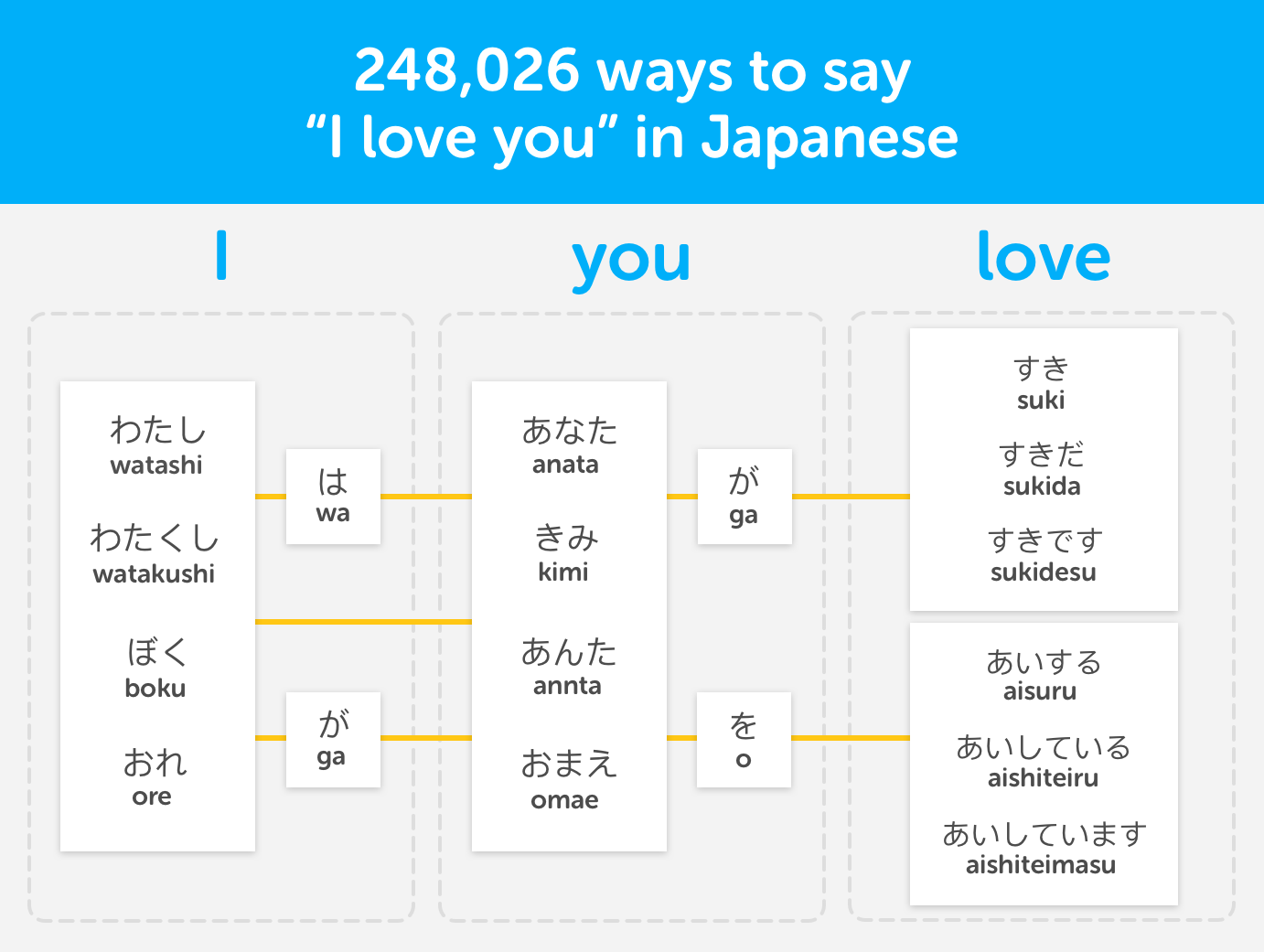 How we invented a new way to teach Japanese

We’ve established that Japanese is a difficult language to both learn and teach. At Duolingo, we invest a lot to ensure that we are teaching languages in the best way possible so that our users absorb what they learn and have fun at the same time. Japanese is no different.

Here are some of the elements that make our Japanese course unique, even among other Duolingo courses.

Our course teaches you characters (yes, even Kanji)

Although some textbooks and language classes get away with using only Romaji – the representation of Japanese sounds using the western alphabet – we strongly believe that you need to learn the basics of the writing systems to effectively communicate in Japanese. To do this, we developed a completely new set of exercises dedicated to teaching the complicated Japanese writing systems mentioned above. In our Japanese course, you can learn the shapes, pronunciations, and meanings of all Hiragana characters (there are about 50), all 50 Katakana characters, and 88 basic Kanji (Chinese) characters that you need to know in order to reach basic proficiency. 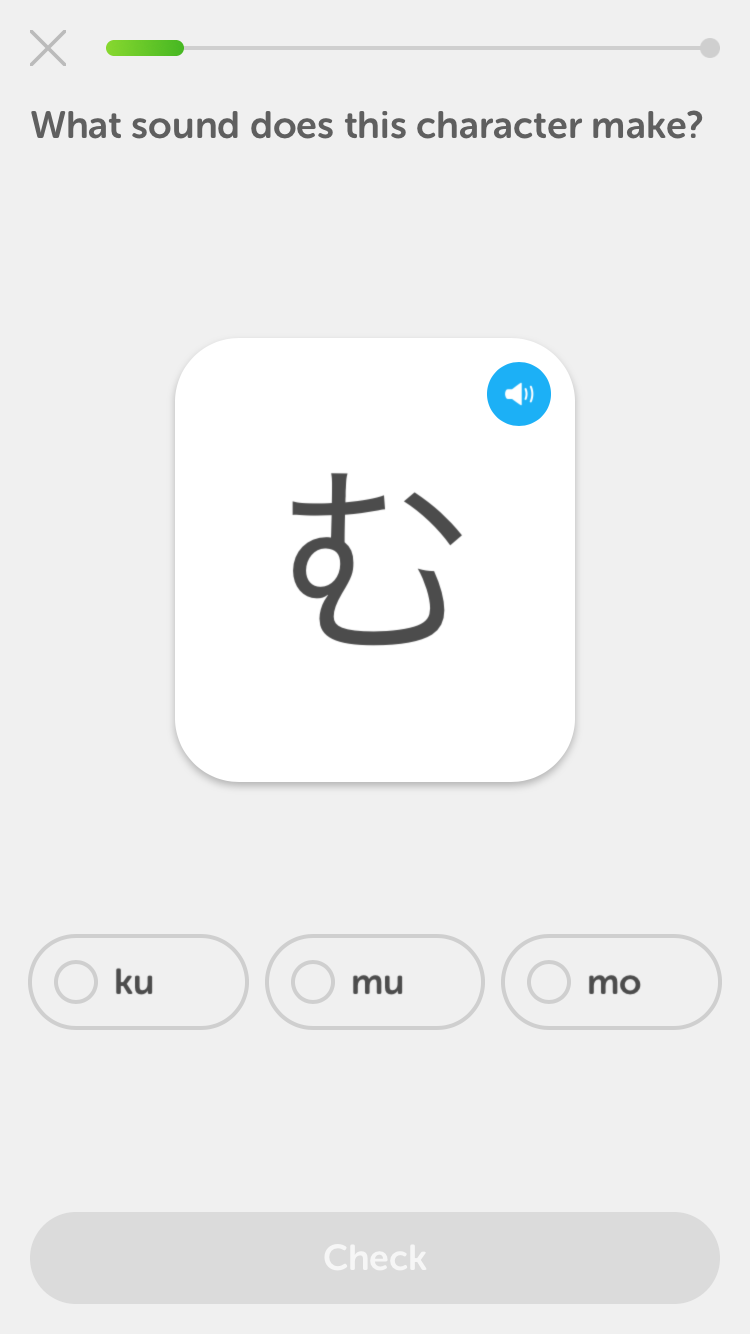 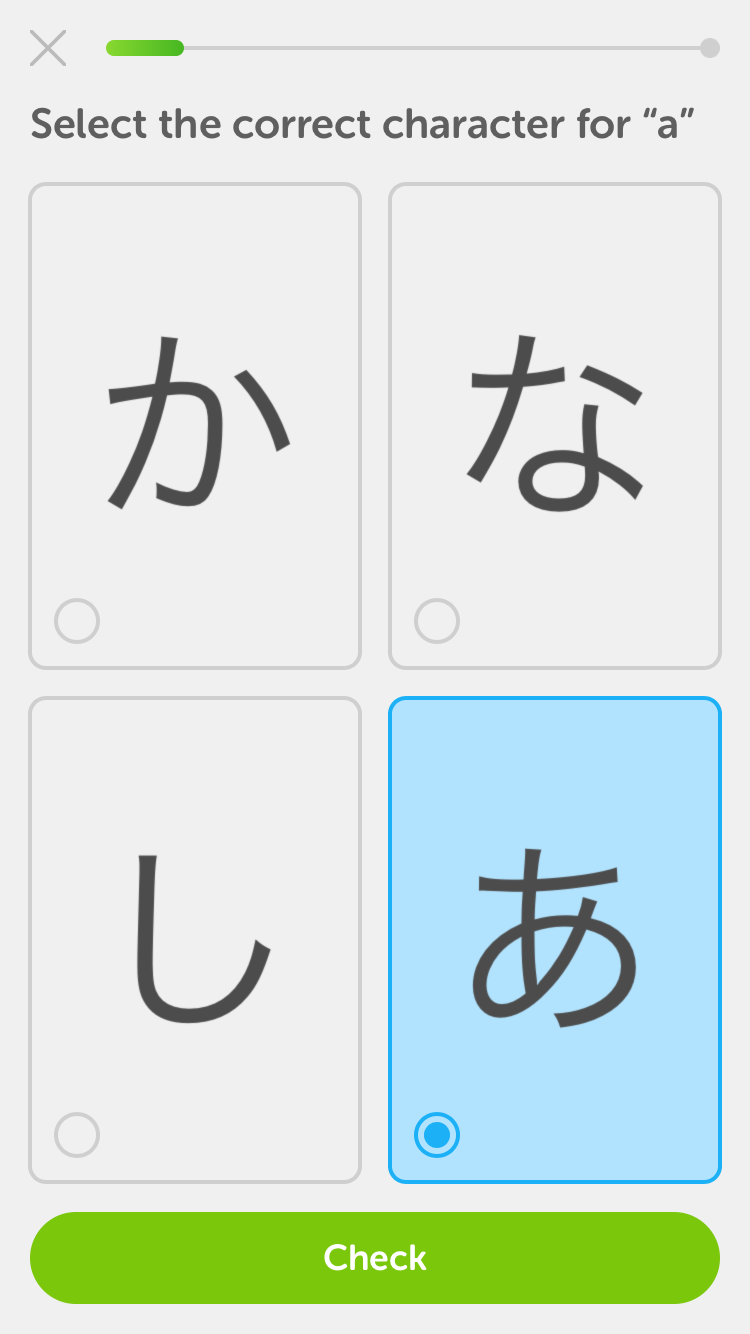 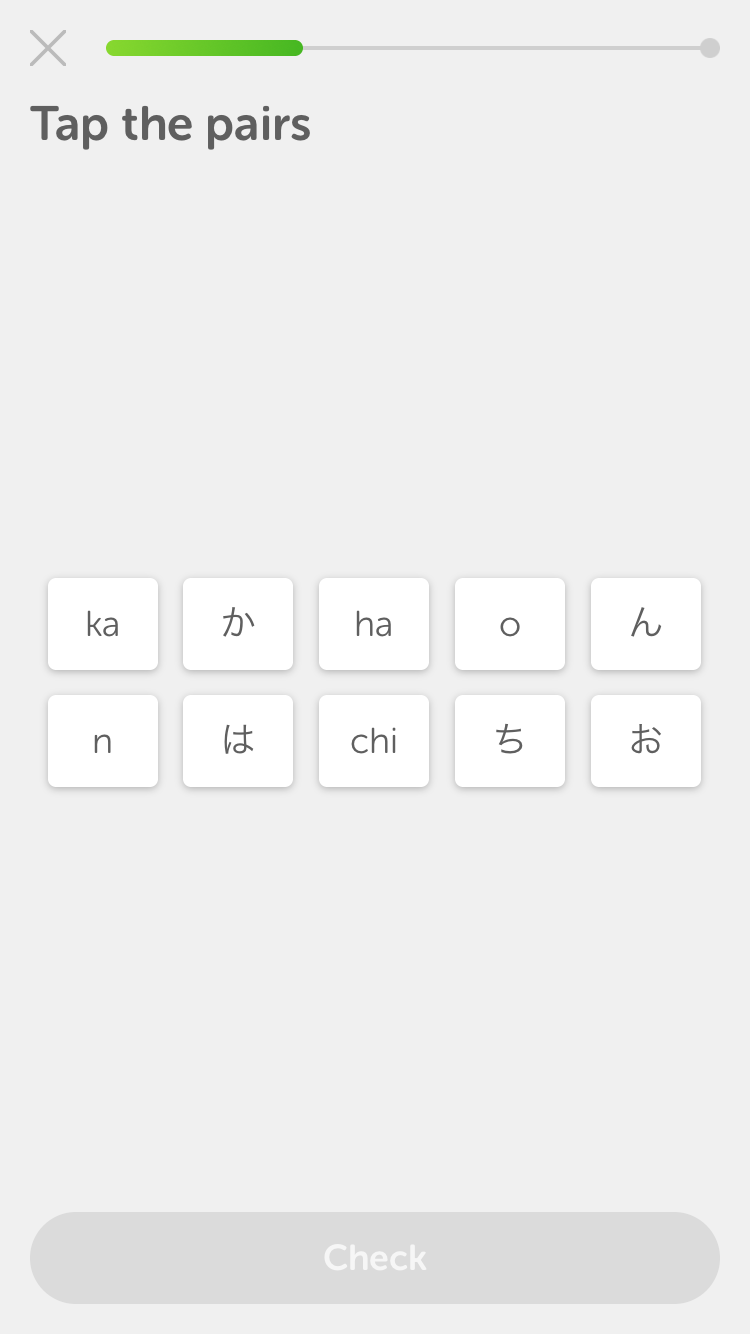 Unlike most other Japanese courses where all Hiragana/Katakana characters must be learned up front, Duolingo’s course teaches characters more gradually. While you still need to learn Hiragana because it encompasses the basic building blocks of Japanese, the lessons are arranged thematically (Numbers, Food, Animals) rather than the more typical alphabetical ordering. For example, the first three characters you learn in Duolingo’s course are い (i), ち (chi), and に (ni), with which you can say いち (ichi, or one) and に (ni, or two) right away. Katakana and Kanji characters are spread across multiple lessons so that you can learn them as needed throughout the entire course.

Our course is heavily backed by research

Since Japanese is so different from Western languages, we designed our curriculum from scratch based on research-based teaching guidelines.

Specifically, we used the JF Standard, which is a Japanese-language education framework based on the Common European Framework of Reference for Languages (CEFR), an international standard for describing language ability. This enabled us to make sure we cover 100% of the necessary topics, vocabulary, and grammatical concepts in the right order to bring learners to the CEFR A1 level upon completion of our course so that they have a basic understanding of the Japanese language.

Importantly, our course teaches all of the vocabulary and grammar needed to pass JLPT N5, the most popular Japanese language proficiency test in the world.

The course is thematic – and actually useful 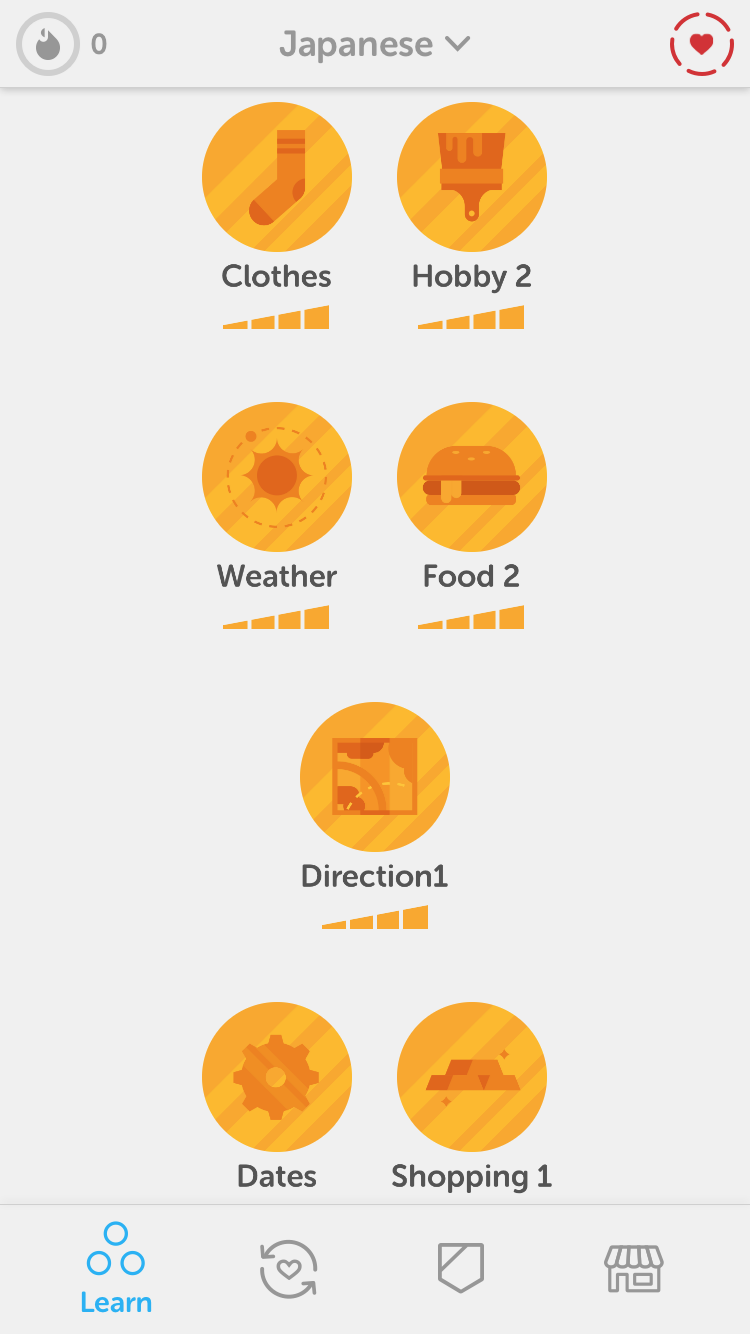 Ever thought remembering all of the “Present Tense Verbs” or “Prepositions” in school was boring? No worries! There are no such grammar intensive lessons on our Japanese course. All of our lessons are based on themes such as food, travel, and hobbies, and are made up of a practical mix of vocabulary and grammar. For example, instead of throwing a lot of present verbs at you all at once, our typical lesson teaches nouns (e.g., door), verbs (e.g., to open), and adverbs (e.g., slowly) so that you can form practical and natural sentences (“Open the door slowly”) as soon as you learn them.

This doesn’t mean we don’t teach any grammar. Rather, our course is designed to introduce new grammatical concepts gradually along with other vocabulary as you advance so that you never feel overwhelmed.

Olympics fans and anime lovers, rejoice – we’ve got you covered, too!

In addition to our standard lessons, we threw in a few bonus lessons at the end of the course to teach learners phrases relevant to the much-anticipated 2020 Tokyo Olympics and popular Japanese subculture like anime, manga, and Akihabara. Since many people who want to learn Japanese do so in order to better appreciate Japanese culture, we figured these bonus skills will come in handy.

Duolingo’s Japanese course has been a long time coming, and we couldn’t have developed this course without the help of our other contributors: Hideki (fellow software engineer at Duolingo), Ayako, Junko, Moeka, Sho, and Ryan. We hope you enjoy learning this beautifully intricate language just as much as we enjoyed building it!