If you’ve ever used Duolingo consistently, you probably know this feeling: It’s 11:59pm. You’re about to watch that final episode of Emily in Paris. Suddenly, it hits you: you haven’t extended your streak on Duolingo today.

It’s a simple mechanic: your streak counts the number of consecutive days you’ve completed a lesson on Duolingo. And yet the streak can be an incredibly powerful motivator: our data shows that learners who reach a streak of 7 are 2.4 times more likely to continue using Duolingo the next day than learners without a streak. We’ve seen much higher streaks, in the hundreds or thousands, being extended on days when our learners give birth or get married.

Fortunately, about a year ago, we made a pretty big change to the streak that’s made it easier to stay on a streak — a change that increased the number of learners on a 7+ day streak by over 40%. In this post, we’ll discuss that change, why we made it, and the impact it’s had a year later.

Given how motivating the streak can be, we spend a lot of time exploring how learners engage with the feature. When we dug into the data for learners who had used Duolingo two days in a row, we found an interesting pattern. We expected the majority of these learners to be on a streak, but this wasn’t always true! The actual numbers depended a lot on their daily goal. 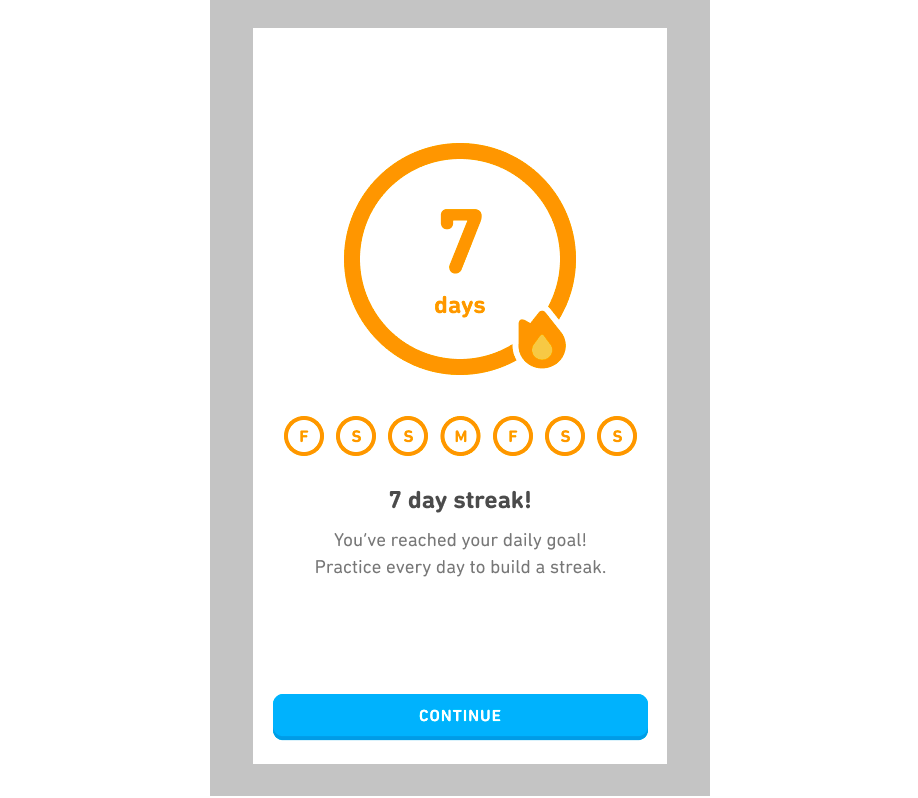 Previously, learners had to reach their daily goal to extend their streak

On Duolingo, everyone has a daily goal: a certain number of lessons to complete each day. As of a year ago, learners could only extend their streak when they reached this daily goal. But it turned out that learners with higher daily goals were less likely to be on a streak — even when they used the app every day.

In fact, learners with an “intense” daily goal — our highest tier — were the least likely to be on a streak: almost 40% of learners active two days in a row with no streak had the “intense” daily goal. Establishing a goal appeared to be a barrier to forming a daily habit, and that’s the last thing we want at Duolingo.

An easier way to keep your streak

Seeing how streaks were being impacted sparked an idea: what if we made it easier to stay on a streak? What if we fully separated the two mechanics, so learners could extend their streak by completing just a single lesson each day? 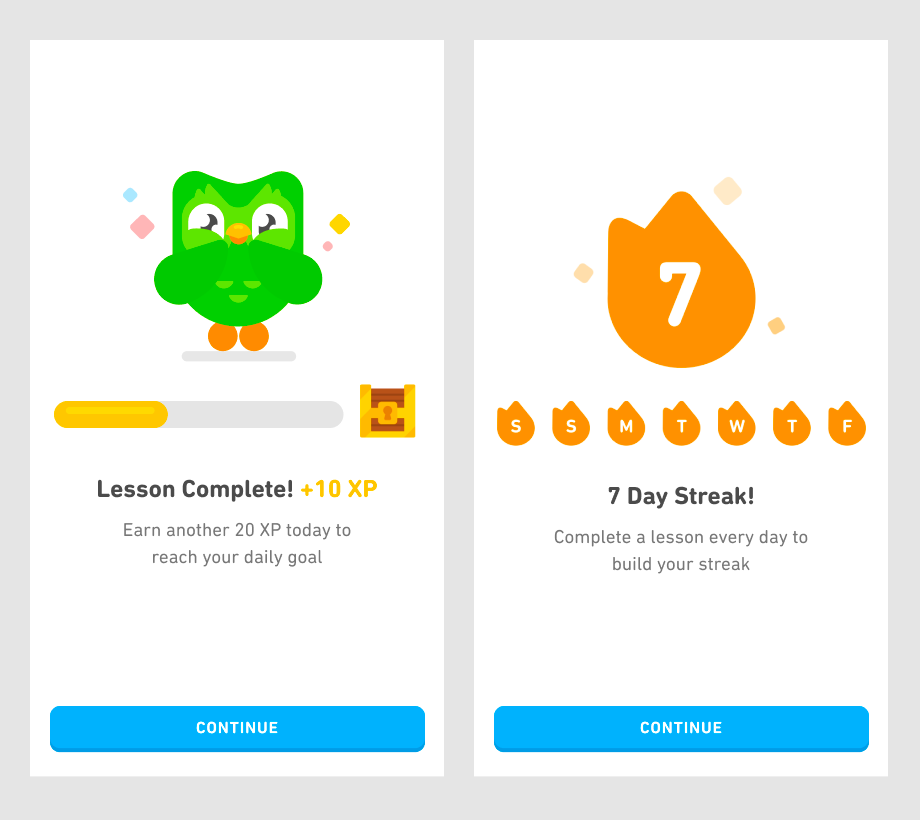 Under our new change, learners complete just one lesson to extend their streak, then see progress towards their daily goal separately.

We A/B test basically every change we make here at Duolingo, so to fundamentally change how one of our most important features works, we ran an experiment: A) separating daily goal and streak versus B) keeping them combined.

Fortunately, the experiment results looked really promising: separating the two mechanics led to a 3.3% increase in Day 14 retention (the percentage of learners still active 14 days later); a 1% increase in our overall daily active learners; and, in just 20 days, a 10.5% increase in the percentage of daily learners on a streak. (Note: all results are reported in terms of relative changes.) 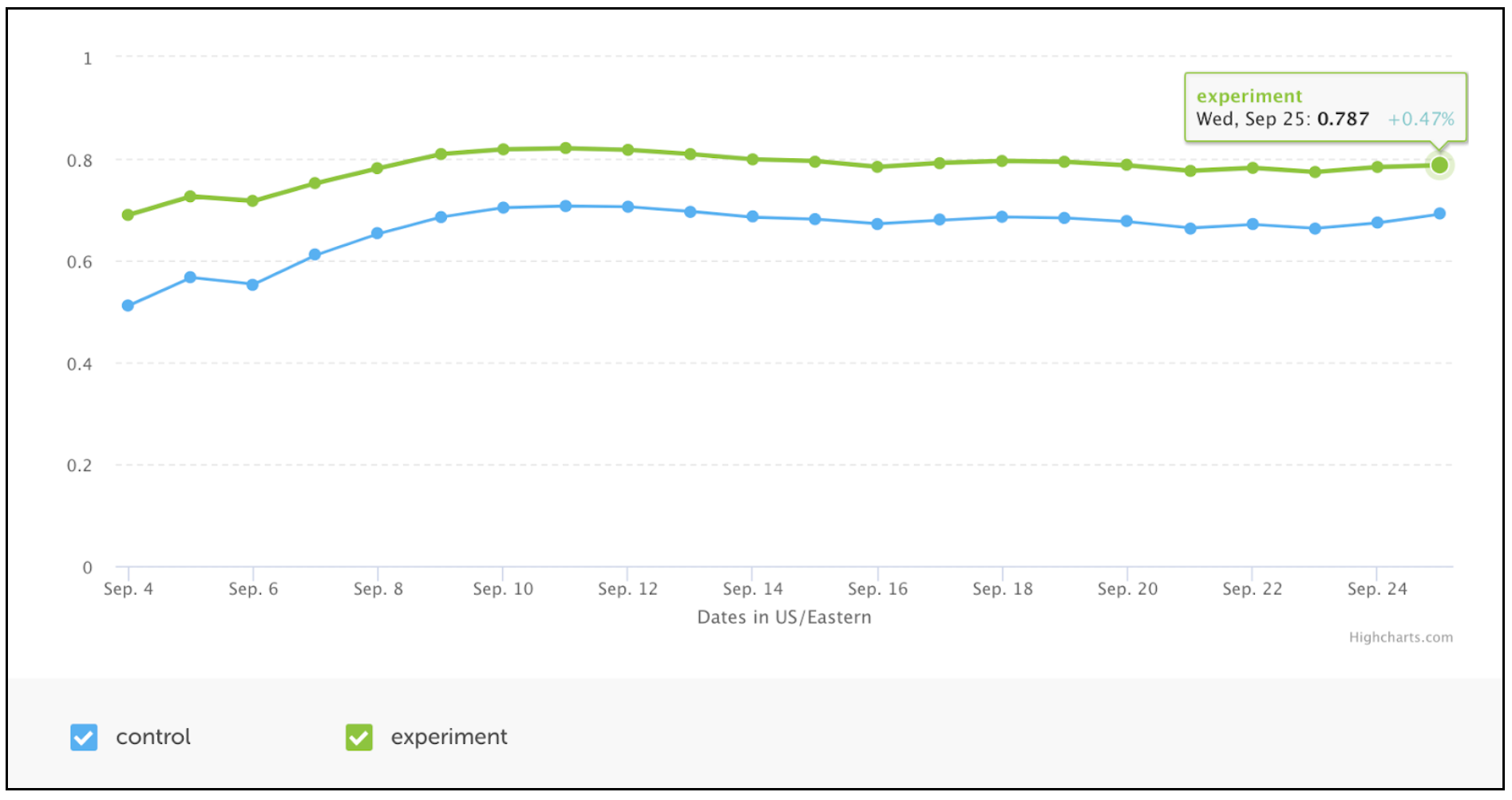 Looking just at new learners, the experiment increased the percentage of daily learners on a streak by 19%.

Not everything was positive — fewer learners were actually reaching their daily goals without the motivation of the streak — but overall, more learners were building daily habits and, as a result, spending more time learning in aggregate. In particular, we learned that lowering the barriers to building a consistent daily habit is more important to successfully learning a language than how much you learn each day, at least early on — because we can’t teach people if they stop using Duolingo.

A year later, those positive results look even starker. We’ve reached a point where just over half of our daily learners have a streak at least 7 days long, compared to about a third of our daily learners a year ago. In absolute terms, that means that millions more people than a year ago have been learning on Duolingo every day for at least a week!

But that doesn’t mean we’re done yet. If this one change can make such a strong impact, we’re certain there’s more we can experiment with to help our learners succeed, whether it’s improving the streak mechanic or adding other fun, effective new features. So stay tuned — and don’t forget to keep up your streak!