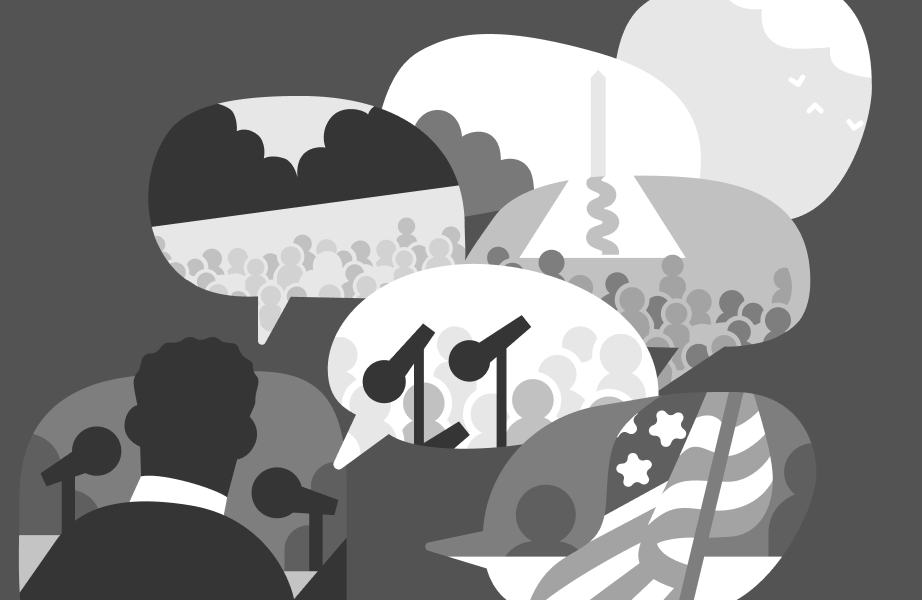 Dr. Martin Luther King, Jr. is one of the greatest speakers in history, but how much do you really know about him? And what exactly made his speeches so effective? In short, Dr. King was a master rhetorician who skillfully used aspects of African American Language and rhetoric to engage his audience. Despite his staunch belief in peaceful, non-violent protest, Dr. King was a political radical whose life was eventually taken by those who opposed his call for interracial unity to achieve economic justice. Dr. King’s fixation with upholding human dignity and honoring the labor of each person is directly related to his role as a theologian and pastor in the Christian Baptist church; however, we can also trace this message–and the distinct rhetorical style that he uses to deliver his message–to African American culture.

The African American rhetorical tradition upholds human dignity across difference, as it's born of the racial subjugation in the United States that led to segregated, yet economically and socially diverse, Black communities. In these communities, preachers were teachers, charged with meeting the needs of a wide range of learners. They needed the ability to “make it plain” for all to understand, and Black preachers regularly applied a range of linguistic resources to accomplish this goal. Specifically, “call and response,” discussed in more detail below, provided a constant feedback loop from the audience to the speaker. A preacher that used different language tactics to meet the diverse needs of their audience was successful, and as a public figure, Dr. Martin Luther King, Jr. was able to apply his skills honed in the Black church to engage a multiracial, international audience.

As in any language, there are some linguistic patterns in African American Language that may be found in other languages. But one linguistic pattern or feature does not define an entire language. Rather, the particular combination of features, frequency of their use, and specific contexts of usage are what characterize a language. When discussing the African American rhetorical preaching tradition, you’ll find numerous strategies to persuade an audience, but three of the most prevalent that Dr. King uses are repetition, antiphony, and the Jeremiad sermon structure.

The power of Dr. King’s speeches

Dr. King’s 1963 “I Have a Dream Speech” delivered at the March on Washington is widely quoted, yet his speeches delivered after the March are less well-known. In these addresses, Dr. King explicitly made connections between poverty and racism, advocating for economic liberation and dignity of all groups in the United States. On July 4th, 1965, Dr. King delivered a sermon at Ebenezer Baptist Church in Atlanta, Georgia entitled “The American Dream.” He uses the extended metaphor of the dream to assert his dissatisfaction with continued racial and class oppression after the March and after the 1964 presidential election. During the climax of the sermon, when describing the need to treat each person with dignity, as they are all created in the image of God, Dr. King proclaims the urgency of uniting with the labor movement for economic justice. Can you spot the use of antiphony, or call-and-response, here?

This is why we must join the war against poverty (Yes, sir) and believe in the dignity of all work. What makes a job menial? I’m tired of this stuff about menial labor. What makes it menial is that we don’t pay folk anything. (Yes, sir) Give somebody a job and pay them some money so they can live and educate their children and buy a home and have the basic necessities of life. And no matter what the job is, it takes on dignity.

Later in the speech, Dr. King confesses that his famous dream had been shattered several times. Look for the places where he employs repetition and parallelism to make his point:

I’ve seen my dream shattered as I’ve walked the streets of Chicago (Make it plain) and seen Negroes, young men and women, with a sense of utter hopelessness because they can’t find any jobs. And they see life as a long and desolate corridor with no exit signs. And not only Negroes at this point. I’ve seen my dream shattered because I’ve been through Appalachia, and I’ve seen my white brothers along with Negroes living in poverty. (Yeah) And I’m concerned about white poverty as much as I’m concerned about Negro poverty. (Make it plain)

So yes, the dream has been shattered, (Amen) and I have had my nightmarish experiences, but I tell you this morning once more that I haven’t lost the faith. (No, sir) I still have a dream (A dream, Yes, sir) that one day all of God’s children will have food and clothing and material well-being for their bodies, culture and education for their minds, and freedom for their spirits. (Yes)

As a seasoned Baptist preacher, Dr. King is a master rhetorician, and we see the African American preaching tradition of repetition, antiphony, and Jeremiad in these excerpts. He primarily uses a pathetic appeal, meaning he speaks to the emotions and values of the congregation, and they engage in call and response with him throughout to affirm their engagement (“Amen!,” “Make it plain”). His audience provides affirmative feedback by talking back to the speaker, giving frequent assessments of his effectiveness.

The extended metaphor of the shattered dream across the United States, and across racial lines, helps to cement his message of everyone in the country having a common fate. The repeated lines “I’ve seen my dream shattered” create parallelism, a unity in structure that emphasizes the message of unity in the speech’s content. The repetition of three is a specific rhetorical device that evokes the Christian concept of the Holy Trinity–Father, Son, and Holy Spirit. In the last sentence of the excerpt, Dr. King illustrates this technique twice: (food, clothing, and material well-being) and (bodies, minds, and spirits). Overall, the speech follows the rhetorical structure of a Jeremiad, a litany of injustices followed by a hopeful claim (“I still have a dream”).

A legacy of liberation

As we celebrate Dr. King’s birthday and his life of service, let us resist attempts to quench the fire in his words, stemming from the inclusive mission of the African American rhetorical tradition. We cannot forget his radical vision for economic justice across racial lines, a vision that is valiantly upheld by labor unions and activists today. Let us not forget that liberation comes at a cost, that the 8 hour work day and minimum wage were hard won feats, and there remain “many rivers to cross” to ensure that every wage is a living wage. In this period of global pandemics, enormous loss of life, political upheaval, and continued struggles against racism and other forms of human indignities, let us remember Dr. King the preacher-scholar-activist and his timeless call to action:

Live. Believe. Act. This is Dr. King’s legacy and enduring message for today.

“Freedom’s Ring,” an animated version of Dr. King’s “I Have a Dream” Speech.

Dr. Kahdeidra Monét Martin holds a Bachelor’s degree in African & African American Studies with a minor in Linguistics from Stanford University. She received her Ph.D. in Urban Education from the Graduate Center of the City University of New York and researches African American Language, literacy, inclusive teaching, and belonging in schools. In 2020, she co-authored a book, Classroom Talk for Social Change: Critical Conversations in English Language Arts, which received a 2021 Divergent Book Award for Excellence in 21st Century Literacies Research. Currently, Dr. Martin works at two of her alma maters, serving as a Lecturer of Writing and Rhetoric at Stanford and a Scholar in Residence at The Chapin School.