Today, Duolingo officially launched its Chinese course for English speakers, now available on iOS, Android, and web. Along with Japanese, Chinese has been one of the most requested language courses in Duolingo’s five-year history. This is not surprising, as more than one billion people worldwide speak the language. This launch is an important milestone not only for us but for the millions of people worldwide who will be able to learn the language in a free, fun, and effective way!

The challenge of learning Chinese 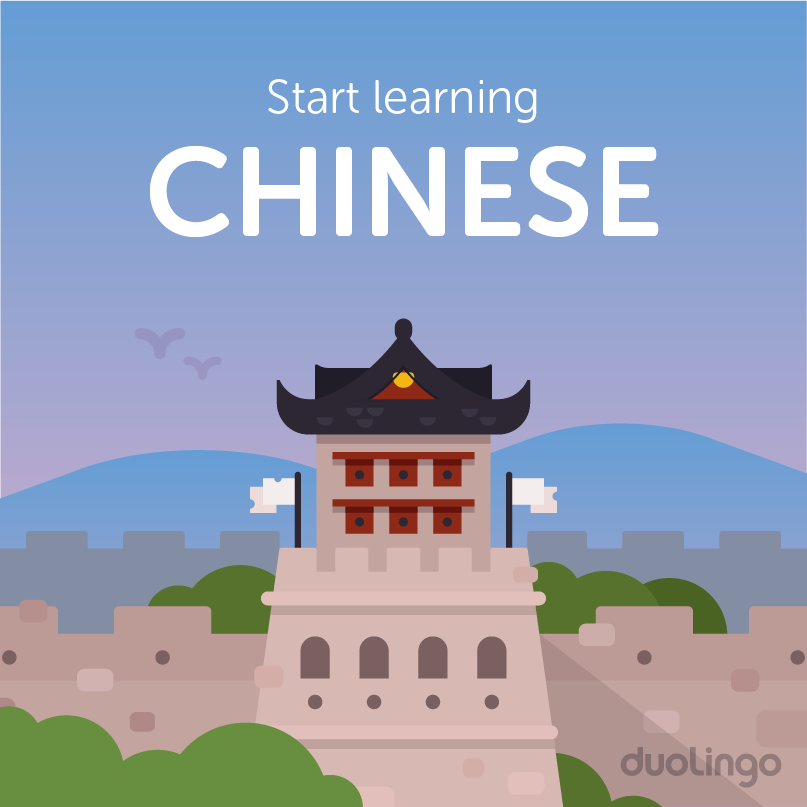 According to the Foreign Service Institute, Chinese is classified as one of the most difficult languages for native English speakers to learn. To achieve proficiency, they estimate that it requires 88 weeks (or 2,200 hours) of in-class study – of which the entire second year is spent in China with immersion in the language.

Don’t let this scare you, though: you can learn the basics (and more) of the language on Duolingo without spending thousands of hours in a classroom or years in China. In this post, I cover how we developed the course, and the features that make it unique and effective.

What we teach and how we teach it

Our course teaches Modern Standard Mandarin (known as 普通话 - Putonghua in Chinese). Mandarin Chinese is the official language of the People’s Republic of China (China) and the Republic of China (Taiwan). It’s also one of the official languages of Singapore and Myanmar, and spoken by a large population of Chinese people and their descendants in countries from Malaysia to the US.

Since more than one billion people worldwide speak Chinese natively or as their second language, this means that if you picked one random person on earth, chances are that almost 1 out of 7 would understand Chinese. No other languages are spoken as widely as Chinese.

Given that it’s so widely spoken, we wanted to ensure that we developed a course that teaches the language as effectively as possible, especially to those who are beginners. Here’s how we did it:

Exercises on the four tones 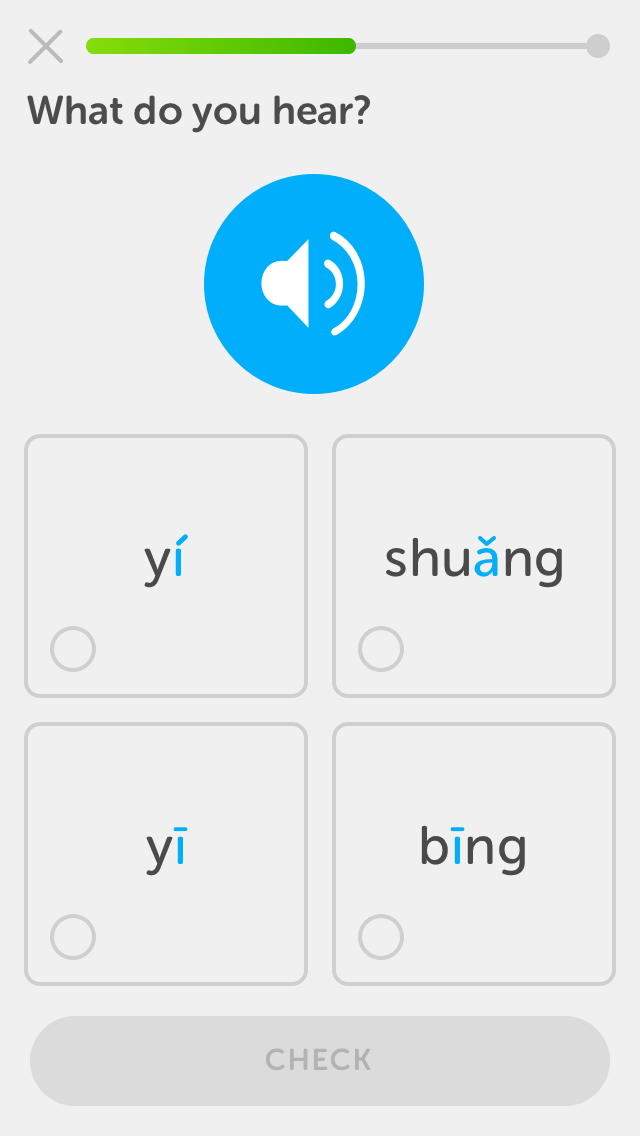 Chinese is a tonal language, meaning it uses pitch changes to distinguish different meanings of words. There are four main tones in Chinese.

To illustrate how tones can make all the difference, take shi: with a high, flat tone, shi means “lion”; shi with a rising tone is “stone”; shi with a low tone is “history”; and shi with a falling tone is “to be” – all vastly different meanings. In fact, there are so many words with the same sequence of sounds but different tones in Chinese that you can write an entire poem about a poet who tried to eat stone lions only using a single syllable – shi – with different tones!

Since tones play such an important role in Chinese, it is essential to master them if you want to communicate effectively. That’s why Duolingo developed a completely new type of exercise dedicated to this. You will see these tone exercises early on in order to get used to the concept of tones themselves, and the course will gradually teach you how to distinguish difficult sound differences.

Characters are the cornerstone of the Chinese writing system, and it’s the world’s oldest writing system that has continuously been in use until today. Unlike the English alphabet, Chinese characters are logograms, meaning they represent meanings and not just sounds. This means that you need to learn to recognize hundreds, if not thousands, of characters in order to become functional in written Chinese. This is certainly one of the factors that makes learning Chinese so difficult.

Our Chinese course teaches you how to recognize and pronounce nearly 1,000 important and common Chinese characters. We made the most of our newly developed character exercises – also used to teach the writing systems in our Japanese and Korean courses – for this purpose. In addition to learning nearly 1,000 characters throughout the course, you will learn Hanyu Pinyin, the standard romanization system for Mandarin Chinese, along the way. 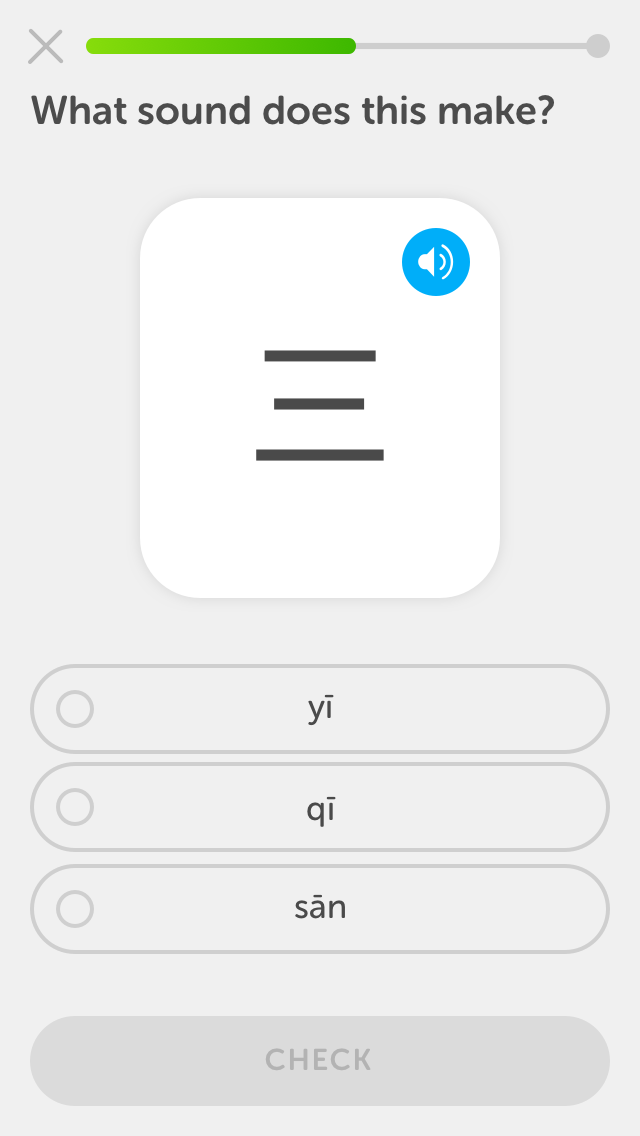 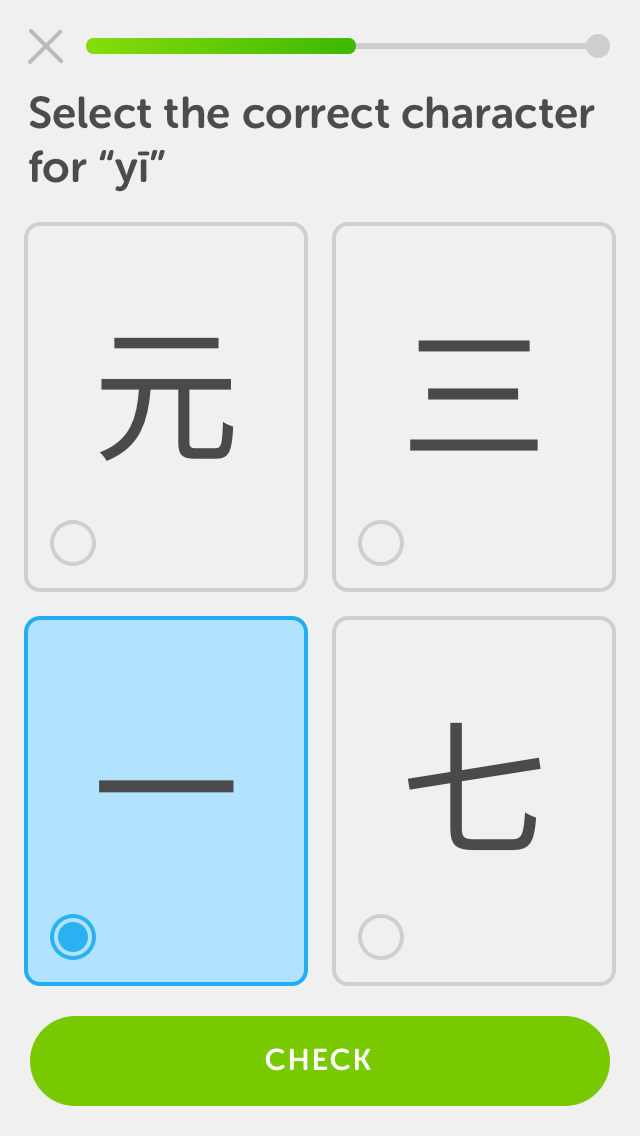 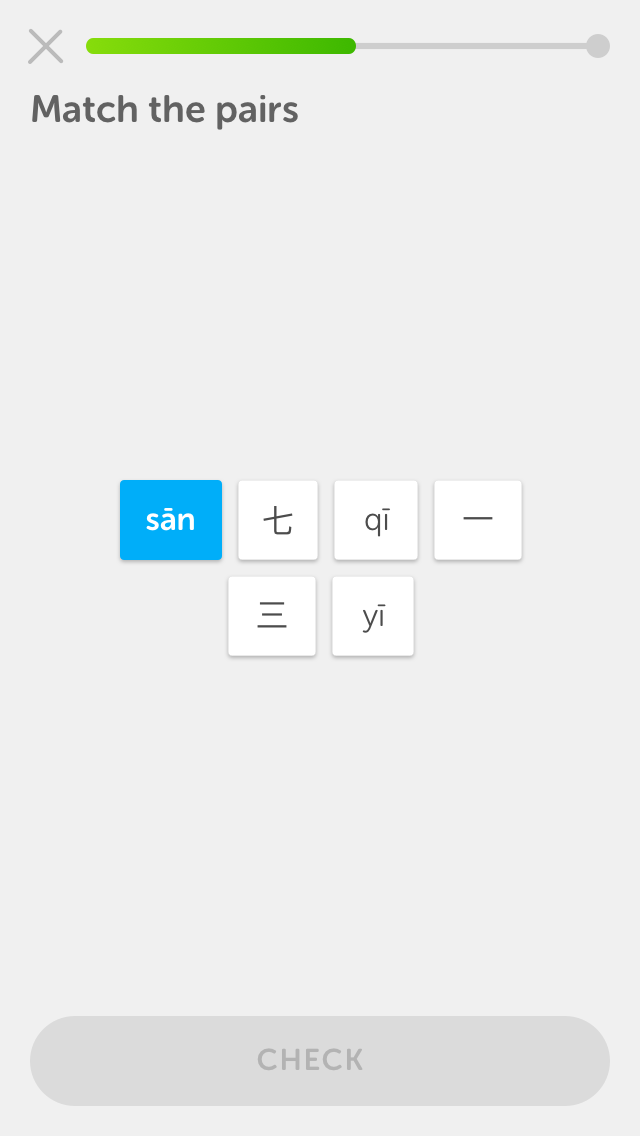 Our Chinese course teaches more than 1,000 words and nearly 1,000 characters, covering all vocabulary and grammar points necessary to pass levels 1 through 3 of the HSK (the official Chinese proficiency test), as well as almost half of the content of level 4. This is enough to bring you up to an upper beginner level, and roughly corresponds to the A2 level of the Common European Framework of Reference for Languages (CEFR), an international standard for describing language ability.

The course is also heavily backed by research: our curriculum is based on the European Benchmarking Chinese Language (EBCL) Project, a standard framework based on CEFR that defines topics, themes, and can-do statements for each of the proficiency level goals for Chinese learners. Upon completion of the course, you will be able to introduce yourself, discuss topics related to your daily life (work and school, family, weather, feelings, etc.), get by while traveling in Chinese-speaking countries, order at a restaurant, haggle for a cheaper price while shopping, and much more. 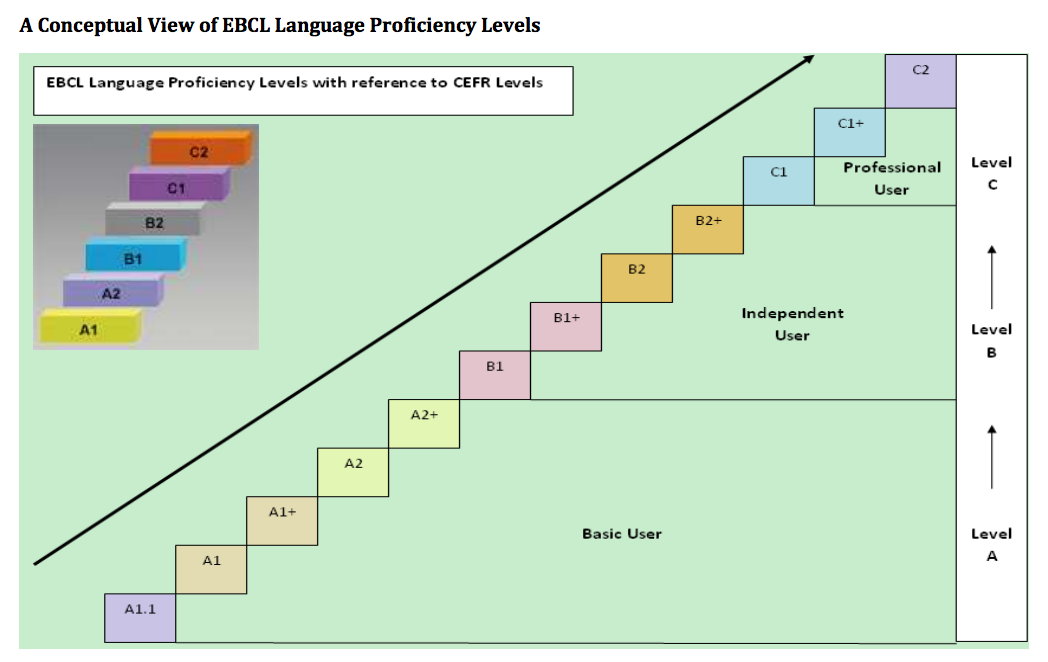 All of the lessons in this course are based on themes such as food and travel, rather than grammatical concepts like “verb complements” or “past participle.” You’ll learn a practical mix of vocabulary and grammar as you complete these thematic lessons.

Thematic lessons (and a few bonuses!) 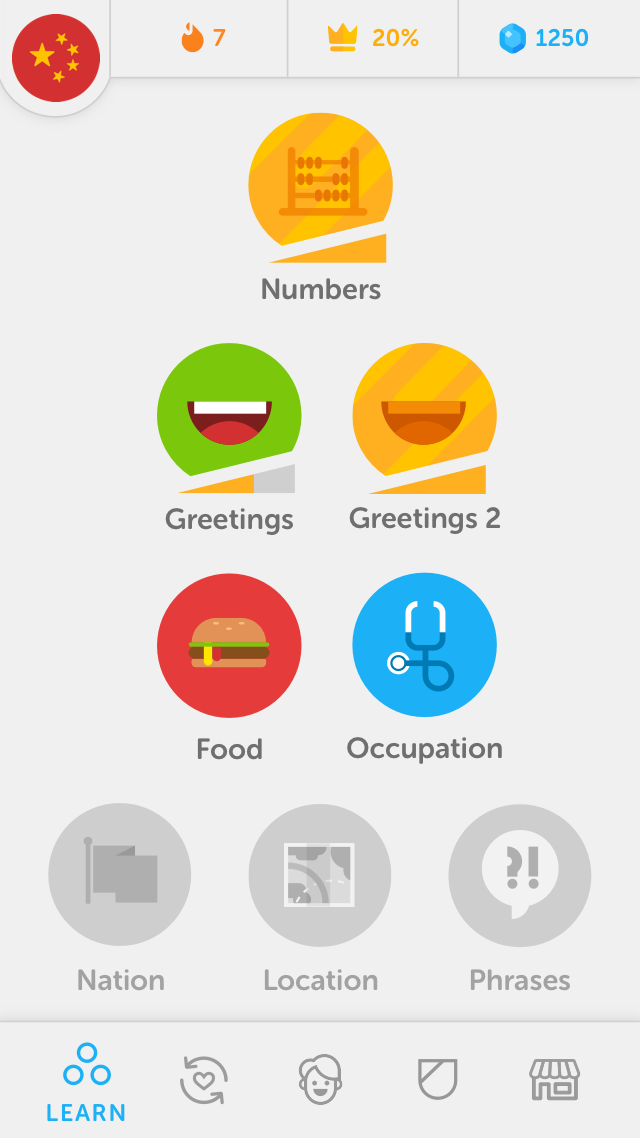 Along with everything mentioned above, our team of language experts carefully reviewed and made improvements to publicly available Chinese word and grammar lists (such as the ones from HSK). As a result, we added a significant amount of new content that reflects the modern use of the language in Chinese-speaking countries today.

The lessons throughout the course are structured thematically by topics such as greetings, occupation, health, sports, and more. Additionally, our course offers lessons on a few “bonus” topics, including:

Whether you’re learning Chinese for pleasure, as a challenge, or for educational or professional purposes, this course will help you master all aspects of the language in a way that’s both effective and fun.

We hope you enjoy taking the course as much as we enjoyed creating it!