Our analysis last year of language-learning patterns around the world yielded some interesting findings. For example, did you know that Swedish is the top language studied on Duolingo in… Sweden? (While initially puzzling, it turns out that the strong influx of immigration to Sweden in recent years is the likely reason for this.)

Given the popularity and interest in our global analysis, we wanted to do something similar for our home country. Duolingo is very international, but the United States is actually our largest country, and home to 57.8 million users. In fact, Duolingo is by far the most popular way to learn languages in the US: there are more people learning languages on Duolingo in the US than there are people learning foreign languages in the entire US public school system.

Even though the US is technically one country, we take interstate and regional language differences pretty seriously. For instance, are you adamant that it’s “pop”, not “soda”? And does your New Yorker friend make fun of your Texan friend for saying “y’all” rather than “you guys”?

Our differences aren’t just limited to minor preoccupations about regional language patterns. In analyzing the language-learning habits of our users in the US, we found interesting variations on states’ and regions’ foreign language preferences, how dedicated users in different states are to making language learning a daily habit, and more.

Before we get into the results, let’s see if you can guess the following. Read on for the answers. (Number 4 will shock you!)

Which states have the highest (and lowest) proportion of language learners?

We were intrigued to find that out of all 50 states, Utah came out on top with the highest proportion of people who started learning languages with Duolingo in the past year. To calculate the proportion, we divided the number of users who registered on Duolingo in the past year in each state by the current population of each state, and got a percentage of 6.78% in Utah – the highest out of every state (see Figure 1).

But why Utah? One hypothesis is that as the state where the Church of Jesus Christ of Latter-day Saints is headquartered, Utah has a high number of people learning languages as they prepare to take international mission trips. 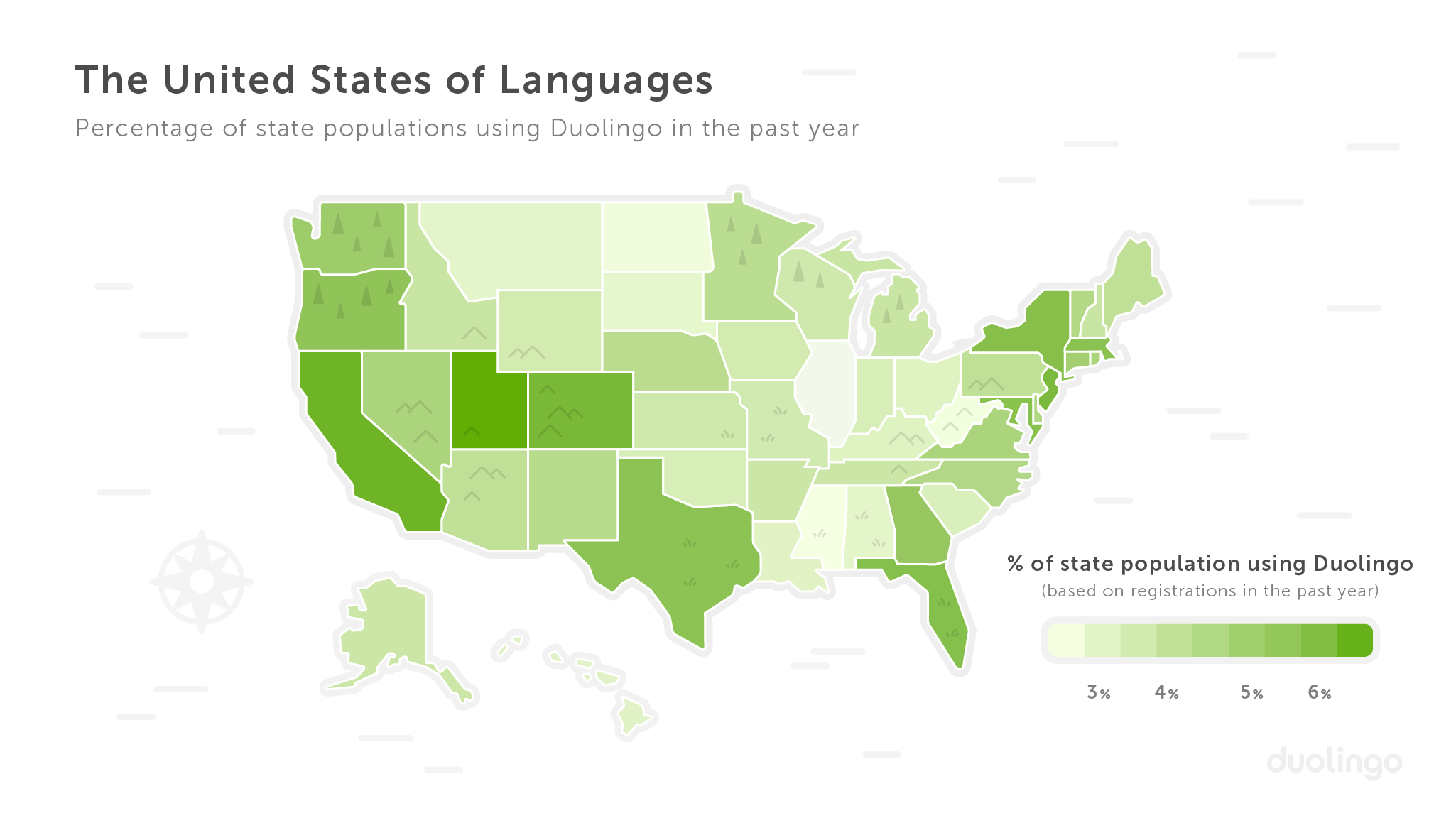 Now, what about the states with the lowest proportion of language learners? Mississippi came out on the very bottom, with a proportion of just 2.17%. Interestingly, Mississippi also ranks last in terms of States’ access to the Internet. In fact, the correlation coefficient between Internet access and language learners on Duolingo is 0.64, which is quite high. This suggests that a state’s Internet infrastructure plays a significant role in the use of Duolingo by people who live there, which is not surprising.

Which languages are the most popular in each region? 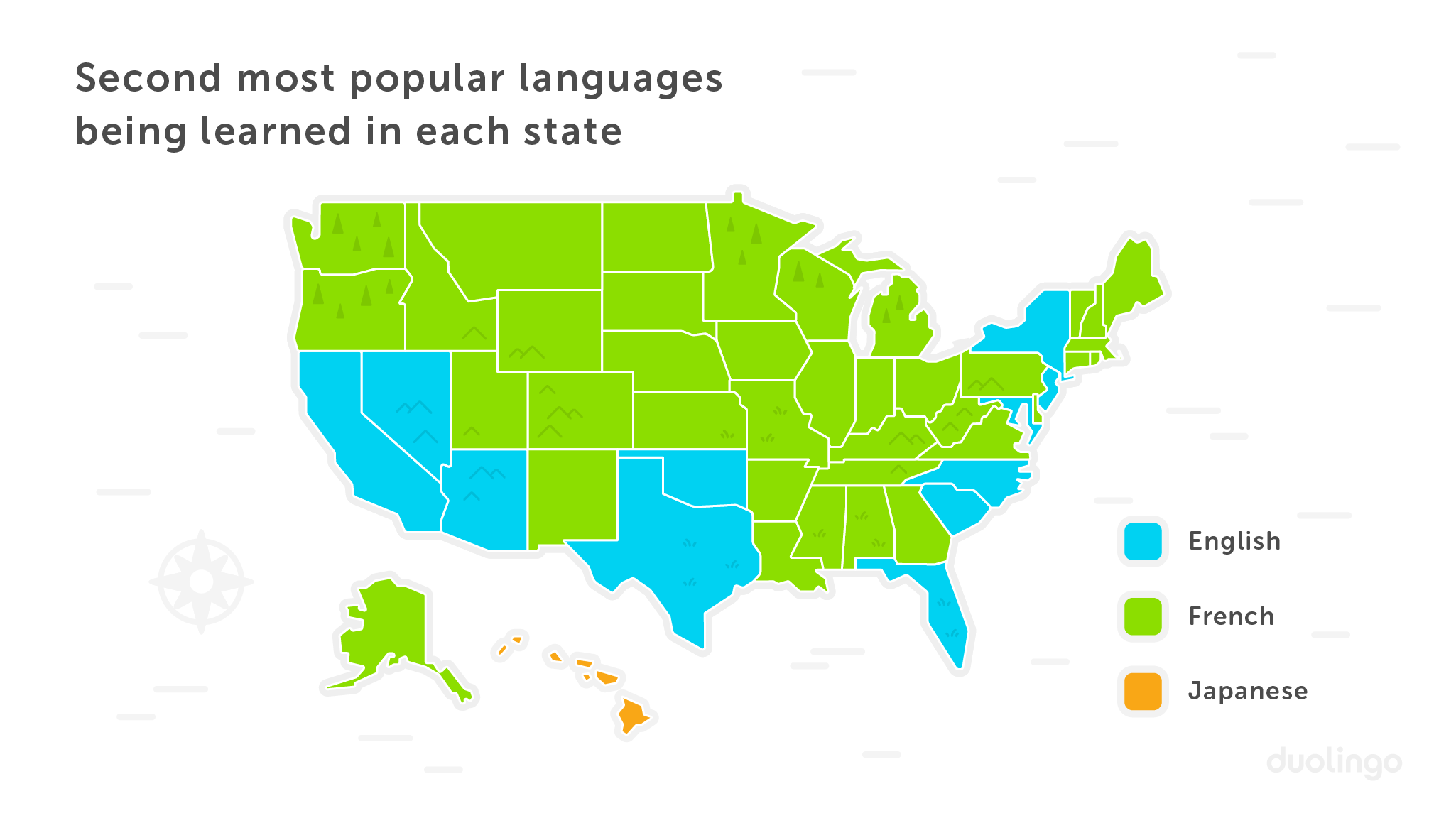 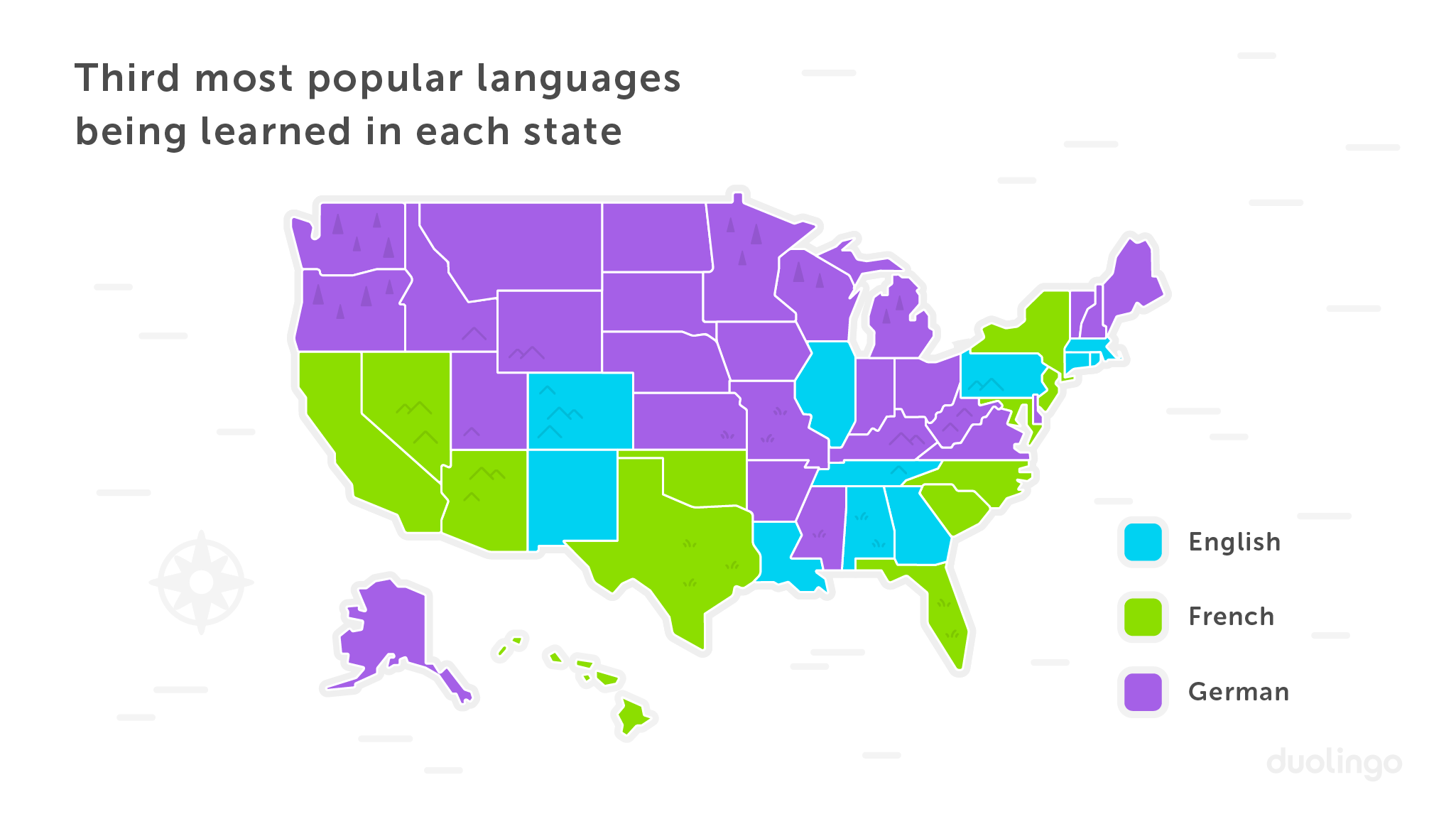 When it comes to regional language-learning trends, our analysis showed some clear patterns:

Which states have the most (and least) dedicated language learners?

One of the primary features Duolingo offers is the ability to maintain a streak. The concept is simple: if you meet your daily goal on Duolingo for 2 days in a row, you have a 2-day streak. Miss a day? It goes back down to 0. The idea of keeping a streak is incredibly motivating for users, and we set out to identify in which states users are the most diligent about maintaining their streaks.

To find the data, we looked at the average proportion of daily active users over the past year in each state that have a streak in ranges that are short (3-29 days), medium (30-119 days), and long (120 or more days) (see Figure 4).

Conversely, some of the states that have the highest number of language learners – including Florida, New Jersey, and Texas – aren’t so great at making language-learning a daily habit. Florida came out on the very bottom for the average proportion of users with streaks of both 30-119 days and 120 or more days, and New Jersey came out on the bottom for streaks of 3-29 days.

Just like the neverending soda vs. pop debate, the preferences for which languages we learn (and how dedicated we are to learning them) can say a lot about regional and interstate differences in the US. Are you living in the US and learning a language? If so, we’d love to hear about whether any of our findings apply to you!