In most parts of the United States, life in 2020 largely seemed normal up until mid-March – when the World Health Organization declared COVID-19 a global pandemic and stay-at-home guidelines were issued. As schools, offices, and businesses across the country began shutting down and/or going virtual, people all over the US suddenly found themselves with ample time to take up new skills and hobbies. Along with baking sourdough, playing Animal Crossing, and binging “Tiger King” on Netflix, many have used the time to pick up a new language.

Between March 11 (the date WHO officially declared COVID-19 a pandemic) through the end of April 2020, we saw 51% growth in new learners on Duolingo in the US compared to the same period in 2019. 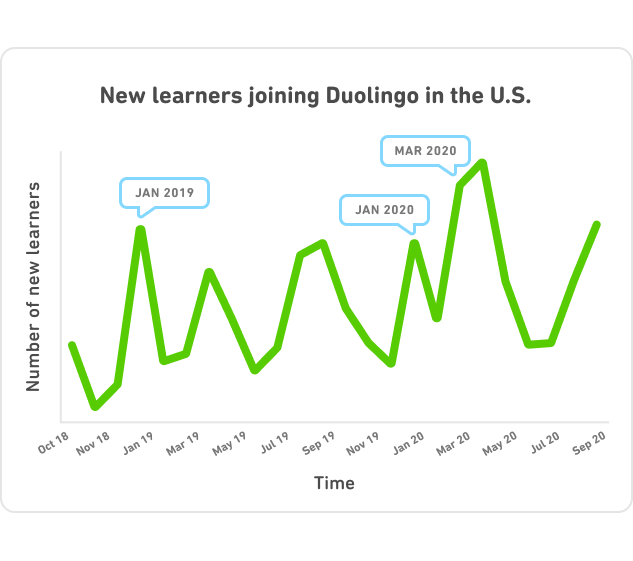 As part of our 2020 Duolingo Language Report, this post covers a few of the most significant language-learning trends we have seen in the US throughout all of 2020, including: 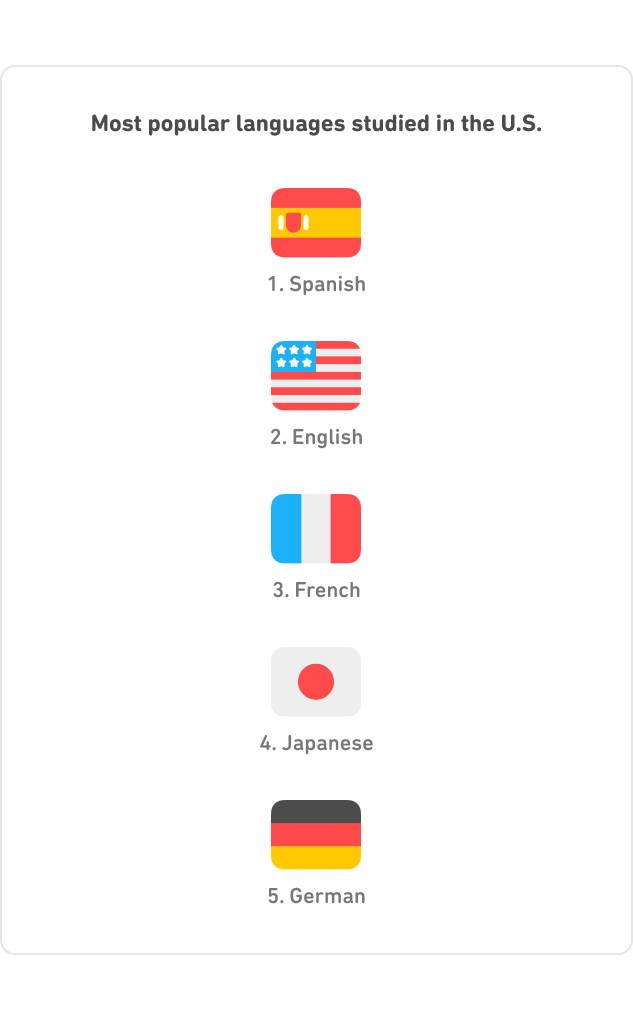 English being #2 in the US differentiates it from other English-speaking countries where the portion of English learners ranks lower. For example, in Canada, English is the third most studied language, in the UK it’s fourth, and in Australia it doesn’t even rank in the top five. We believe the high ranking of English learners in the US is reflective of the US being home to more immigrants than any other country in the world; according to the Pew Research Center,in 2018, the US foreign-born population grew to a record of 44.8 million, and today immigrants account for 13.7% of the US population. This tells us that not only does the US have an enormous immigrant population, but also that immigrants in the US are actively learning English in order to better acclimate and fulfill both personal and professional goals.
Looking at our US state-level data, we noticed similar patterns related to immigration. In California, Texas, Florida, New York, New Jersey, Nevada, North Carolina, and Washington, D.C., English is the second most studied language on Duolingo. This isn’t surprising, given that 45% of immigrants in the US live in California, Texas, and Florida.

Among most other states, French is the second most popular language learned in the US, with the exception of Hawaii, where Hawaiian is #2. When we conducted a similar state-by-state analysis in 2017, Japanese came out as #2 in Hawaii (we launched our Hawaiian course in 2018). 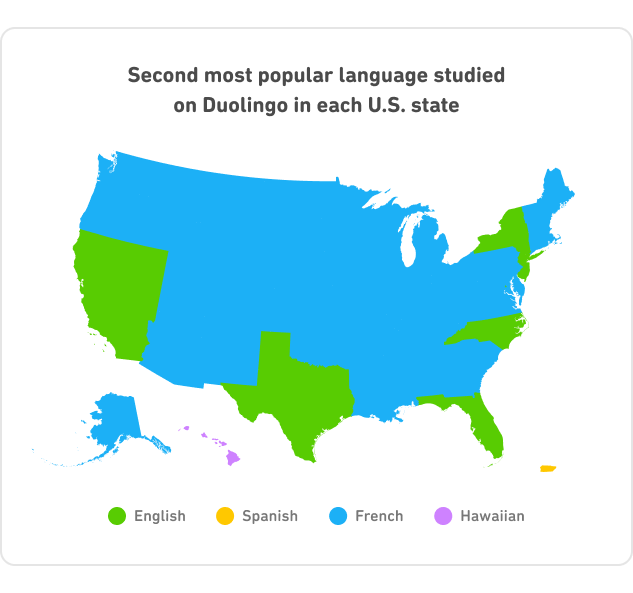 Our state-level data get even more interesting when looking at the third most popular language studied on Duolingo: 19 states have German as #3, 18 states have English (up from 11 in 2017), 8 have French, and 6 have Japanese (Arkansas, Kentucky, Mississippi, New Mexico, Wyoming, and Hawaii).

We believe that the popularity of Japanese – among our fastest-growing languages – relates in part to the rise of Japanese culture in the US through popular video games, manga, and anime (interestingly, Netflix saw a 50% year-over-year increase in viewers watching anime titles on their platform). As we have seen with many Korean learners being motivated by their interest in K-pop and Korean dramas, the pop culture commonly associated with certain countries can be a significant driver for picking up a new language. 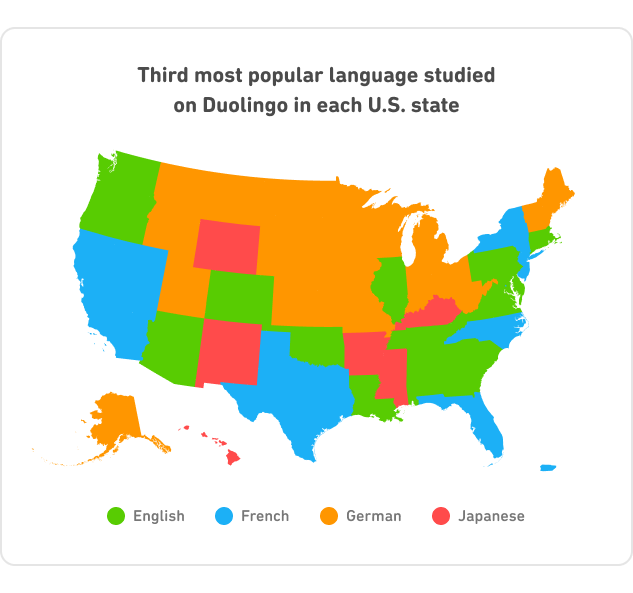 In addition to looking at the most commonly studied languages in the US, we also analyzed the fastest-growing languages US-based learners have been studying on Duolingo this past year: Turkish (39% growth since 2019), Japanese (36% growth), English (35% growth), Hindi (26% growth), and Korean (20% growth). 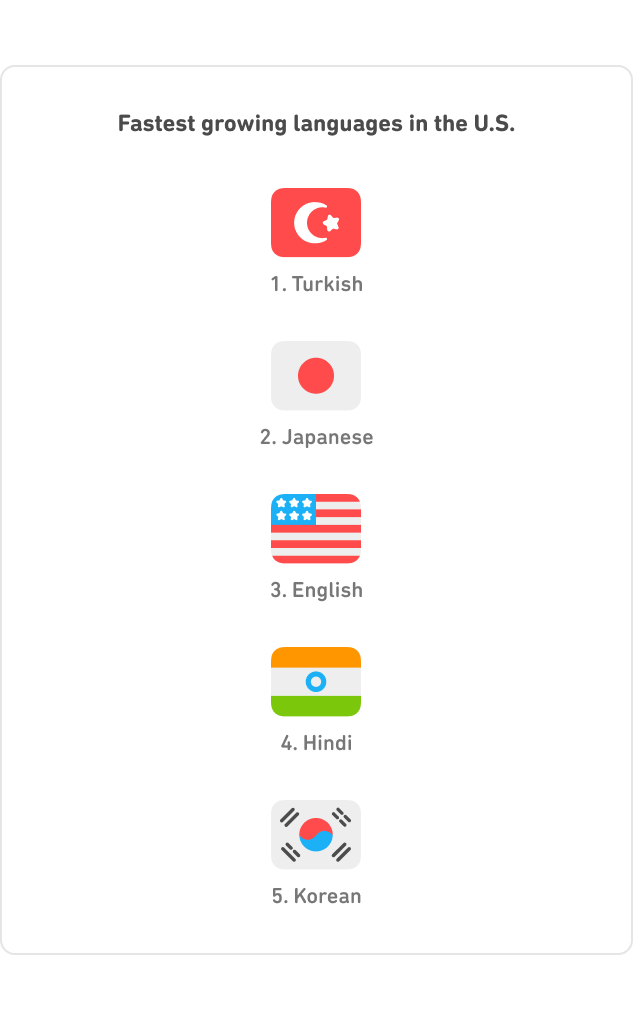 The prominence and diversity of Asian languages on this list reveals an interesting trend that speaks to potentially different motivations for learning these languages. With US-Turkish relations having faced volatility in recent years, it was interesting to see Turkish as the #1 fastest-growing language being studied among US learners on Duolingo. (Fun fact: singer-songwriter Halsey is one of them!) When analyzing US learners’ motivations for studying Turkish, it ranked second in terms of the proportion of learners studying for travel-related reasons (right behind Italian) and 15.2% of US learners also indicated that they were learning Turkish for family-related reasons.

For other fast-growing languages like Japanese and Korean, we believe that interest in pop culture and fandoms associated with Japan and Korea (such as anime, manga, K-pop, and Korean dramas) helps to pique interest in learning these languages.

In addition to new patterns in languages being learned in the US, we have seen some significant shifts in learner motivations as well, which we believe directly correlate to the ongoing COVID-19 pandemic.

Most notably this spring, we have seen a 7% increase in people in the US learning for school purposes compared to spring 2019. This makes sense, given that most schools in the US transitioned to virtual learning starting in March, and in this new environment, teachers and students have been using Duolingo even more than before as a supplement to their foreign language curricula. We saw significant evidence of this on our Duolingo for Schools platform: on March 18 – as many US schools had just begun closing – new teacher signups increased 600% year-over-year, 480% month-over-month, and 425% week-over-week. This included both teachers assigning remote work and parents who were then having to homeschool their kids.

The rise of school as a learning motivation also correlates with another trend we noticed this year: our US learners actually got slightly younger! In 2019, the median age of US learners was 23 years old, and this year, it’s 22.

Travel, on the other hand, decreased by 6.5% as a learning motivation this spring – and understandably so, as the pandemic has caused significant disruptions to both domestic and foreign travel. We also saw decreases in those learning for cultural purposes (-3.6%) and brain training (-2.3%) this spring compared to last spring. 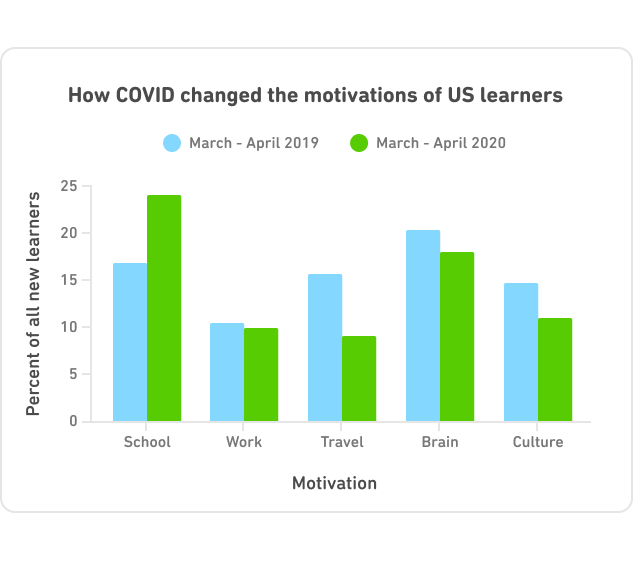 So, our US learners have studied more English as well as Asian languages, learned languages for school, and have gotten slightly younger. But how do they measure up in terms of the work they put into their language practice?

Well… not so great, it turns out. In our ranking of countries with the hardest-working learners (based on the average number of lessons completed), the US came in 68th place! And in the ranking for most dedicated learners (those who have maintained the longest Streaks and have committed to daily use of Duolingo), the US came in 37th. Could we have been just a little too invested in feeding our sourdough starters and visiting our friends’ Animal Crossing islands?

Despite the overall ranking when compared with other countries, the US isn’t a totally lost cause when it comes to hard work and dedication to language study. We also looked at state-level data to determine which US states come out on top (and bottom). We bucketed learners into two groups: hardest working (highest number of lessons completed) and most dedicated (longest Streaks and most consistent use of Duolingo). 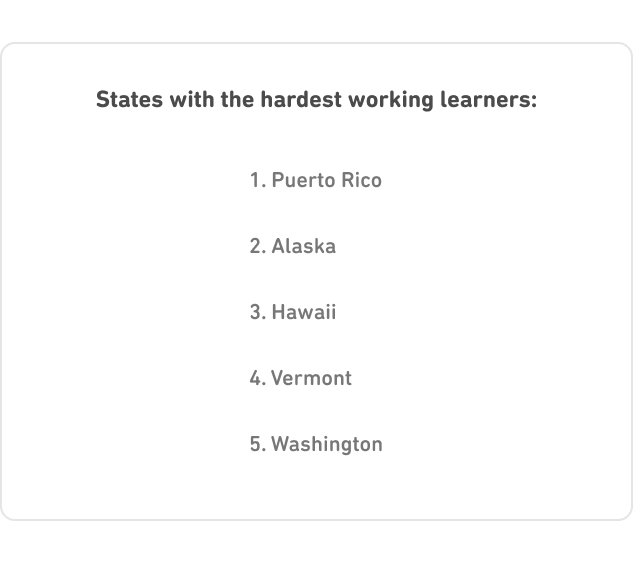 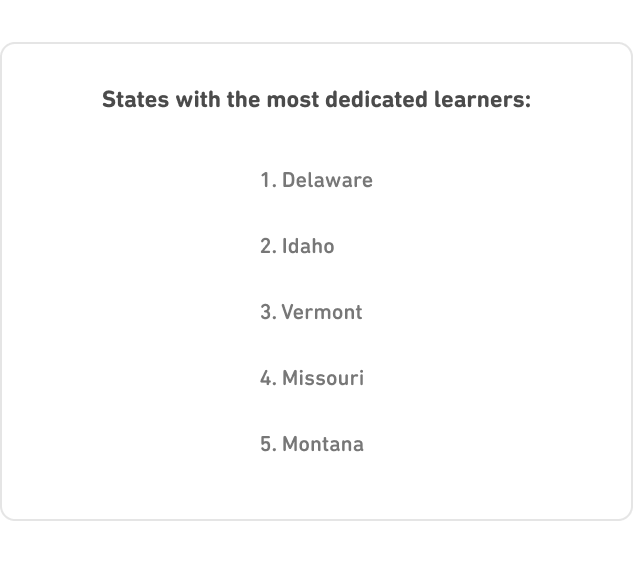 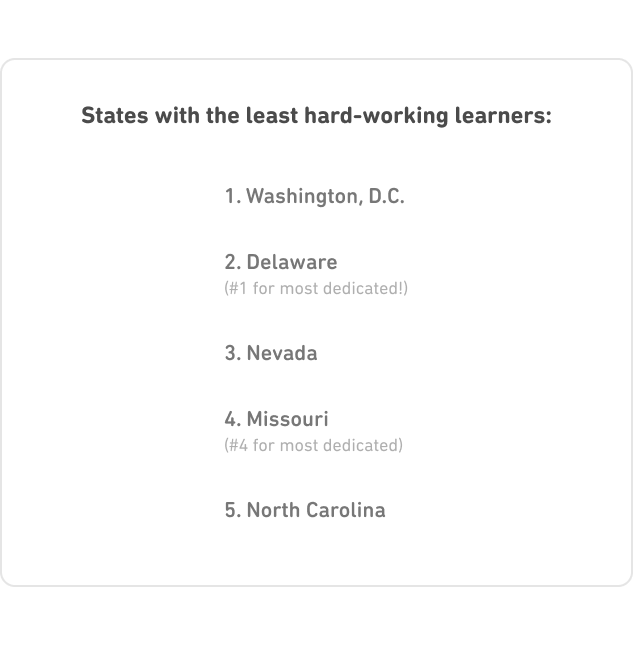 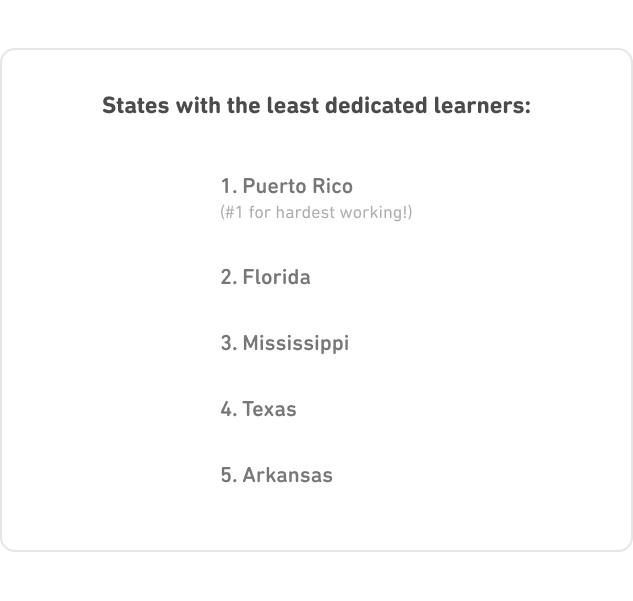 In cases where states ranked high for hard work and low for dedication, it seems learners spent more time and energy completing lessons, but doing so in bursts versus on a consistent or daily basis. For states that ranked high for dedication and low for hard work, learners were completing fewer lessons but doing them consistently in order to maintain a daily habit of learning. Take Puerto Rico, which was #1 for hardest working but also #1 for least dedicated; we believe this is due to tourists and visitors who visit and cram lessons into a shorter period of time.

And there you have it: the biggest trends and patterns we’ve found among US learners this year. Let’s keep up our learning and perhaps we’ll come out with a higher ranking in 2021! 😉

About the data
The 2020 Duolingo Language Report: Trends in the United States includes information about learners who studied languages on Duolingo between October 1, 2019 and September 30, 2020 and who completed lessons in the US and its territories. All data were aggregated by state/territory or by language to ensure learner privacy.