The cool thing about learning with Duolingo is that our lessons are developed by teaching experts—from linguists, to researchers, to former college language professors, we have a lot of people who are working to improve Duolingo because they just love language! Because they know so much about language, they know a lot about tools and resources that the average person might not use daily, but that any language learner would find fascinating.

Enter: the International Phonetic Alphabet (aka the IPA), which is just one example of these very cool language tools! It’s used by linguists and language teachers to teach pronunciation and represent the sounds of different languages, but most language learners don’t know how to use it! Lucky for you, we're here to satisfy your curiosity and help you use the IPA in any language you're learning. (And if you landed here by mistake, seeking hoppy beer recommendations… sorry. But stick around! We promise this is fun.)

So what is the International Phonetic Alphabet, anyway?

The IPA was first introduced in the late 1800s by a group of French and English language teachers and linguists, led by Paul Passy. It was based on previous efforts to come up with a better system of representing spoken language in writing. These language specialists were aiming to solve three major issues that arise when you work with languages: letters don’t always correspond to the same sounds, even within the same language; writing systems across languages vary a lot; and they’re limited in what they can tell you about a language’s sounds.

Issue one: It’s hard to know which sound goes with which letter

Many writing systems make it tricky to break down a word’s exact sounds. Due to the twists and turns of history, many writing systems use the same letter to represent different sounds, and/or different combinations of letters to represent the same sound. English is a prime example and is notorious for its finicky spelling and confusing pronunciation rules. But in the IPA, distinct symbols go with each sound. Note also the use of slash marks to distinguish IPA symbols from regular letters:

This clarification is one of the biggest benefits of the IPA. You don’t have to rely on a tricky English alphabet, for instance, and get confused as to which “u” sound you’re referring to: with the IPA, everyone can use one system to write about the same sounds. And of course, when comparing languages with different writing systems, it’s helpful to have a single system to refer to!

Issue two: Not all letters are created equal across languages

Even if you have a good understanding of a writing system (say, the Latin alphabet of English), your understanding of sounds and pronunciations won’t necessarily hold across languages. For instance, in French, the letter “j” most often stands for the sound /ʒ/ as in joie (the same sound in rouge), but in Spanish, “j” most often stands for the sound /x/ or /h/, as in ajo (the English pronunciation would be a-ho). So if you’re trying to compare languages and talk about their sounds, using what appears to be the same alphabet could actually confuse you!

Issue three: It’s hard to capture all the details in one alphabet

There are almost always exceptions, even in a language that uses an alphabet where one letter corresponds to just one sound. That's because certain details of pronunciation generally aren’t captured by standard writing systems. For example, take the Spanish word dedo (“finger”), which in IPA is transcribed as [ˈd̪e.ðo]. Those two “d” letters may look identical when the word is written in “regular” letters, but in a Spanish speaker’s mouth, they’re actually different! That’s because when a “d” sound occurs between two vowels but isn’t in an emphasized syllable, it becomes [ð] (which is actually the same “th” sound as at the beginning of English “them”).

However, the IPA is not a perfect system. It’s not very useful for showing more nuanced aspects of sounds; for that, linguists use more specialized systems, like /spectrograms/(https://australianlinguistics.com/acoustic-analysis-2/spectrograms/). Plus, it’s not really universal. Since it was created by Western linguists, it’s based on the Latin alphabet that many Western European languages use, and is therefore biased toward ease of use by people who already read and write languages that use that alphabet.

How do you read an IPA chart?

So, as we’ve seen, every language has a different way of using the same letters, even if they appear to be identical. One of the best uses for the IPA as a language learner (or actor, or singer!) is that it enables you to quickly see how things are pronounced. This supports pronunciation learning and allows you to figure out new pronunciations faster. You don’t need to learn the whole IPA to do this! But learning the symbols and sounds of your first language as well as the one you’re learning can really help from a comparison perspective, as we discussed earlier with the way “d” is pronounced in Spanish versus English.

In fact, the IPA represents 107 different consonants and vowels—but no language uses all of those! In English, just about 44 of those sounds are used, while Spanish has comparatively fewer, only using about 24.

The IPA chart is broken down into several sub-charts. At the top are the pulmonic consonants, meaning consonants made with air that flows from your lungs (this includes all of the consonants used in English). This chart is cleverly organized in a way that makes it clear how each sound should be pronounced: the leftmost column is labeled with the manner in which a consonant is pronounced (for instance, if it’s made with a buzzy vibration against a part of the mouth, it’s a fricative, like /s/ or /z/), and the topmost row is labeled with the place (for instance, bilabial means the sound is made using both lips).

In addition, sounds are listed in pairs: the sound to the right is voiced, meaning the vocal folds vibrate when it’s pronounced, while one on the left (if there is one!) is voiceless, meaning the vocal folds don’t vibrate to make it. (Yup, that means that /s/ and /z/ are produced exactly the same way, in the same location, and the only difference is their voicing! Say each one while putting your hands to the front of your neck to feel your vocal folds turning on and off to feel the difference.) 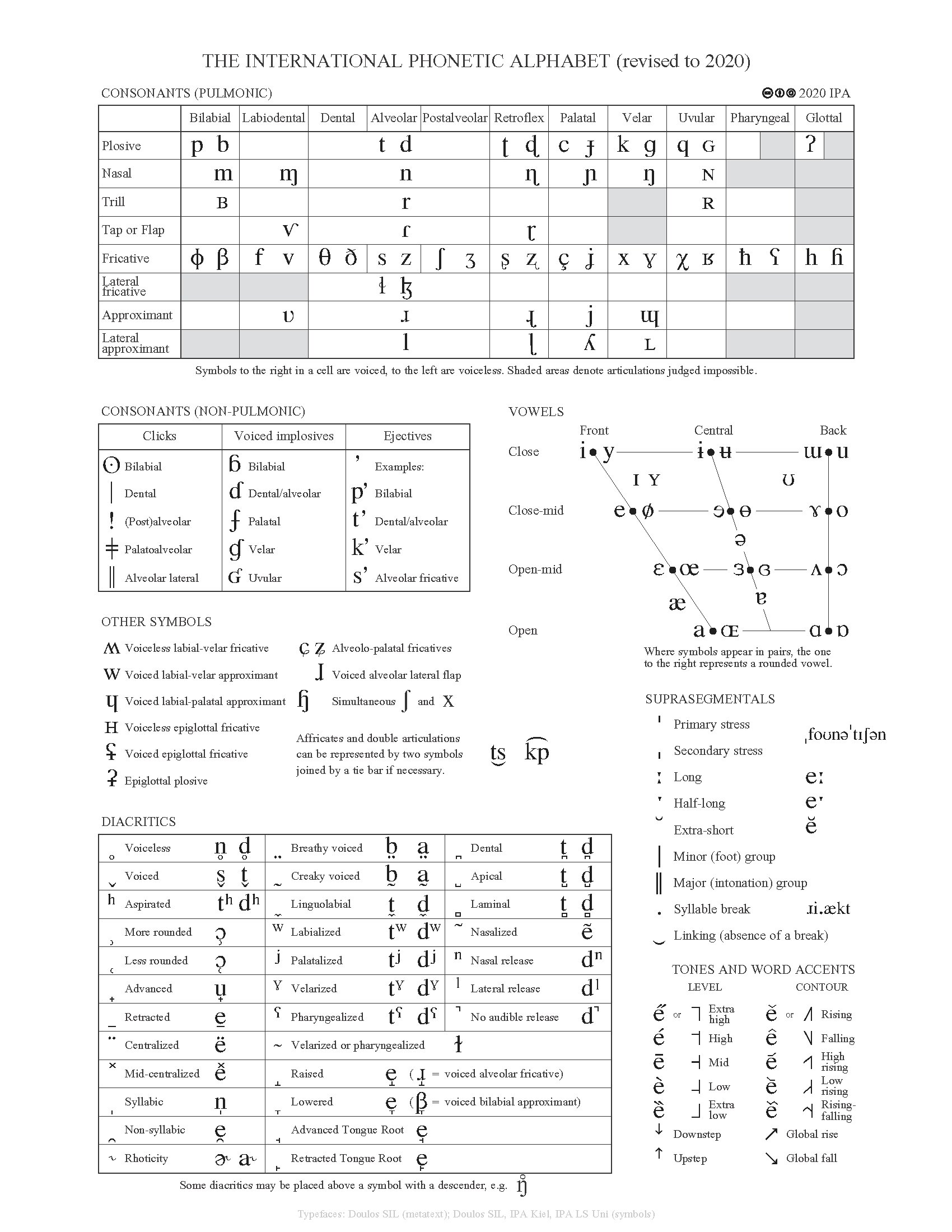 How do I use the International Phonetic Alphabet?

Start by comparing your own language’s symbols/sounds and the symbols/sounds of your new language. It’s helpful to search something like “IPA chart for Spanish” or “IPA in Spanish and English” to get comparative resources, like this or this.

Next, see where the sounds of your language and those of your new language differ — what sounds do your languages share, and what sounds are totally new? Which are slightly different, but made in a similar way?

Once you’ve read about the similarities and differences, practice, practice, practice! Your mouth needs help learning its new positions, just like a muscle when you begin a new sport. This interactive IPA chart is a great way to hear individual sounds and how they differ; this transcription website allows you to see how a given word is written in IPA in a few different languages; and this website/app for English, Spanish, and German uses the IPA along with illustrations of the mouth to clearly show how pronunciations happen.

IPA adventures on the horizon!

If you’re curious about linguistics, or even playing around with inventing your own constructed language (conlang), the IPA is invaluable. If you want to go deeper to see how sounds work across and within languages, the IPA will be your best friend! And with a best friend like the IPA, the opportunities are /ˈɛnd.ləs/.*

*That’s “endless” for you IPA newbies!