Every March, four-leaf clovers start popping up on store windows, major cities go green to celebrate, and parades and celebrations call, “Erin go Bragh!” (“Ireland Forever!”) as they mark St. Patrick’s Day. But there’s so much more to the Irish language than these seasonal moments, and in fact, learning a bit more about Irish can help all learners understand how language systems evolve over hundreds of years and carry important markers of community identity. Whether you’re an Irish learner or a curious future student, read on for a brief (but fascinating!) history of the Irish language.

You might be surprised that there’s a language used in Ireland other than English, or maybe you thought this language was called Celtic or Gaelic. What do these different words mean?

Linguists consider multiple languages to be a “family” when 1) they know there is a historical connection between them, and 2) they are more similar to each other than they are to any other languages. Irish is part of the Celtic language family, which also includes languages like Welsh and Scottish Gaelic. Older forms of the languages in the Celtic family were spoken by people that modern scholars now refer to as, you guessed it, Celts! Though scholars disagree on where in Europe the Celts originally came from, most agree they eventually found their way to western France, Great Britain, and Ireland from somewhere else, and now, six different Celtic languages exist today. (If you’re wondering, English is not one of these. It’s more closely related to German.)

The people that settled in Ireland and Scotland are now known as the Gaels, and they spoke Irish Gaelic and Scottish Gaelic. Usually, though, most people in Ireland just call their language Irish. Meanwhile, people in Scotland call their language Gaelic (which you can read more about here). So, if someone mentions that they use Gaelic, they’re probably talking about a language from Scotland, not Ireland! This is a good reminder to pay attention to the words people use to describe themselves so you can communicate your ideas as clearly as possible. 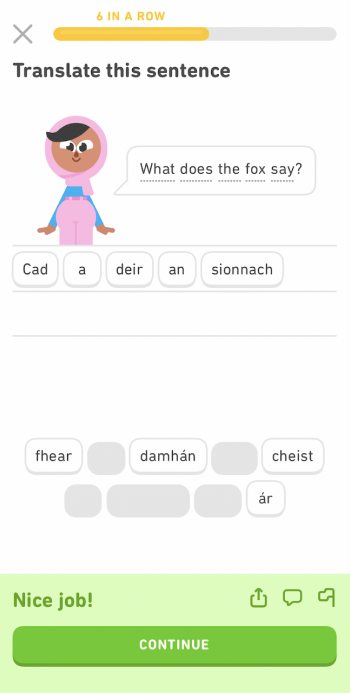 How many people speak Irish?

Over 1.9 million people in the Republic of Ireland and Northern Ireland know some Irish. But according to the 2016 census of the Republic of Ireland, only about 4% of people who know some Irish actually use it every day, which is one more thing that makes the language unique: the majority of people who know it have learned it from school rather than at home!

Currently, 290 primary schools and 78 secondary schools across the Republic of Ireland and Northern Ireland teach in Irish, and the language is also a required subject in the Republic of Ireland’s English-language schools, offering many who may not have grown up using Irish at home the opportunity to learn the language. People who do learn Irish at home and use it daily (so, that 4% we talked about above) live mainly in communities collectively known as the Gaeltacht, and they mostly live along the coast or in rural areas.

Learners studying Irish might want to connect with the heritage of their ancestors (something we’ve seen with other less-commonly studied languages), or maybe they studied abroad or worked in Ireland for a time! Interest in Irish is especially strong in areas like Boston, New York, Chicago, Newfoundland, and even Argentina, where many Irish emigrants historically settled, but it can be found in some unexpected places, too. Did you know that there are a ton of Duolingo learners studying Irish in India, or that Foclach, the Irish language version of Wordle, is played in more than 70 countries, including Togo? 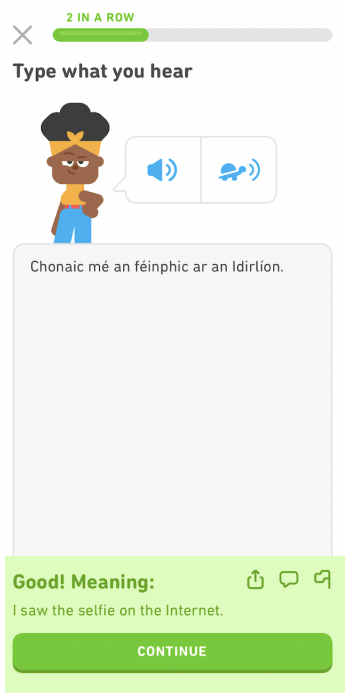 What’s so interesting about Irish?

The sentence Chonaic mé an féinphic ar an Idirlíon (meaning “I saw the selfie on the Internet”) illustrates a few of the things that make Irish such a special language. First, the action word (aka the verb) comes before the person doing the action. The sentence translates word for word as “Saw I the selfie on the Internet.” Only 7% of languages in the world have this kind of word order!

This sentence also provides some clues about the history of the language. Irish spelling traditionally uses only 18 letters. While that may sound simple, spelling is often tricky for learners because some words are written differently depending on how they’re used. Take a look at that sentence again, and specifically the word féinphic: the second half of the word comes from the Irish word pictiúr (picture). Depending on where in a sentence that word appears, it sometimes gets spelled phictiúr or bpictiúr, and the first sound changes from a “p” sound to an “f” or “b” sound. This happens to lots of words in Irish, and it has to do with what sounds surrounded those words in a much older version of the language.

This sentence also shows how Irish continues to evolve to fit modern contexts. They didn’t have selfies 300 years ago, so féinphic is a combination of the word féin (self) and pictiúr (picture), while Idirlíon (Internet) is a combination of idir (between) and líonra (network). Sure, people could have borrowed the English words for these new concepts, but instead they came up with uniquely Irish terms! The language is an important marker of identity and belonging for those who use it, and they adapt it creatively to express modern ideas.

Try your luck with Irish!

Irish is a great example of how a language can tell you lots about both the history of the people who use it and how they see themselves in the present day. If St. Patrick’s Day has piqued your interest in this language, consider giving it a try on Duolingo today!