Hello again, learners! Remember how I promised you a part two on grammatical gender? This is that part two! Let’s remind ourselves of the original question:

I’m learning French right now and there are a lot of masculine and feminine nouns. What's up with this? Why are croissants all male?!

Thanks for your help,
Noun-Plussed

Last time on Dear Duolingo we dug into grammatical gender, a system of noun categories. We talked a lot about how these categories, and whether a word is masculine or feminine, is unrelated to meaning. That means if you're a language learner, you won't be able to analyze the meaning of a noun and decide which category it belongs to. But, Noun-Plussed, there is good news: there are often other patterns you can look for!

Even among European languages, there can be big differences in how grammatical gender works.

How many categories are there?

Most European languages have either two grammatical gender categories (masculine and feminine) or three categories. The third category, called "neuter," just basically means "not feminine or masculine." It can include animate nouns for people (even if the person being referred to is a man or a woman), and will certainly include lots of inanimate nouns. And as we mentioned in the previous post about gender, there are lots of other ways languages, including European languages, categorize nouns. (We're looking at you, Dutch, Swedish, and all you languages where the two genders are "common" and "neuter.")

Some of the two-gender languages you'll run across are Catalan, French, Italian, and Spanish – and Arabic, which is a Semitic language (from a different language family entirely!). If you're studying German, Romanian, Russian, or Ukrainian, you'll be learning a language with three grammatical gender categories.

What words have to match the noun?

At its core, grammatical gender is a matching system: each noun belongs to some category, and when that noun is used in a sentence, words that are linked to it (like adjectives) have to be from the same category. As with everything, the devil is in the details: languages differ in terms of which words count as "linked" to the noun.

Did you see in the table above how the Spanish and Russian words for table and car also have a different gender in each language? That's because, as we remember, grammatical gender categories aren't about the word's meaning. 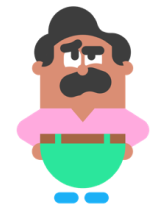 How to learn and practice grammatical gender

Now that you know how grammatical gender works in the language you're learning, here are some ideas for how to remember the gender of nouns:

And even though there aren't tons of examples where changing the noun category totally changes the meaning, it's always fun to see how different meanings can be! 😉 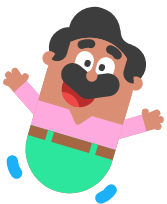 Ok, ok – I've told you a hundred times that you typically can't use a noun's meaning to know which category it's in. But there are other patterns you can use to help learn a noun's gender: in many languages, a word's ending can help you guess its grammatical gender category.

That's because many words have inherited their grammatical gender from earlier stages of the language, and earlier stages might have had a totally different noun category system. That's the case for Romance languages, which today have a much simpler system than Latin's rules for nouns, which combined grammatical gender with declensions and cases (two additional category systems I'm dying to write about).

In the next sections we'll show you the most important patterns in a few languages, but these are far from the whole story. These rules will cover the most common cases you'll encounter!

Tips for grammatical gender in Spanish and Portuguese

Spanish and Portuguese are closely related Romance languages, so they share a lot of gender category patterns. Not all words will have the same gender in both languages, but these shared rules cover a lot of ground.

After those two basic rules, the best thing you can do is look at the last syllable. In many cases, looking at the last few letters will be more helpful than looking at just the last one alone.

Here are some interesting nuggets about grammatical gender in Spanish and Portuguese:

Tips for grammatical gender in Russian and Ukrainian

The other difference between Russian and Ukrainian versus Spanish and Portuguese, is that you only need a few rules. Here they are:

Tips for grammatical gender in French

For French learners, unfortunately, there isn’t a great main rule like the -o/-a endings in Spanish, but there are some patterns you can look for – including some patterns related to meaning (!).

Tips for grammatical gender in Arabic

There are some exceptions to that useful rule in #2.

Since now you've learned basically all the gender rules for Arabic, you can get to learning some interesting facts about grammatical gender in Arabic:

Tips for grammatical gender in German

Oh dear. You've come here looking for tips for German. Maybe you're learning German and have a lot of questions – since German has three grammatical gender categories, and a case system, and no apparent correspondence between endings and categories, and the only words there to help you figure out gender actually have multiple uses (die, das, etc).

We're going to dedicate an entire Dear Duolingo post to helping you, German learner. Stay tuned. (Also, maybe don't spend too much time looking at the lovely lists of rules and patterns for these other languages, ok? Definitely don't read about Arabic.)

Look for patterns, and then get communicating!

When it comes to grammatical gender, look for patterns in word endings! It's easy to get caught up in the details of grammar (and then buy an etymology dictionary, and switch your major to linguistics, and get a PhD in language…), but don't forget that grammar is just in service of communication. Let grammatical gender be an endearing oddity of the language you're learning!

And keep sending us your language questions and ideas for posts at dearduolingo@duolingo.com! We'll be back next week with another column about language learning. 🤓