Did you know that some of the world’s best soccer players aren’t just amazing athletes but also successful language learners? Find out their stories here!

Multilingualism is common around the world, and there are many soccer players who grew up in bilingual families and communities—and then learned more languages with their teams. Here are a few exceptional multilingual soccer players:

Our languages tell part of our personal story, and so do our accents and dialects! How we use our languages and dialects expresses different aspects of our identity. Here are two soccer stars whose accents tell their story: 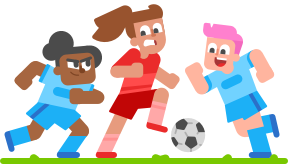 These seven players are just a few of the famous polyglot soccer players representing the sport around the world! This highlights something we at Duolingo love about soccer: It’s a multicultural, multilingual sport. Are you ready to learn your favorite player's or team’s language so that you can cheer them on? Who knows, it might help you land a selfie if they hear you! 😉