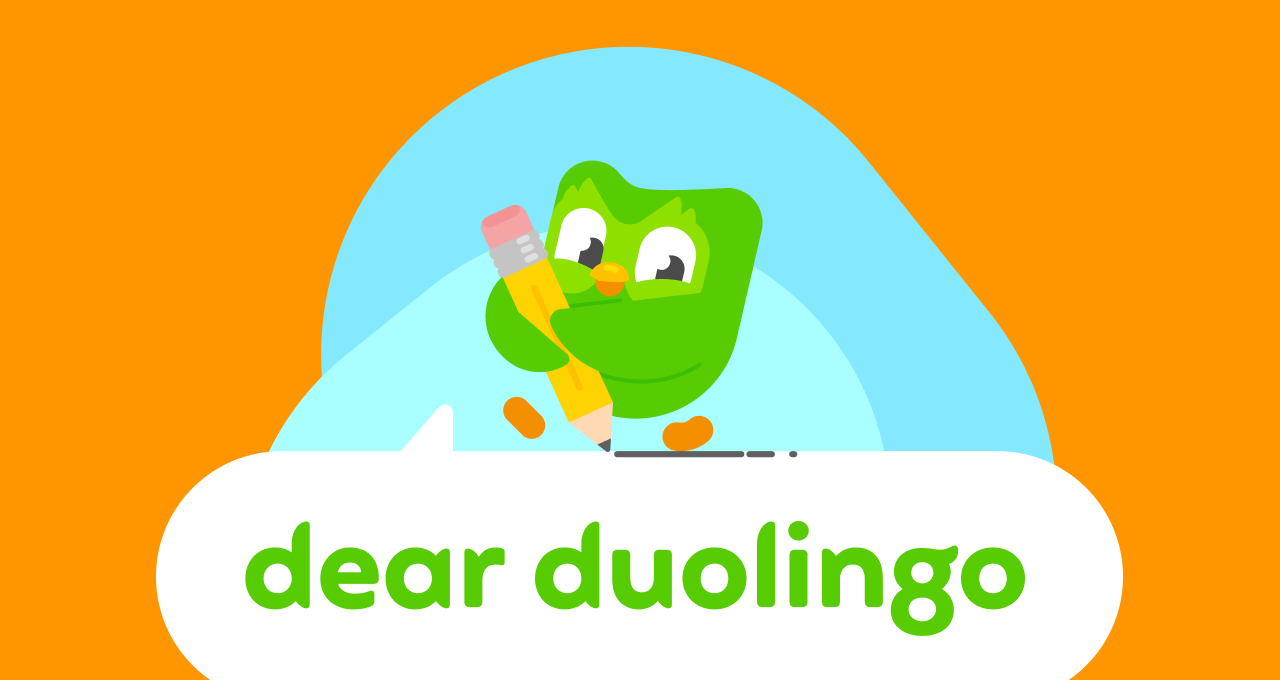 We're back with another edition of Dear Duolingo, a biweekly advice column just for language learners! (Normally we're here every other Tuesday, but we made an exception this week.) Today, Dr. Cindy Blanco, a senior learning scientist at Duolingo, is answering a question about dialects and accents. Read past installments on fluency and the most popular language in the U.S.

This might be a basic question, but I’ve been wondering: What's the difference between accents and dialects? And how do people develop such different pronunciations or words or grammar rules for one language? (It’s fun, but… help!)

This is a great question! It affects every person, in every language, whether it's the one you grew up using or a new one you're studying.

Everyone has at least one accent and one dialect—yes, even you!—and it's also possible to have more than one. Accents and dialects can represent the region you're from, your ethnicity or race, your age, your religious group, and many other dimensions—even your college experience, as Dr. Jessi Grieser explained at Duocon 2021! It's also common for people to switch their accents or dialects, either unintentionally or deliberately, as they move through the world, depending on who they're talking to, where they are, and what they want to convey about their identity. (Is this someone I want to show closeness to and so sound more like? Or do I want to show that I'm not a part of this group and so I want to sound less similar?)

And this is just thinking about the language you grew up using—but these layers are likely present in your second, third, and fourth languages, too. You can also have a "foreign" accent in one language that reflects the other languages you know. (In fact, the line between "native" and "foreign" accents can be really blurry!)

Today let's focus on accents and dialects in the language you grew up using. Think of this as an introduction, and in future weeks, we can answer more accent and dialect questions! (But only if you email us and let us know what those questions are!)

What's the difference between an accent and a dialect?

Alright, Sounding Board, the short answer:

So if you and I speak different dialects of English, we probably have some differences in what words we use (maybe I say zucchini and you say courgette), some grammatical rules (maybe I say Do you have any tea? instead of Have you any tea?), and how we use those words (some English dialects say Pardon? and I could too… but more natural for me is Excuse me?).

If you and I have different accents in English, we very probably have other differences too, like the ones mentioned above, but if we're specifically mentioning our accents, we mean only the pronunciation differences.

Communities that use a particular dialect or accent can range in size; some dialects include millions of people, and others only a hundred (and some probably even fewer!). For example, North American English refers to the dialect of English used in much of the U.S. and Canada by hundreds of millions of people—but within that enormous super-region are lots of smaller dialects of varying sizes, including African American English, Pittsburgh English, and Southern English.

How accents and dialects work

It's not uncommon for people to feel that they don't have an accent, particularly if most people around them speak the same way, and especially if the people in power around them speak similarly to them. Instead, a language can be thought of as a collection of dialects, all more or less understandable to each other. Or, as internet linguist and 2021 Duocon speaker Gretchen McCulloch recently tweeted, "A language is just some dialects in a trenchcoat."

Ok, so where do they come from, all these accents and dialects? First, it's useful to remember that language is one of many parts of shared culture and traditions that we have as humans, and so people use language in ways that match their communities and identities. Our clothes, interests, gestures, hair styles, and aspirations are shaped by our surroundings (even when those surroundings lead us to want to rebel against them and leave our community behind!). And as for language, we're creatures that like to sound like people we perceive as similar to us, or who we want to be more similar to.

The second thing to know is that accents and dialects typically evolve gradually, so any drastic differences you notice today probably started as smaller differences or were only used by a part of the community before they spread. Remember that game Telephone, where someone whispers a word to you, and you have to whisper it to the next person? Typically, after a word gets through the whole group, it's turned into another word entirely! You can think of language and dialects like a large-scale game of Telephone: two neighboring communities might have a small difference in a word, and the next two communities might have a different small difference in that word, and the next two have yet another difference, etc. And if that can happen for every single word, imagine how different dialects can get when you account for phrases, grammar, conversation rules, and–yes–accents!

Over time, dialects can become so divergent, or different from one another, that they stop being easily understood by each group. This often coincides with other changes, culturally and politically, and you might end up calling them different languages. In fact, Romance languages started as just different dialects of Latin!

1. No accent is inherently easier to pronounce or understand than any other

Of course, some accents are definitely easier for you to pronounce or understand, but it's all about your personal language experience! Your brain is best at understanding what it has been exposed to, no matter the actual sounds involved or what other people may think of the accent or its speakers. The same is true for pronouncing an accent: If you didn't grow up pronouncing a word a certain way, does that make the different pronunciation actually inherently hard or is it hard for you, given your language experiences?

2. Your accent is always changing, even if just a little bit

We are constantly tweaking our accents, in ways we probably don't even notice. That's because our accents (and really, lots of features of our language!) are very susceptible to peer pressure: Our brains track tons of details of the language around us (how exactly a vowel is pronounced, how often a particular word or phrase is heard, who uses which new words), and we often can't help but subtly change our own accents in response to what's commonly used around us. One really interesting example of this is Queen Elizabeth's speech: linguists have analyzed her yearly Christmas broadcasts and tracked over time how her vowels have become more like those of regular people in southern Britain!

3. "Standard" accents and dialects are kind of a myth

Which accent or dialect gets treated as "standard" has everything to do with the people who use it, and nothing to do with the linguistic features of the language. You might sometimes hear people explain why the "standard" makes more sense or does something more logically, but the real rationale actually goes the other way: Whatever pronunciation, word, phrase, or grammar the people in power use, there ends up being an explanation why that is a better way of speaking. But there isn't some neutral or inherently "better" sound/word/phrase/grammar. And it's no accident that many "standard" varieties happen to coincide with whatever region or city ends up being politically powerful, like the capital of a country.

Accents have the same underlying principles in all languages, but the result can look different depending on the language! In English, the biggest difference between one accent and another is typically in how people pronounce the vowels. Can you think of any English examples? "Potato" has a whole song about its different pronunciations, where the consonants P-T-T are basically the same, but British and American speakers make the vowels differently. (Note that this is a huge generalization about a global language spoken in dozens of countries around the world, and there are definitely lots of consonant differences across the globe, too!)

On the other hand, many dialects of Spanish have pretty consistent vowels, and it's the consonants that can sound really different. In Spain, most dialects of Spanish have a "th" sound (like in English "think") wherever you see "z," "ce," and "ci" written, so casa (house) and caza (he or she hunts) sound different. "R" is also pronounced differently depending on the accent, so in the Caribbean the "r" sound will be more like an "l" or even an "h," depending on the word and what accent the speaker has (Cuban, Puerto Rican, Dominican, etc). And the Argentinian and Uruguayan accents typically have a "sh" sound, making words like calle (street) sound like "cashe"! (Same caveat here: There definitely can be vowel differences across Spanish dialects! This is a generalization for sure.)

Spoken languages aren't the only ones that have accents. People who use signed languages, like American Sign Language (ASL), also have accents! Signs can be described by the shape the hand(s) are in, the movement of the hand(s), which way the hand(s) are facing, the location of the hand(s), and other features of the body and face when producing the sign. So an accent in a signed language is when one of these features is a little different for one signer versus another. So just like I said for English that the vowels in potato/potahto can differ, in ASL one user might have a slightly different shape of the hand than another.

There's your intro to accents and dialects, Sounding Board. This is such a rich topic that touches on linguistics, history, anthropology, politics, and language learning, so let us know what else is on your mind or what you'd like to learn more about! You can send your questions to dearduolingo@duolingo.com, or by tag us on social media with #DearDuolingo. See you in two weeks!