The pandemic has forever altered how we approach learning, at every level of education. But how has it affected how talented young people feel about studying and working overseas? How do they feel about the proficiency tests needed for applying to international study or work opportunities?  The Duolingo English Test team was particularly interested in the perspective of young people migrating to the UK and partnered with Public First to learn more. We polled more than 1,900 students in China and India and learned more about what they hope to gain from international study and work, as well as the obstacles they face when applying for opportunities abroad.

As the world enters a new phase of the pandemic, with fewer travel restrictions and a host of effective vaccines, people are eager to study and work abroad. Nearly half (43%) of the young people we surveyed in India said the pandemic had no effect on their desire to study abroad, while a quarter said it has actually increased their desire to attend school internationally. 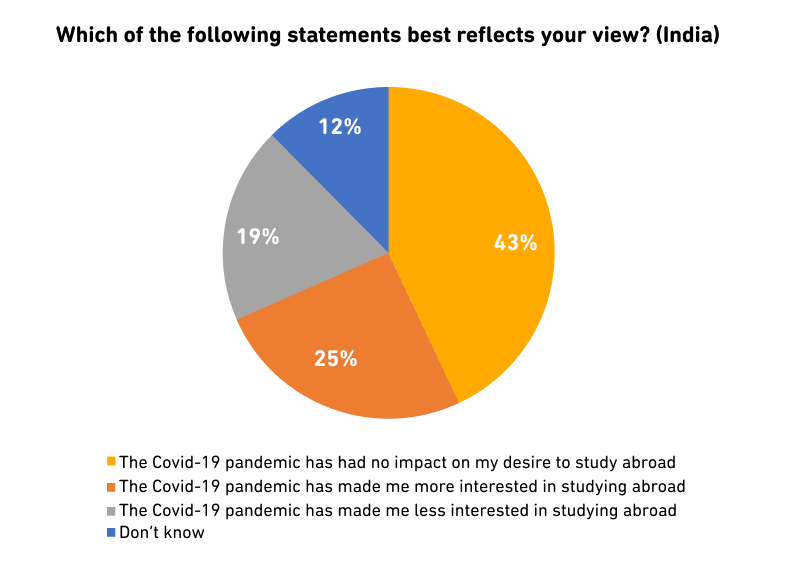 English-medium work and education are in high demand, thanks to the role English plays in the global economy. In 2021, there was a significant increase in visa applications to English-speaking countries. The UK remains the most attractive destination among students in China and India, with the US a close second, but Australia and Canada are becoming increasingly popular.

In order to work or study in an English-speaking country, you often must demonstrate that you speak English, via an English language proficiency exam such as the Duolingo English Test. Universities and immigration departments set their own requirements for which tests they accept. More than 3,500 higher education programs around the world have started accepting digital tests like the Duolingo English Test, but in many instances, like if you’re applying for a study or work visa to move  to Australia, Canada, or the UK, the government still requires you to go to a physical test center. This is starting to change: in 2021, Ireland became the first government to officially accept the Duolingo English Test in visa applications.

Imagine you’re a talented graduate in China with professional experience, eager to work at a company in the UK. To apply, you’ll need to take an English proficiency exam that’s been approved by the UK government. Currently, the only approved tests must be taken in-person at a Secure English Language Test (SELT) center, and these are costly. Plus, you live in a small town, hundreds of miles away from the nearest SELT center, so if you can find an available appointment, you’ll also need to pay for travel to and from your test appointment.

There are just over 1,000 SELT centers in the world that are approved by the UK —and these are not equally distributed. In densely populated countries like Mexico, Brazil and Indonesia, one center serves upwards of 30 million people from a single urban location. Meanwhile, 82 countries have no SELT center at all, meaning half a billion people must travel internationally to take the English language test needed to apply for a visa to enter the UK.

There are numerous factors that affect access to testing that have nothing to do with a would-be applicant’s talent, drive, or ability to succeed. The students we polled helped us understand just how big these barriers are. About 40% of poll respondents in India cited travel time as a reason why they would be deterred from taking an English proficiency exam. 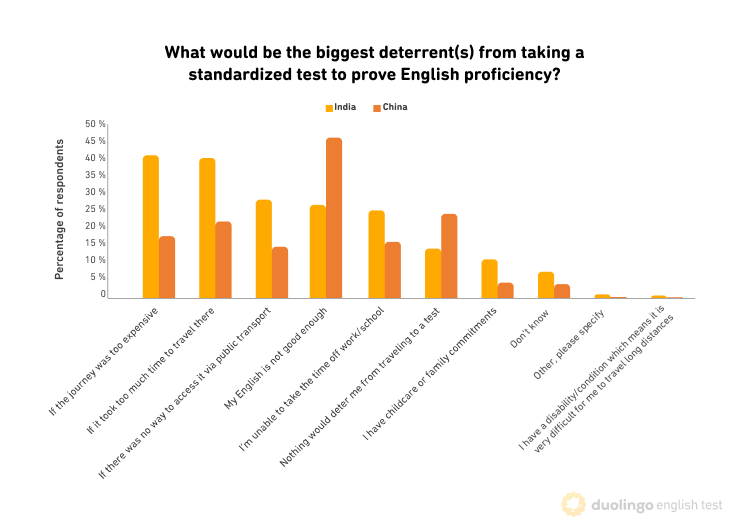 The fragility of the in-person testing system has always existed, but was fully exposed by the COVID-19 pandemic. Many test centers shut down, and test appointments became even more scarce. As recently as February 2022, one-third of SELT test centers in China remain closed. Meanwhile, people in areas experiencing armed conflict, most recently Afghanistan and Ukraine, have entirely lost access to SELTs.

Recent global crises have shown us that even if there were test centers in every corner of the globe—which is far from the case—that still wouldn’t ensure access to tests during threats to public safety. By only accepting tests that are taken in person, institutions around the world are closing the door to millions of would-be applicants who are unable to access this format of test.

There’s a better way to test

For years, the only way to ensure test security was to supervise test takers in person. But the world has changed, as have many industries along with it. Just as we are now able to bank, buy cars and even visit the doctor online, it’s entirely possible to take a secure, high-stakes exam in your own home.

More and more, we’re seeing high-stakes exams like the SAT move online—while others, like the Duolingo English Test, were developed with a digital-first mindset. With virtually every modern industry embracing a digital format, this trend is inevitable, but the good news is: it’s a win for global education access! Digital at-home tests are more resilient in the face of public health crises, social unrest, and an unpredictable future, and are the only way to ensure people in every country of the world have access to high-stakes testing, and the endless opportunities that follow.

To learn more check out the video below and read the full report, published by Duolingo in partnership with Public First.