By now, if you’re a French-learner or Francophile, you’ve no doubt heard of (if not binge-watched!) the hit Netflix series Lupin. You may even know that the series takes its inspiration from the adventures of the celebrated literary character Arsène Lupin, the infamous “gentleman thief” created by writer Maurice Leblanc in the early 20th century.

But what you may not know is that there was once a real-life Lupin, a man named Alexandre Marius Jacob, whose life was more adventurous and daring than any character from a book.

Jacob is the subject of the newest season of The Duolingo French Podcast, a six-part miniseries titled The Rebel Thief (Le voleur rebelle). It’s the first serialized story we’ve produced for the French Podcast, and the first time Jacob’s story has been widely told to English-speaking audiences. Most importantly, as with our other French podcast episodes, the season has been specially designed for intermediate French learners (for app users, that means Unit 5 and above), with the goal of keeping audiences at the edge of their seats episode after episode, hungry to find out: will this audacious and idealistic burglar ever get caught?

Q: Can a thief really help me improve my French? A: Mais, oui!

In November 2020, we published Duolingo’s (and the world’s) first true crime podcast for Spanish learners. The Great Argentine Heist (El gran robo argentino was an instant success, garnering hundreds of thousands of episode downloads and prompting speculation on Twitter about if, and when, the people behind Argentina’s most notorious bank heist would ever be brought to justice.

The series was such a hit, we knew our French podcast audience deserved its own serialized season, one operating on the same principle that undergirded El gran robo argentino: Make learning fun. At Duolingo, we believe that excellent storytelling leads to greater learner engagement, and greater engagement leads to more time spent learning.

Put more simply: you’re going to practice your French listening skills for longer if you like what you hear. And who wouldn’t like a story about an idealistic French Robinhood? 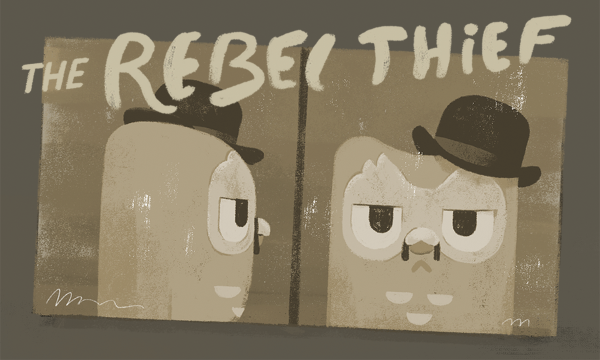 The making of a thief

When our French production partners at Adonde Media came to us with a miniseries idea that had taken place over 100 years earlier, during France’s Belle Epoque, we were skeptical at first. We’d only ever produced stories featuring real, living people. We had never produced a work of historical fiction before.

But our creative team believes in taking big risks if it means taking learning to great, never-before-seen heights. So we dove head-first into the project, and set off to produce an unprecedented work of serialized historical fiction, complete with voice actors, stellar sound design, and a hair-raisingly good original score.

Sometimes, people ask our team of creative producers why we don’t just point language learners to Netflix and Amazon to practice their listening skills with hit international shows like Squid Game (and Lupin!). While these shows can be fun, they’re not designed for learners, and have lots of challenging slang, niche cultural references, and unfamiliar regional accents. Duolingo’s original podcast content, on the other hand, is designed to meet the needs of intermediate learners exactly where they are, and boost their confidence, while still offering the kind of quality narratives found in today’s hit series. We blend easy-to-understand storytelling in the learning language with English interludes from our series’ hosts to guide the listener. As learners seek more challenging content, these podcasts are the perfect supplement to their daily lessons.

For The Rebel Thief, we worked closely with a highly regarded French historian to put together a show that is both fictionalized and historically accurate. Everything the characters say, think, and feel is invented, but everything that happens to them – everywhere they go and everything they do – is based on documented historical events. The resulting miniseries is a work of audio storytelling so original, and so compelling, we believe intermediate French learners everywhere should tune in.

Like everything we do at Duolingo, this podcast miniseries is loads of fun. It’s also free – you can find The Rebel Thief on Apple, Spotify, or wherever you listen to The Duolingo French Podcast. The full miniseries will soon be available inside the app, too.

We hope you’ll agree that your French listening skills have improved after spending 6 episodes immersed in a world of daring French intrigue. Improving one’s listening skills in a new language takes a lot of time and patience, but we’re here to make sure you enjoy the journey.