If you sat down and tried to dream up poetry from the dawn of time, what would those verses be like? If you wrote magic spells, what would those spells contain? If you were to imagine the language of immortals, how would it sound? For J.R.R. Tolkien, the answer was quite clear: it would be a lot like Finnish.

Tolkien wrote the Lord of the Rings saga, and for the language of the High Elves, who dwell with the gods, he was inspired by otherworldly Finnish. Tolkien was obsessed with Finland and Finnish, teaching himself the language from grammars and dictionaries and intensive study. And now, with the new Finnish course on Duolingo, you can be part of the Fellowship, too! In this blog post, we'll give you a little peek into the mad, wonderful world of Finnish and those who love it. 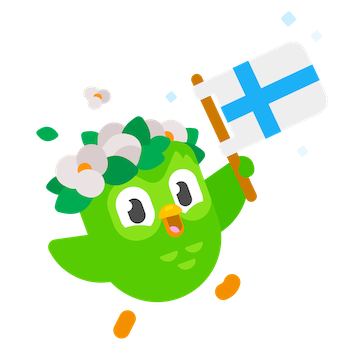 If you've never had an encounter with Finnish, you may be asking yourself: why? Why Finnish? What makes it so magical that Tolkien would make it a language of literal magic? What makes it so fascinating that Duolingo fans would request it more than any other?

The first thing to know about Finnish is that it really is special — it's unlike the Scandinavian languages spoken by its neighbors and it has some unexpected cousins of its own. Let’s take a look at a few phrases:

As you can tell from the above, Finnish just looks different. Swedish, Danish, and Norwegian are all Germanic languages, closely related to each other, to German, and to English. See how all the words for 'languages' — språk and sprog — look a bit like the English words speak and speech? And the other Germanic words for ‘Northern Lights’ look like north (Nord or Norr) and light (lys) put together, which is basically what we do in English, too.

Finnish, though, isn’t related to any of these languages even distantly! It's part of a group of languages that were spoken in the most northern reaches of Europe in the Arctic circle, throughout central Europe, and all the way east to Siberia, long before Swedish, Russian, and other more familiar languages moved in. This means Finnish shares more with Hungarian, located over a thousand miles away, than it does with Swedish just next door. (Swedish, meanwhile, is more like Hindi than it is like Finnish!)

What makes Finnish so interesting

Finnish is unlike any language you’ll ever study, in almost every way. Finnish words will be almost wholly unfamiliar; the only Finnish word in regular use in English is sauna, and it shares little vocabulary with other European languages.

Finnish has few irregular verbs (yay!), but an excess of noun cases (uh oh). In English, nouns typically have two forms, singular and plural, so the word office becomes offices, but it'll never turn into anything else, no matter what else is happening in the sentence: The office is here, I see the office, I'm going to the office, I use my bathroom as the office, I'm going into the office from next door, Help! I'm falling off the office! But in Finnish, every one of those sentences would have a different form of office, in part depending on the role the word has in the sentence (subject? object? something else entirely?!) and the direction of any movement. Learners of Russian lament the six grammatical cases they have to figure out; learners of Finnish scoff, because Finnish has fifteen. And, mind you, this doesn't include any of the other new grammatical patterns you've never even thought of before! For example, Finnish uses suffixes called particles to form some questions and to change the tone, meaning, or attitude the speaker has about what's being said.

Finnish also sounds different from other languages, adding to its allure. Some of its sounds can be found in French (like the vowel in rue ‘street’), others also show up in Welsh (like the one at the beginning of hiaith ‘language'), but there are also some rules reminiscent of Turkish (all vowels in a word must be from the same part of your mouth) with Japanese mixed in, too (tons of doubled consonants). Even familiar sounds are combined in uniquely Finnish ways (and wait till you see how sounds get mixed up in those fifteen cases!). It’s no wonder that Tolkien saw Finnish as magical: when you put all these characteristics together, Finnish seems like it came from another world. 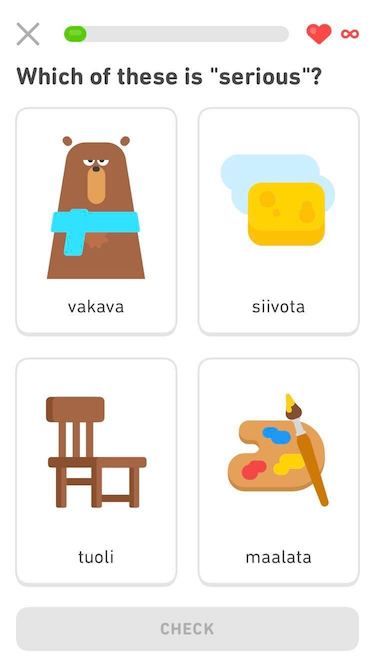 Students of Finnish are often quite different from your average language learners. When you launch into this language, you’ll instantly join a funny, enthusiastic, rambunctious, meme-loving community to support you and keep you going on your Finnish journey. It was the passion of the Finnish learner community that drew our attention to the language. “Bring Finnish to Duolingo!” was the title of one forum post. “Is there a realistic chance of Finnish on Duolingo?” asked another. Another simply said “Finnish!!!!!” A straw poll was conducted asking Duolingo fans which course they would want to see come into the Incubator next; Finnish placed near the top, ahead of fan-favorite languages like Thai, Serbian and Croatian, and Latin.[1]

Studying Finnish means joining this learner community to celebrate both language learning in general and the magic of Finnish in particular. Camaraderie around Finnish might well be because of, and not despite, its linguistic complexities and the challenge it poses for English speakers. Finnish learners make a lot of jokes about the self-inflicted challenge they have chosen for themselves, and they clearly take great joy in the community around learning Finnish.

Deciphering the secret of happiness

The Finns themselves are consistently rated as the happiest people in the world. It's possible that Finnish happiness is due to having a front-seat view of the Northern Lights, to observing the natural world with a sensitivity that extends even into their nouns and adjectives, or maybe to boasting the most saunas per person, or maybe to enjoying one of the best education systems, but at Duolingo, we'd like to think their exceptional language is the real source of Finnish joy.

Duolingo’s new Finnish course will make it easier than ever to learn Finnish — to expand your knowledge of languages, to challenge yourself, and to understand why Finnish is so magical.