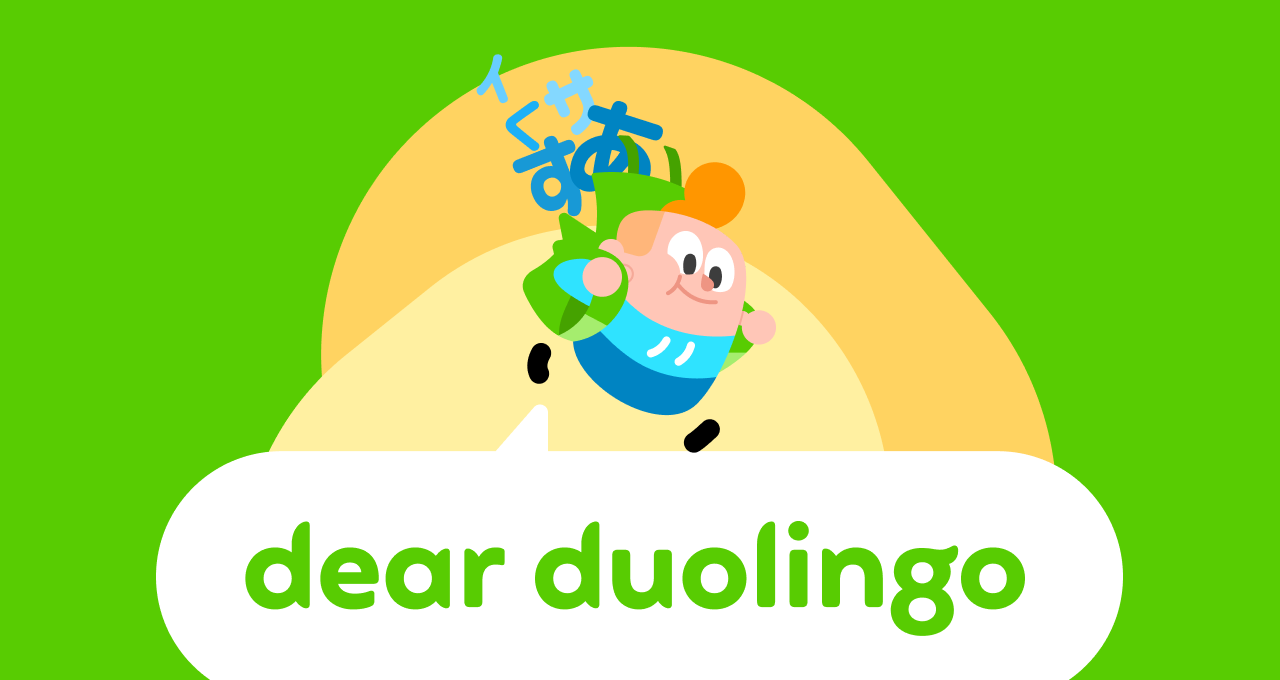 Konnichiwa! I’m Anthony, a Curriculum Designer at Duolingo working on our Japanese course for English speakers. Before coming to Duolingo, I completed my master’s in East Asian Languages and Cultures and taught Japanese while translating video games on the side. The writing system is one of the things I find most fascinating about Japanese, so I’m really excited to tackle this week's question!

I very recently started learning Japanese and realized that they have three different alphabets: hiragana, katakana, and kanji. Why do they have three instead of the usual one? What's the difference between them? Which one should I use for different situations?

Thank you,
Hiragonna Need Some Help

Thanks, Hiragonna Need Some Help! With so many different kinds of characters, it’s no wonder Japanese beginners find it challenging to keep track of which system is which. But don’t worry, I’ll cover a couple of tips and tricks for how to tell them apart so you know when to use them.

Long story short, hiragana and katakana both represent sounds, while kanji represent meanings. Before we dive deeper into other differences, let’s look at a brief history as to how we got to these three writing systems!

Where did the Japanese writing systems come from?

Long ago, Japanese didn’t have any writing system at all until kanji (Chinese characters) arrived from China (sometimes through Korea) over a thousand years ago. Japanese government officials, scholars, and religious leaders simply started out learning and using Chinese to record information, but eventually wanted to be able to write down Japanese too. But one challenge of using only kanji to write Japanese is that kanji characters mainly represent meanings, so it wasn't straightforward how to make Chinese-specific kanji map onto a very different language with a very different grammar and sound system!

To solve this problem, a special set of kanji called manyougana were chosen to represent Japanese sounds. Now a word, like a Japanese verb, could be made of a combination of kanji meanings and manyougana for endings! Those manyougana characters were eventually simplified into hiragana and katakana. (Check out this video to watch that simplification process in action to create the characters あ a, い i ,う u, え e, and お o!)

What is each Japanese writing system used for?

Modern Japanese uses a mix of hiragana, katakana, and kanji, but they aren’t just thrown together randomly. (Phew, right? 😅) Each system has its own part to play and is important to learn in order to read Japanese and get your brain into “Japanese mode.”

When to use hiragana (ひらがな)

Hiragana represent sounds in Japanese. However, unlike an alphabet that represents individual letters, each hiragana usually represents a combination of a consonant and a vowel. For example, the character ひ represents the sounds “h” and "i” together as hi. Hiragana are used to write particles, adjectives and verb endings, and other parts of grammar. One way to tell hiragana apart from katakana and kanji is that hiragana tend to have a lot of round “bubbly” shapes.

Some common phrases like こんにちは (konnichiwa, “hello”) and common adjectives like かわいい (kawaii, “cute”) are also often written in hiragana.

Hiragana are also used as a guide to show how kanji are pronounced, especially if the kanji are rare or are parts of people’s names. You might see hiragana in parentheses next to the kanji, or the hiragana might be in a smaller size either above or below the kanji.

One of our new features in the Duolingo course allows you to turn on hiragana pronunciation guides in the settings. When you forget how to write a word in kanji, hiragana can come in handy as a substitute, too!

When to use katakana (カタカナ)

Like hiragana, katakana also represent sounds, but they’re not as common because their uses are much more specific. Katakana also tend to have a lot more straight lines and sharp angles compared to the bubbly hiragana.

Katakana have kind of a grab-bag of uses that are a little different from other words–a bit like using italics, bold, or ALL-CAPS in English when you want to make a word stand out. 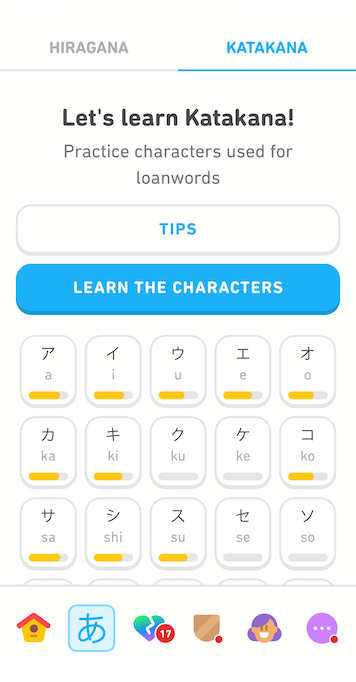 Katakana are mainly used for words borrowed from foreign languages, especially English, but many come from other languages, too, such as Portuguese, Dutch, German, and French. エレベーター (erebeeta) comes from the English “elevator,” while パン (pan, “bread”) comes from the Portuguese pão.

Names of foreign people and places are also written in katakana. For example, the U.S. city of “Pittsburgh” is written as ピッツバーグ (pittsubaagu). A lot of titles of foreign books, movies, TV shows, and video games also tend to be converted into katakana instead of being translated into Japanese words.

But there are other common cases where katakana are used for words that aren’t strictly foreign:

When to use kanji (漢字) 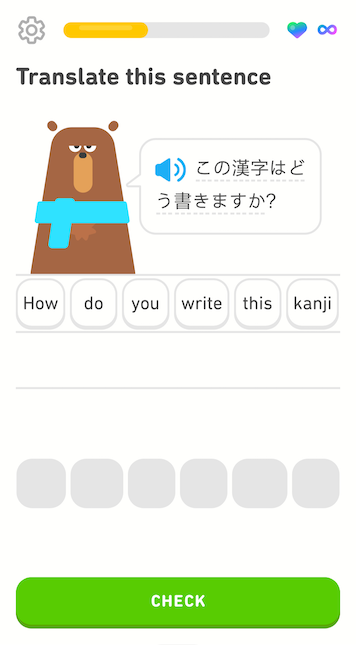 Because kanji themselves don’t contain information about things like the tense of a verb, they’re often combined with hiragana to write out the full verb. Like in the example at the beginning of this blog post: 笑いました (waraimashita, “laughed”) combines the kanji 笑 for “laugh” with the hiragana ました (mashita), which tells you the verb happened in the past.

Where you'll see these Japanese writing systems on Duolingo

Right from the start, you'll see both hiragana and katakana in all your Japanese exercises on Duolingo—and you'll also see romaji, a system that represents how Japanese is pronounced using the Roman alphabet. That means you can jump straight into learning basic Japanese words and phrases without knowing all the hiragana and katakana! There will be lots of time to work on those. 😅

Since kanji mainly represent meanings rather than sounds, you'll be introduced to those after you've had a chance to absorb some hiragana and katakana. When a lesson has new kanji, you'll first see introductory exercises that focus specifically on the new kanji, right at the very beginning of the lesson (even before you use them in the usual exercises). We make sure to cover plenty of kanji in the lessons you’ll see… and stay tuned for exciting kanji updates to come! 😉

Luckily, you're already getting plenty of practice just going through the exercises in your lessons. The more you see the three writing systems in vocabulary, sentences, and Stories, the more they’ll start sticking! Here are even more ways you can practice reading and writing in Japanese:

It’s a journey that builds “character”!

Whether you’re learning Japanese to read manga, sing your favorite anime opening themes at karaoke, or order coffee at a cat cafe in Tokyo, every little bit of practice counts, and with a little patience, you’ll have learned the characters before you know it!

For easy reference, here are the basics about the three writing systems:

Until next time, またね！(Mata ne)!

For more answers to your language and learning questions, send us an email over at dearduolingo@duolingo.com!