Languages vary a lot in how they use writing to represent sounds and words. For language learners, this can mean an extra challenge for learning to read and write.

For some languages, learners might have to learn a new alphabet of individual letters, like in Greek and Russian. For other languages, the rules about writing could be totally different from how we think about letters in the Roman script used in English. For example, in Korean, letters are combined into blocks that might look like one character, but they actually correspond to syllables (multiple sounds together, like bu or di). In Chinese, characters are based on meanings instead of being purely sound-based (诗 'poem' and 湿 'wet' are pronounced the same). That could mean learning vocabulary, pronunciation, and writing all at once!

In this post, we'll be sharing some of the newest features we're working on to help Duolingo learners gain important reading skills in languages that use writing systems different from their own. Read on to learn about one of our favorite new features for the Japanese course!

What’s in the new feature?

Japanese is one of the hardest languages to learn to read, so we made learning fun by adding new exercises that allow you to practice tracing, spelling, and reading the characters. You can find an icon for this new feature at the bottom of your home screen. When you tap it, you’ll see a chart that shows all the characters you’ll learn. You can tap one to hear what it sounds like or tap “Learn the Characters” to start a lesson that focuses on just a few characters from the chart at a time. We select the characters you see in each lesson so you’ll start with characters that are easier to tell apart and gradually add harder ones. We keep track of which characters you’ve already seen and help you alternate between practicing new characters and reviewing those you’ve seen before. As you keep using the feature, your literacy will get better and better! After completing each lesson, you also earn XP, and the chart lights up to show your progress. 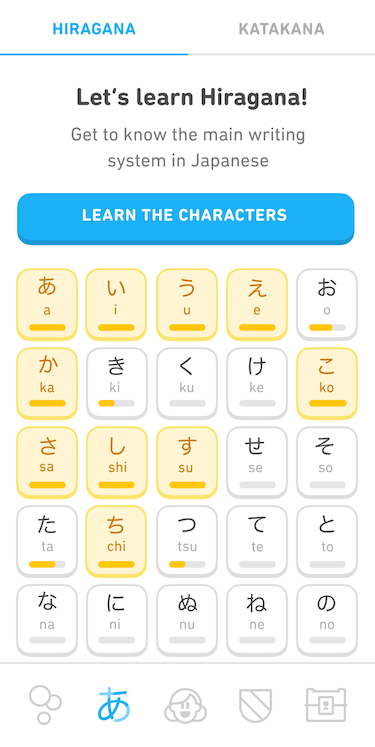 In the new lessons, you'll trace the characters so you gain more familiarity with what they look like. Even though this may feel like writing practice, these exercises are actually helping you learn to read by teaching you to recognize the shape of each character! You’ll also answer multiple choice and matching questions to practice connecting the written symbols to the sounds they represent. In addition, you’ll get to spell what you hear by tapping one character at a time.

Why Japanese, and what’s next?

We started with Japanese because it has three different writing systems, all of which can appear in the same sentence! Since this can be challenging for beginners, we wanted to help you focus on one thing at a time. Now, when you complete lessons in the main part of the course, you can devote your attention to learning meaning, and when you do lessons in the new tab, you can concentrate on learning how to read the characters. Currently, the feature teaches hiragana and katakana, which are both writing systems in which every character represents a pronounced syllable (like “ka” or “su”). In the third writing system, kanji, there are over 2000 characters, each representing a meaning. That’s a lot to learn, so we are continuing to explore the best way to teach all of the kanji.

Writing systems in other languages do things that Japanese doesn’t, so we’re also planning on adapting this feature to address some of those differences. In Korean, for instance, some syllables put letters together from left to right, but others do it from top to bottom. For example, combining ㅁ m and ㅏ a gives you 마 ma, but if you combine ㅁ m and ㅗ o, you get 모 mo! We are working to make sure our lessons reflect how various languages represent text and help learners get used to reading in a new way.

Writing systems are as diverse as languages themselves. At Duolingo, we’re always thinking about the best ways to teach reading and writing for all of the languages in our app. The new character feature is currently available on Android in our Japanese courses for English and Chinese speakers. We're working on lots of improvements, so stay tuned for more reading and writing exercises on all our platforms (iOS, Android, and web) and in even more languages with non-Roman scripts.