Duolingo offers 95 courses in 38 languages — more than any other language learning platform, and all for free! Our experienced language and teaching experts develop new courses, improve existing ones, and create engaging language tools like Stories and Podcasts. But the unparalleled diversity in course offerings is possible through our incredible volunteer contributors. This community collaborates with our in-house experts, who offer pedagogical and technical training and support, and it's because of them that Duolingo is able to create new courses faster than we could alone.

So how do our curriculum designers organize an entire language into the right sequence of topics for a learner? We recently interviewed our course creation teams to learn more about the process that delivers world-class language courses to our learners.

When you decide to create a new language course, where do you start?

First, our language learning experts develop lists of communicative goals, the words and phrases needed to accomplish each goal, and every grammatical concept we'll teach in the course, organized by proficiency level. We draw on our backgrounds in language teaching, linguistics, curriculum design, and pedagogy (and as language learners ourselves!) to make sure that these curriculum lists lead to courses that are practical, effective, and cover topics at the right pace.

All new Duolingo courses align with the Common European Framework of Reference for Languages (CEFR), which describes what learners can do with the language at different proficiency levels; for example, a learner in the first level, A1, should be able to ask and answer questions about where they live. But the CEFR doesn't give more detail than that, so that's why we spend so much time researching and developing the exact curriculum for each of our courses. We prioritize the most common words and phrases, so that learners can use them in meaningful ways in lots of situations. At this stage, we also do a lot of thinking about what topics will be particularly challenging for learners with a given language background.

These lists are really detailed and really important. Once our language- and level-specific lists are complete, we have what we need to start putting all the puzzle pieces together in the carefully crafted sequences that make up the "skills" (units) in the new course!

How does that work at the level of an individual skill?

For example, once you decide on vocabulary about shopping, how do you turn that into a skill?

We want all skills to naturally introduce vocabulary and grammar together, rather than artificially shoving together bits of language (or worse, just lists of vocabulary!). We pair specific vocabulary with a grammatical topic so we can craft sentences that sound like real snippets of speech you'd hear out in the world. For instance, the grammar for asking questions might go well with a skill about shopping, so we can teach both together through sentences like “Could I buy these shoes, please?” and “Will this coat be on sale soon?” 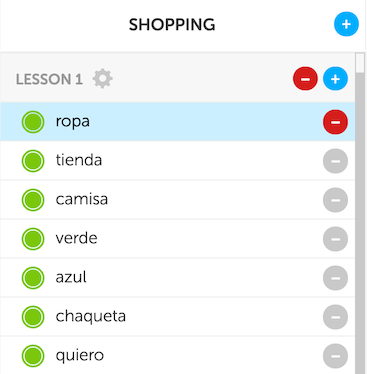 In the Spanish course, the first lesson in the Shopping skill introduces important vocabulary, covers color terms and where they go in a sentence, and teaches one of the most useful verb forms for shopping ("I want").

We also carefully study the research around how much a learner's brain can pay attention to in any given moment (answer: not much!). This is sometimes called processing load or cognitive load. So we're careful to find a balance between topic difficulty and ease of processing for your brain. To maintain this balance, we use both digital tools and human checks to ensure that we limit the amount of new material in a given sentence and skill. When we introduce learners to a new word or phrase, we make sure to build sentences that rely heavily on words and grammar that learners have previously seen, so they can focus their attention on just the little bit of new information. This is why, for instance, you might see different meanings for a single word taught gradually throughout the course, instead of all at once: we want to introduce one new meaning at a time to make it maximally comprehensible and to minimize the processing load.

What about when you update existing courses, like the German one?

When you align an existing course to the CEFR, do you also start from scratch?

Aligning an existing course to the CEFR often means totally restructuring it from the ground up. So in a way, we do start from scratch: we start with a blank page, and really try to get down to the basics of “What would a learner need to know first? If they were to do the first five skills of this German course and immediately chat with a German speaker, what would we want them to be able to say?” So this generally means massive changes to the curriculum.

Yet we don't entirely start from scratch. We use data from past versions of the course — like the sorts of grammar that gave learners difficulty, or particular sentences they struggled with — to help us improve the new version of the course we're building.

How do you know how to teach a particular concept?

How do you know what works, or what learners need?

Our Curriculum Designers and Content Developers have extensive training in foreign language pedagogy and years of classroom teaching experience. For example, we know how to contrast similar-yet-different structures to help learners tune in to grammar, and we know how to present new words in manageable chunks, so learners can better remember vocabulary. Figuring out how to teach on Duolingo requires a lot of flexibility and creativity, so our course designers know both the box and how to think outside of it!

We’ve also got some data up our sleeves to help us improve the way we teach. The castle Checkpoint Quizzes are short assessments, and they tell us a lot about how well we're teaching. So do our data on how often learners struggle with particular sentences and how quickly they complete each skill and section of the course. We also conduct user interviews — conversations with our learners! — to better understand our learners' needs and how they use all the different features available to them. 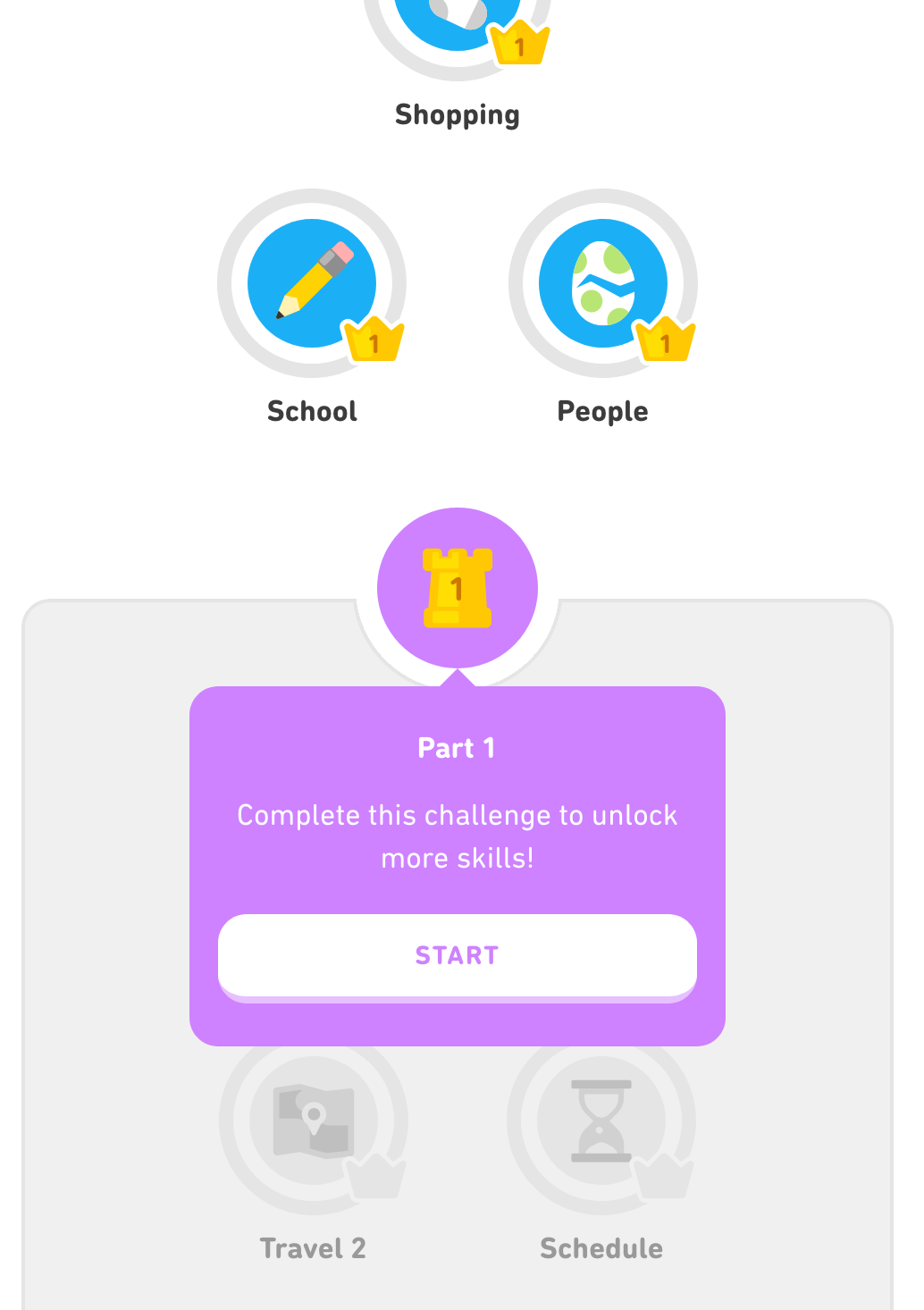 The Checkpoint Quizzes at each castle are really testing how well we're teaching!

Is it possible to translate a course to more languages?

Sometimes this can be done! For example, the course designed to teach English to Spanish speakers was adapted into a course teaching English to Portuguese speakers with only a few changes. This is because Spanish and Portuguese learners have similar types of language transfer.

Language transfer is, essentially, applying pre-existing knowledge from your first language to the new language you’re learning. Sometimes this knowledge can be really helpful. For instance, French speakers learning Spanish will find the concept of gender — why some words need el, others la — totally natural, since French has gender too. But when they run into a word like el carro ('the car'), which is the opposite gender of its French translation la voiture, pre-existing knowledge of French could make it harder to remember the gender of a word in Spanish.

Our courses are written to take language transfer into account. When we’re writing English for Spanish speakers, we can move quickly through certain concepts, like verb conjugations and when to use the. When we’re writing English for Chinese speakers — whose language doesn’t have a word for the! — we have to spend more time on the topics that will be new concepts for them. We might be able to use the same general progression of topics, but we might have to teach them at a different pace and with different strategies.

How long does it take to create a brand-new course on Duolingo?

It depends! Here are some of the most important factors for the timeline of a new course:

So how long are we actually talking? For a new course teaching a relatively similar language, made by our contributor community, with about 30 skills, we'll need 2,000+ sentences to teach the necessary words and grammar. But that's just the sentences we show learners — for each sentence, course creators also have to think of every possible translation a learner might submit and enter it in the system, too! All in all, creating content for half the A1 skills takes most contributor teams more than 9 months (longer than it takes to incubate a human!). 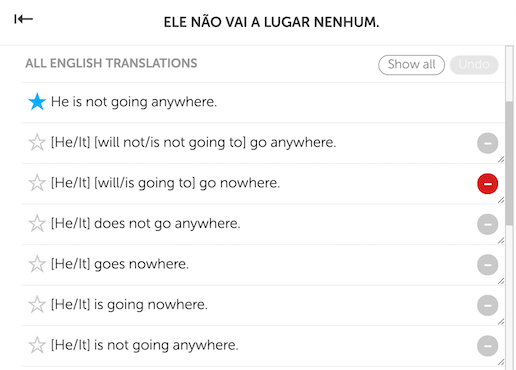 There can be dozens or even hundreds of possible translations for even a simple sentence (like the Portuguese "Ele nao vai a lugar nenhum")!

There are a couple of ways you can help us with this process! One way is by reporting errors and translations we should include, by clicking on the report flag at the bottom of each exercise. And if you want to help us improve an existing course or speed up the development of one that has not yet launched, apply to contribute here!

Our courses are thoughtfully designed by language teaching experts here at Duolingo and by talented language experts from the linguistic communities themselves: our course contributors. And the work is never finished, even after all those skills, sentences, and translations are programmed in. We work together to analyze learner data and user feedback to regularly update and improve the courses — and that's in addition to the new content we're constantly developing to extend our courses!

By combining research-based teaching techniques, years of classroom experience, and user feedback, we craft smart, practical courses that make language learning approachable and fun for everyone. Check out the Scope and Sequence documents for our Spanish, French, and English courses to learn more about what's happening behind the scenes of all those skills! 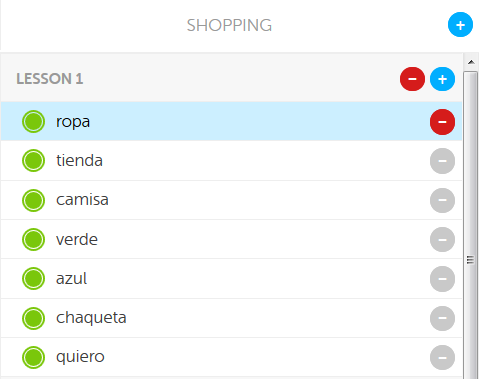 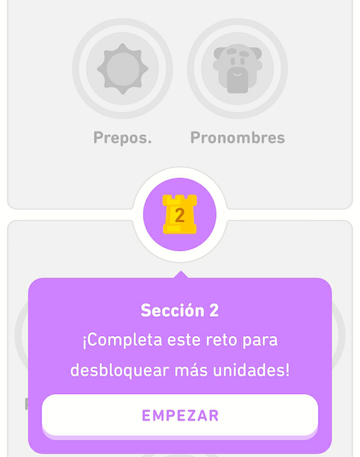 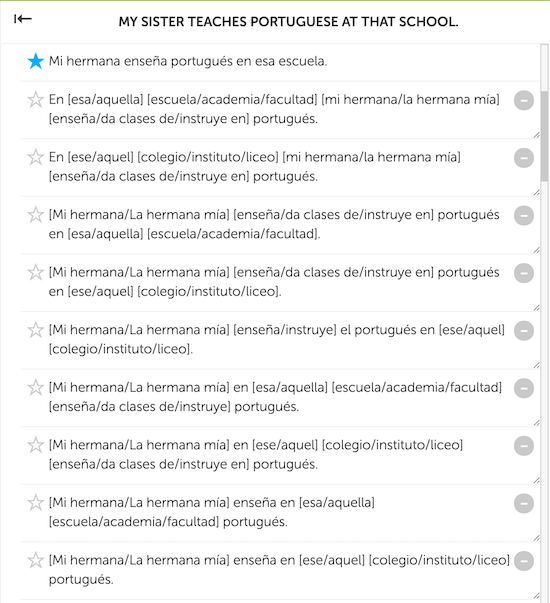