This data is from 2016. For the most recent global language data, see the 2021 Duolingo Language Report.

Millions of people around the globe are learning a foreign language — but why do countries prefer to learn some languages over others?

See if you can guess the following:

Confident in your answers? Keep reading to see how the data on Duolingo’s learners reveals insights into country preferences, cultural affinities, immigration trends, and more.

Using Duolingo data to find the most popular language

Duolingo has 120 million users around the world, and currently teaches 19 distinct languages.[1] The most popular courses are available for speakers of a variety of languages: for example, you can learn English from 21 different languages!

To find out which languages are the most popular around the globe, we looked at the daily activity of Duolingo users over a period of three months. The data covers all 194 countries. Figures 1 shows the most popular language studied on Duolingo in every country, and Figure 2 shows the second most popular.

Figure 1. The most popular language studied on Duolingo in each country. 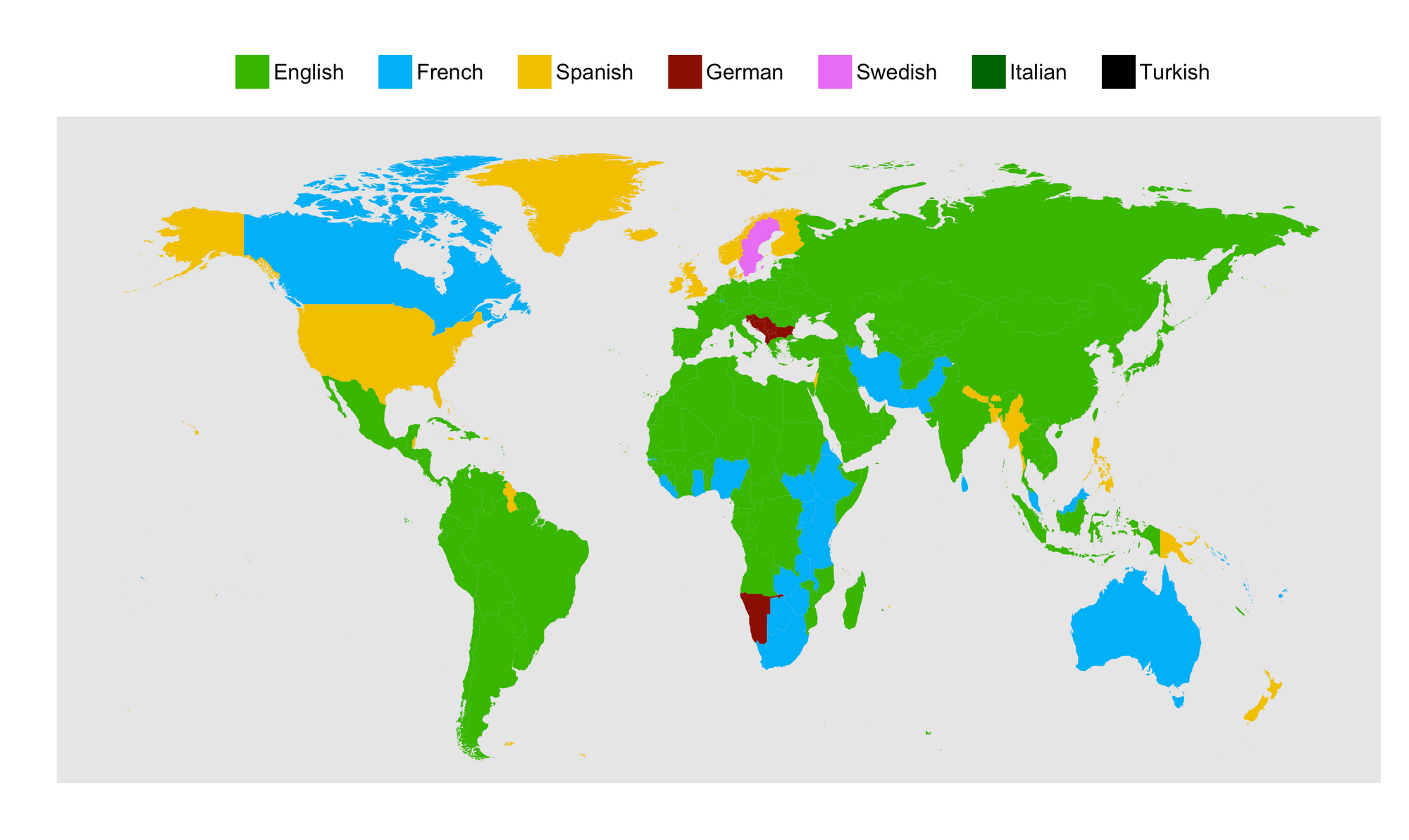 Figure 2. The second most popular language studied on Duolingo in each country. 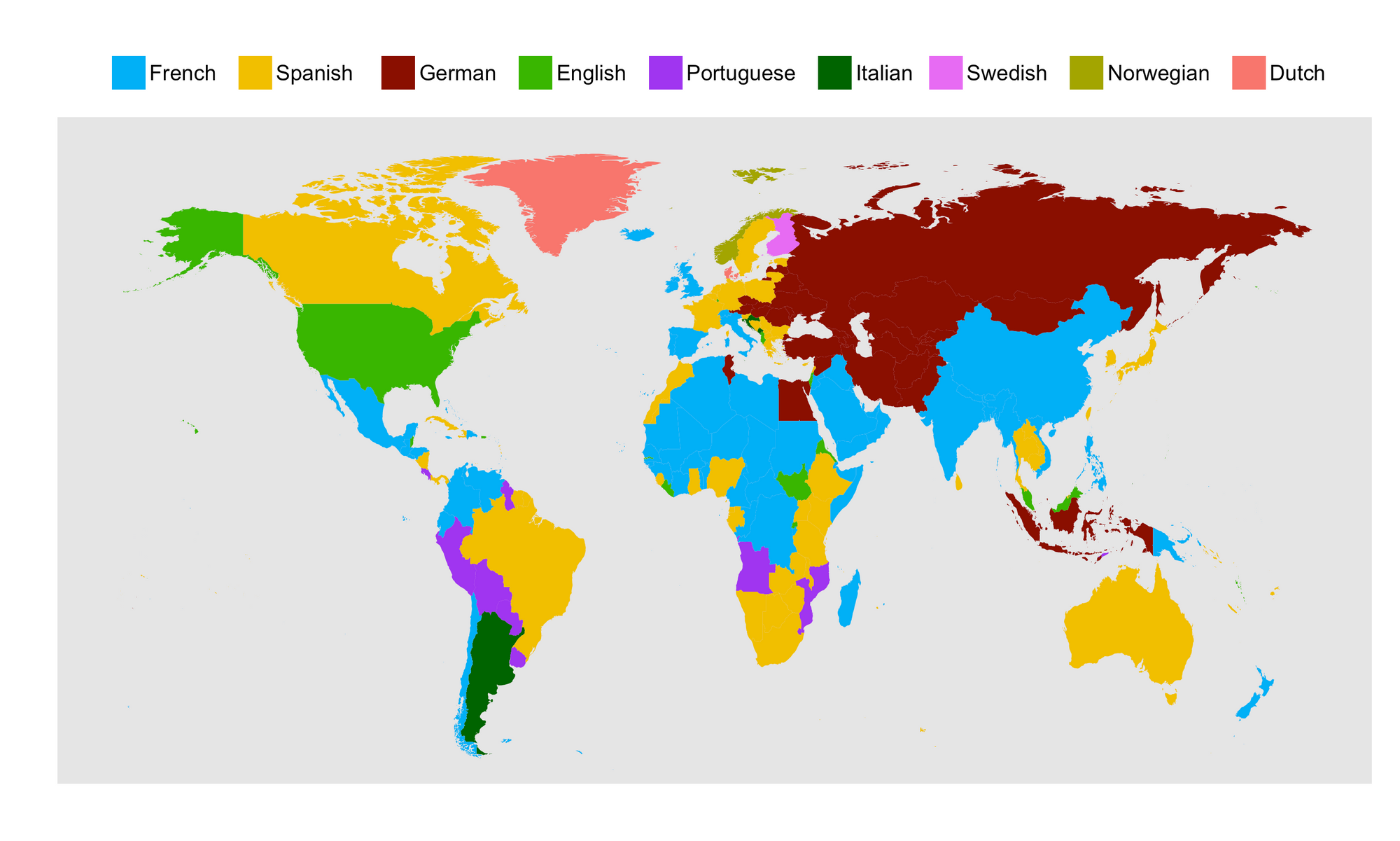 Yes, English dominates — but by how much?

As you may have guessed, English is by far the most studied language around the world: it’s one of the top two languages in two thirds of all countries. This is true even for English-speaking nations, such as the United States — we’ll come back to this finding later on![2]

But just how dominant is English? Figure 3 provides an illustration:
the darker the color, the higher the percentage of Duolingo users
learning English. Overall, it looks pretty dark! English attracts over
half of the users in 94 countries. The darkest regions are in Latin
America, Middle East, and Southeast Asia. English also emerges as the most popular when aggregating across all countries: it’s studied by 53% of all Duolingo users.

Figure 3. The percentage of Duolingo users learning English in each country.

Which languages are next in line?

French and Spanish are in tight competition: French is one of the top two languages in 58% of all countries, and Spanish — in 46% of the countries. But in terms of the overall number of users, Spanish wins: it is studied by 17% of all Duolingo users, compared to only 11% for French. French also has a bit of an unfair advantage in that it’s available on Duolingo from two more languages than Spanish is.

Figure 4. The percentage of Duolingo users learning French in each country.

Figure 5. The percentage of Duolingo users learning Spanish in each country.

Why is Swedish the top language in Sweden? 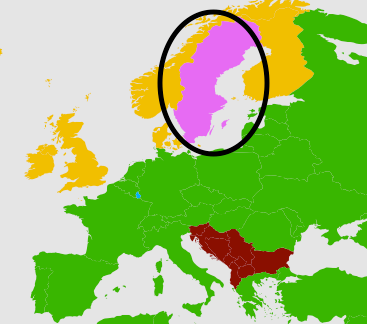 Duolingo’s Swedish course turns out to top the charts in Sweden itself: 27% of all users in Sweden are learning Swedish.

Why would that be the case? Immigration to Sweden has been skyrocketing in recent years: one in six Swedish residents in 2015 was born outside of Sweden. The fastest growing foreign-born groups are from Syria and Afghanistan, reflecting a recent increase in the refugee population. Duolingo recently released a Swedish course for Arabic speakers, which will hopefully help!

But it’s not just Sweden. There are several other countries where immigrants are using Duolingo to learn the language of their new home.

In the United States, immigrants constitute 13.1% of the total population. But even more — over 20% of the population — speak a language other than English at home, and over 25 million people speak English less than “Very Well”. Perhaps not surprisingly, then, English is the second most studied language in the United States, attracting 21% of the country’s Duolingo users. 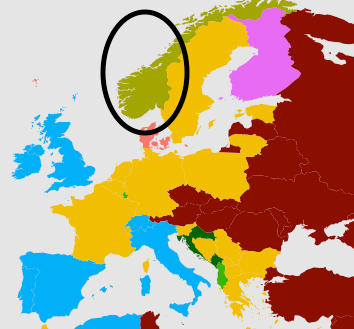 Another case is Norway, where Norwegian is the second most popular language (with 18% of all users). Similarly to Sweden, Norway has been recently accepting many migrants and refugees. According to the data from the beginning of the year, immigrants constitute 13.4% of the total population in Norway.

Who needs help with their country’s official language?

Duolingo not only helps immigrants, but also assists locals in learning an official language of their own country. 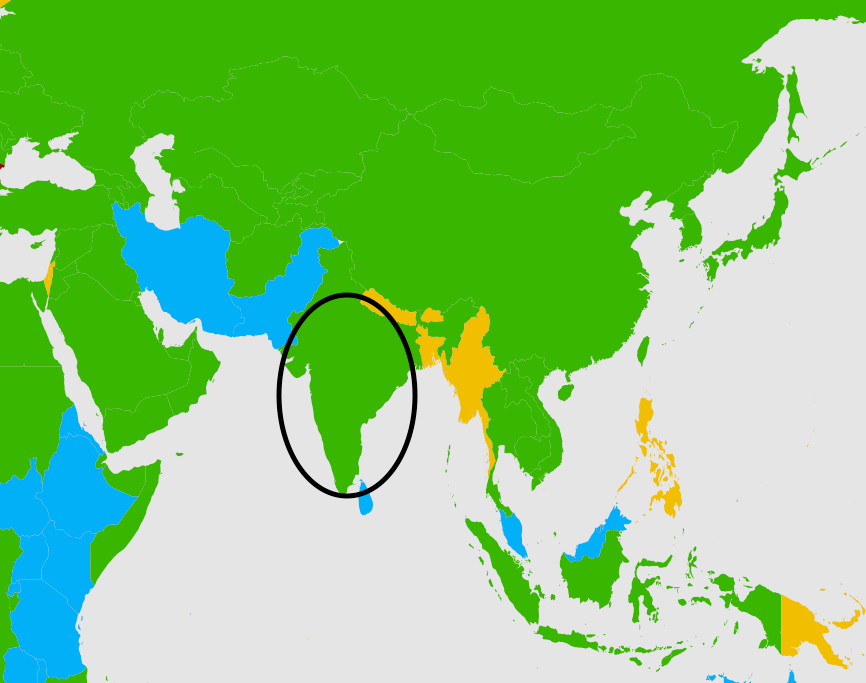 In India, English is one of the two official languages (together with Hindi), but it’s the top language studied on Duolingo; nearly a third of Duolingo users in India are learning English. Why? It may be surprising, but only about 10% of India’s population speaks English well. And yet, English is an unequivocally important language in that region. English is commonly used in higher education and administration, and some call it the "de facto national language of India". Those who don’t speak it have more limited access to jobs and basic services. 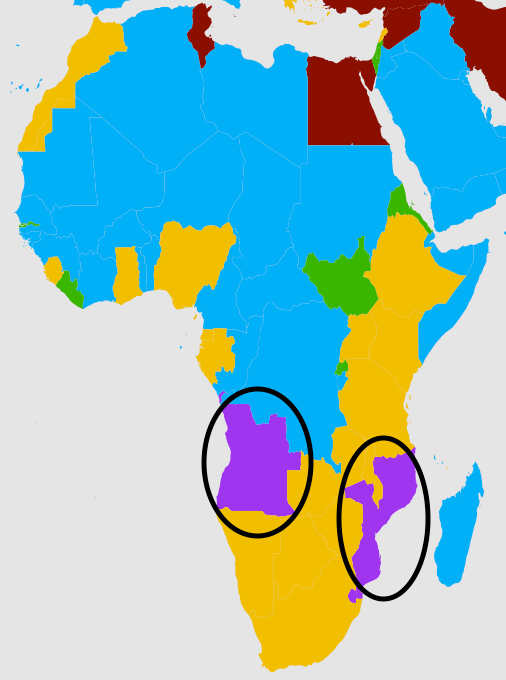 In other regions, the situation may be even more dire. In Angola and Mozambique, Portuguese is the only official language (since both countries used to be Portugal’s colonies). Yet, the knowledge of the language is limited among the natives: half of the population in Mozambique and 40% of the population in Angola don’t actually speak Portuguese. Luckily, Duolingo can help! And indeed, Portuguese is the second most popular Duolingo language in the two countries: 21% of users in Mozambique and 12% of users in Angola are learning Portuguese. The interest might be even higher, was it not for the fact that prior knowledge of either English or Spanish is required to study Portuguese on Duolingo.

Canada is another interesting case: its top language on Duolingo is French — one of Canada’s two official languages (in addition to English). But the status of French in Canada is very different from the status of English in India; most importantly, your socioeconomic status doesn’t depend on your French proficiency. French is spoken mostly in the region of Québec, where over half of the population speaks exclusively French, and the rest is mostly bilingual in English and French. The other parts of Canada are much less bilingual, even though French is mandatory as a second language for most Canadian students. Is this requirement the reason why a third of Duolingo users in Canada are learning French? Or is it because most Canadians truly want to learn their other official language?

How does Argentina differ from the rest of Latin America?

Latin American countries are fairly consistent in their language preferences: The top language is English, followed by Spanish in Portuguese-speaking Brazil and either French or Portuguese in Spanish-speaking countries.

But… there is an exception! 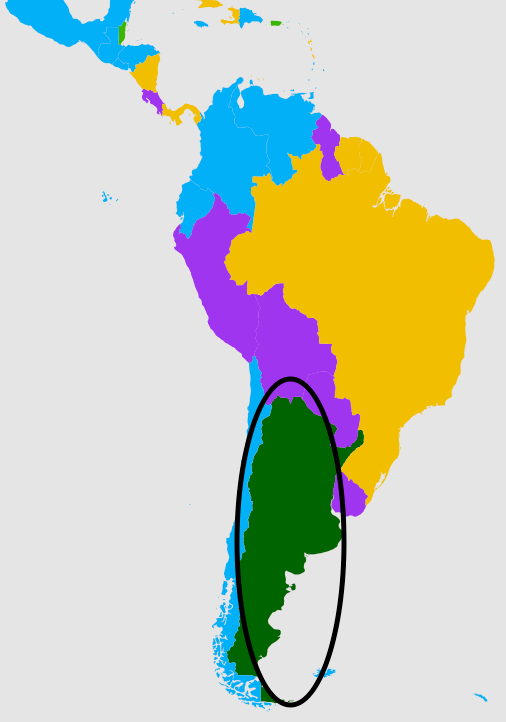 In Argentina, the second most popular language is actually Italian. 11% of Duolingo users in Argentina are learning Italian — over twice as many as those in neighboring countries (although Uruguay came close).

Why would Italian be so popular in Argentina? Argentina (similarly to Uruguay) has strong ties with the Italian language. In the 19th and 20th centuries, large waves of immigrants flowed from Italy to Argentina. Today, up to about 63% of the population has some degree of Italian descent. You might have heard that the current Pope Francis is from Argentina — but did you know that he was born to Italian immigrants?

Who’s learning to talk to their neighbors?

One reasonable approach for picking a language to learn is to go with a language spoken in your neighboring countries. Is there any evidence of people actually taking this approach?

Yes! For some countries, it happens to be one of the three top
languages on Duolingo: English, French, or Spanish. For example: 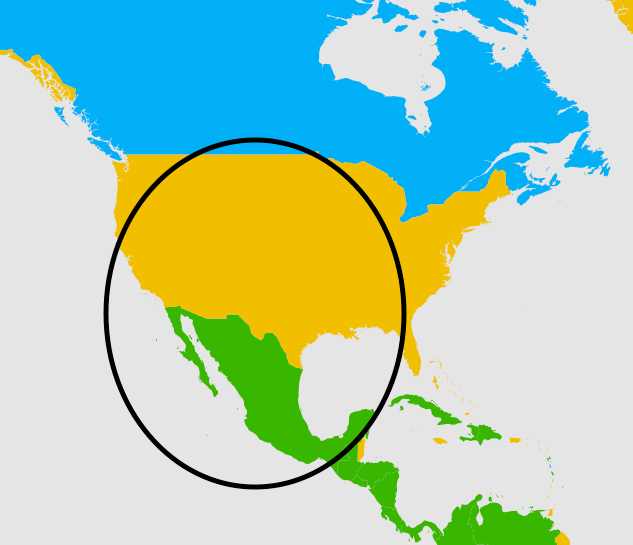 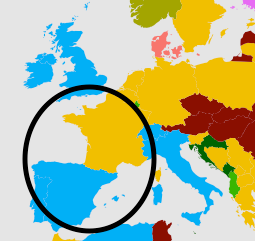 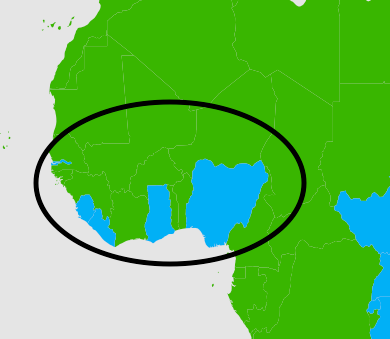 The above is indicative, but we cannot distinguish it from learners’ preference to study the world’s most popular languages. Luckily, there are other examples clearly driven by geographic proximity: 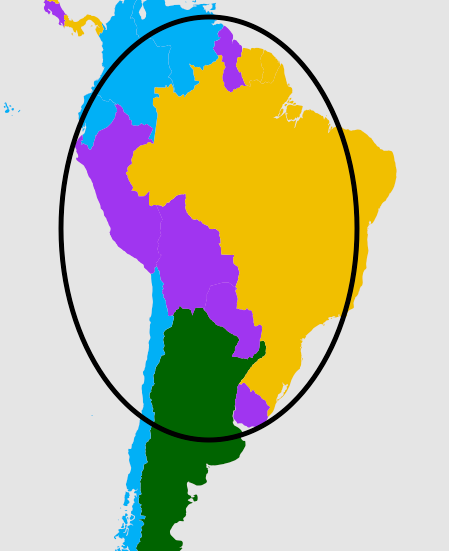 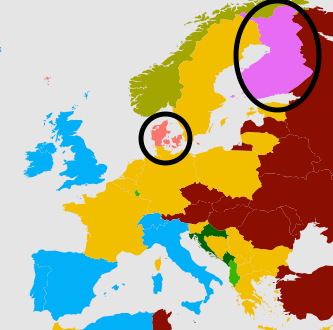 There are probably many other between-neighbor relationships that our data isn’t currently capturing. When Duolingo starts offering more courses — especially for different Asian and African languages — we might be able to see more!

Where are German learners?

German is the fourth most studied language on Duolingo. It’s one of the top two languages in 20% of all countries — largely focused in Europe, Middle East, and Asia — and it’s studied by 7% of all Duolingo users.

Which countries are the most interested in learning German? Below are a few examples from different parts of the world. 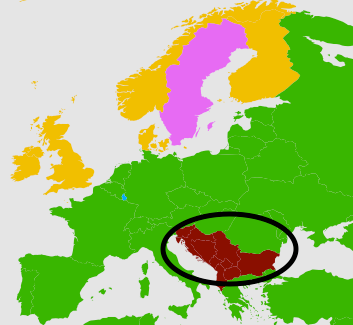 German tops the charts in Bosnia and Herzegovina, where it is studied by over half of Duolingo users. In fact, German is very popular in the whole region of the Balkans, which is geographically very close to German-speaking countries: Germany, Austria, and Switzerland. There’s a long history of close economic ties between Germany and the region (e.g., that’s where many of Germany’s guest workers came from after the World War II), which likely continue to this day. 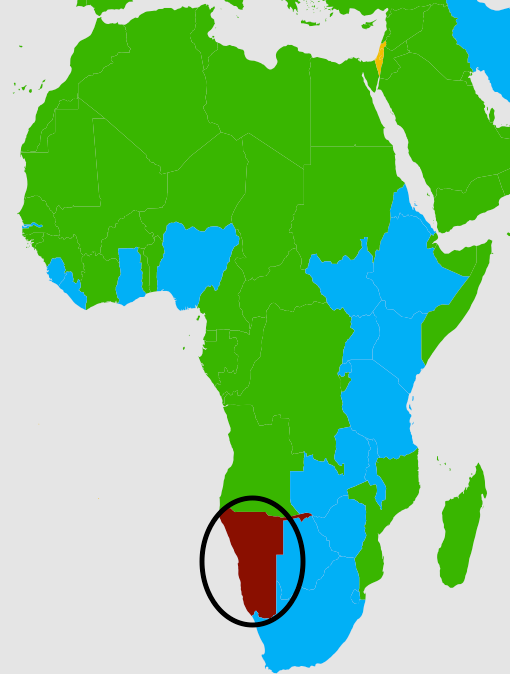 German is also popular in somewhat unexpected places. It’s the top language in Namibia, where it is studied by nearly a third of Duolingo users. Namibia’s relationship with Germany is complicated because of the colonial times, when Namibia was under German rule. German was one of Namibia’s official languages up till 1990, and is spoken by a third of Namibia’s white community.

German is also the second most popular language in Iran and Indonesia. As it turns out, Germany and Iran have invested in scientific and academic relations, and many Iranian scientists have been trained at German institutions. As for Indonesia, Germany is the country’s most popular study destination in Europe. There are currently almost 4,000 Indonesian students in Germany — an over 30% increase in the past four years. Even former president of Indonesia, B.J. Habibie, was educated in Germany. 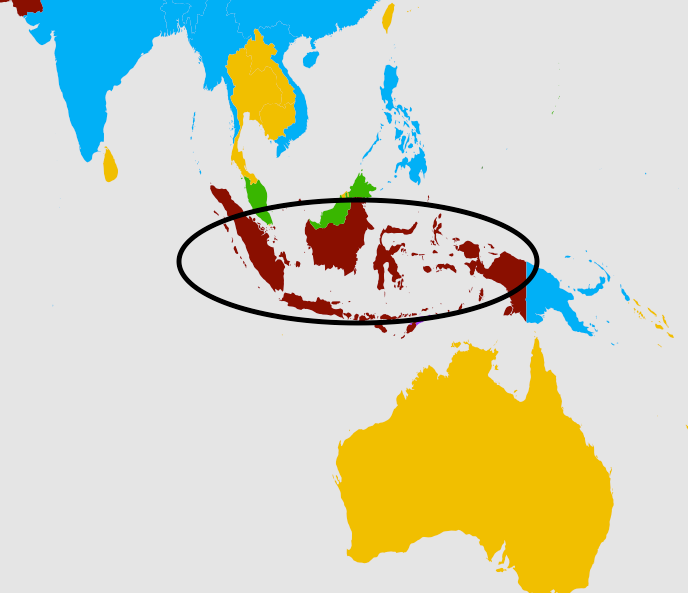