We love hearing real stories about how Duolingo helped learners reach their language goals. Whether it’s a successful trip abroad, to meeting new people, to developing a deeper appreciation for culture, everyone’s learning journey is different! And we were so excited to hear from a learner in Texas whose Duolingo lessons helped them get ahead in school!

Colton Holiday, 15, is a 10th grade student at Northland Christian School in Houston, TX. He picked up Duolingo during the onset of the COVID-19 pandemic and studied Spanish for fun. But due to the specifics of his class schedule, he was unable to take Spanish I alongside his friends, and was faced with the task of trying to test out of Spanish I so he could join his friends in Spanish II. 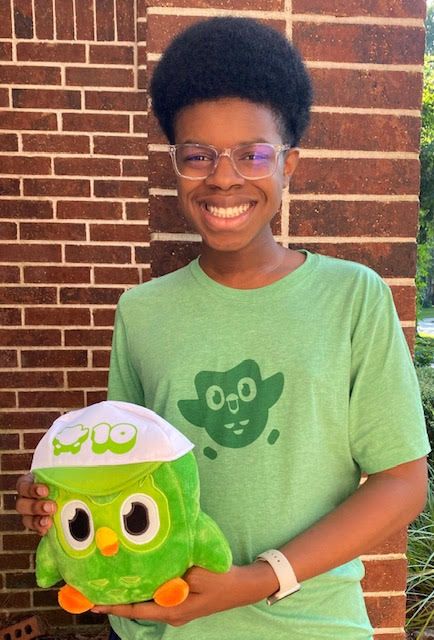 Given his consistent Duolingo use for two years, Colton was up for the challenge! He found out that he could get the necessary credits by taking the Credit by Examination (CBE) test, a 4-hour Spanish exam that covered writing and listening skills, as well as multiple-choice questions about the language. Despite never taking a formal Spanish course (remember, he wasn’t able to take the first level of Spanish!), Colton passed the exam and moved ahead to Spanish II! That’s right: Consistent practice allowed Colton to bypass an entire year of Spanish in school and place in the level appropriate to his skills.

Tell us more about why you started using Duolingo! Why did you choose Spanish, and what motivated you to stick with it?

I began using Duolingo because I saw an advertisement and knew it was free to use. Choosing Spanish was an easy decision for me because many people speak the language where I live in Houston.

My initial goal when downloading the app was just to take Spanish lessons during COVID. Then later, the fact that I could get one of my Spanish credits without taking Spanish I motivated me to continue studying with the app and that became my primary goal… to test out of the easier Spanish course.

What did you like about the learning experience? What was your favorite feature?

My favorite feature is definitely Duolingo Stories, because of how much the Stories simulate real-life.

What was your study schedule like? How much did you practice each day?

I would use the app on the ride to school (I wasn’t driving at the time). Then, after school, or whenever I had a break in my schedule, I’d spend that time in Duolingo. One of my favorite things about Duolingo is its accessibility. It doesn’t matter where I am, I can do a quick 15-minute Duolingo lesson.

How did you specifically study for the placement test? Did you use more than Duolingo to help study?

I specifically studied for the placement test (CBE) in two ways. First, I used Duolingo as much as I could to cover a range of topics. Second, when watching TV, I would put the captions in Spanish to, hopefully, build a larger vocabulary from what I had learned using Duolingo.

Who is your favorite character and why?

My favorite Duolingo character is definitely Lin. I love how adventurous and laid-back they are!

How do you use Duolingo now that you're in the new language class? Are you still using it for Spanish, or are you considering a new language?

Now that I’m in Spanish II, I do not use Duolingo as much as I did when studying for the CBE. But I am considering using Duolingo to learn a new language: French. I love how elegant and beautiful the language is!

Thanks, Colton, for sharing your story!

Want to hear from other Duolingo learners? Check out these inspiring stories!