When learning a language, you’ll definitely have to learn new vocabulary, grammar patterns, and pronunciations. In some cases, you might have to learn a new alphabet or writing system! Many languages use unique writing systems: for example, Ukrainian uses Cyrillic and Japanese uses kana. But today, we want to dive into the Korean writing system, Hangul (or Hangeul)!

Hangul has 24 letters, and the letters combine into syllable blocks, which we sometimes call characters. “Banana”, for example, has three syllables: ba-na-na. In Korean, this would be 바나나. Three syllables = three blocks!

This might be different from what you’re used to, but Duolingo has tools for learning new writing systems. Plus, we recently updated our Korean course to put more focus on everyday spoken Korean and additional practice with tricky concepts.

Whether you’re actively learning Korean or are simply interested in the language, here are five things every learner should know about Hangul:

1. Every letter only makes one sound*

*(There are a few exceptions, but we’ll save those for another time!)

Many people claim you can learn Hangul in one day. Maybe that’s a bit of an exaggeration, but the idea is, it’s pretty easy to memorize the sounds!

In English, the letter “a” sounds different in “father,” “about,” “age,” the list goes on and on. But that’s not a problem with Korean! Each letter only makes one sound. That “ah” sound is always written with “ㅏ,” and “ㅏ” is only pronounced like “ah.” Ahh, isn’t that nice?

Typing is a breeze, too! The Korean keyboard will stack the letters for you as you type in the letters. The layout is easy too: the consonants are on the left side, and the vowels are on the right side.

2. The consonants are based on the shape of your tongue

This is tougher to actually see, but trust the experts on this one: the consonants in the Hangul alphabet were drawn to mimic the shape of the tongue when pronouncing them. How cool is that?

3. Hangul was created to improve literacy

Hangul was created in the 1400’s by King Sejong, the fourth king of the Joseon Dynasty. Back then, Chinese characters were used to write Korean. But not only were the Chinese characters difficult to learn, they didn’t even match up with how people actually spoke. King Sejong wanted a better system specifically for Korean, which would boost literacy and let more people do tasks like filing claims, writing letters, or keeping records.

4. The characters used to be written from top to bottom 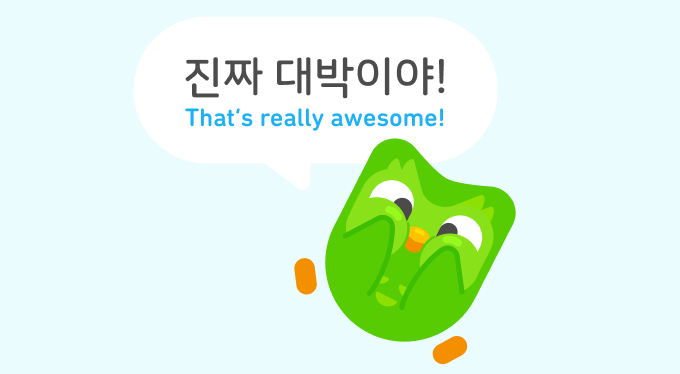 The alphabet is so beloved that South Korea takes a day off for Hangul Day every year on October 9th. That day was chosen because that’s when the document of this rad new writing system (known as the Hunminjeongeum) was officially published in 1446. Five centuries later, it still holds up!

So what are you waiting for?

Duolingo’s Korean course is the fourth most popular language for English speakers. And we’ve recently made some improvements to the course, so go check it out! You can even start with the tab that says 한 to do our specialized lessons that teach you how to read and write Hangul.

Note: Notice two different ways to spell Hangul? Hangeul is the officially recognized spelling by the National Institute of Korean Language (this is what you'll see in our course), but Hangul has become the more popular spelling, and what many learners (old and new) may be familiar with.