The 2021 Duolingo Language Report presents the latest language trends and learner behaviors based on data from over 500 million Duolingo learners around the globe. Duolingo is the world's most downloaded education app, and we offer over 100 courses teaching 40 languages—all for free. As a result, our data offers unique insights into what languages learners worldwide want to study and how their interests change over time and geography.

The results of the 2021 Duolingo Language Report clearly show that learners continue to turn to languages to build bridges with cultures and people, across distances we can't quite traverse in person—yet.

For learners around the world, 2021 wasn't the return-to-normal we had been envisioning since the start of the COVID-19 pandemic. It's no surprise that Duolingo's Most 2021 Phrase was "I am mentally exhausted." Much of the globe continued to cycle through stay-at-home orders, delayed return-to-office plans, and ever-changing health policies—but the year was not without bright spots, including vaccines, the Olympics and UEFA Euro tournament, and plenty of captivating TV.

And for millions of people, language learning was another bright spot. In 2020, the Duolingo Language Report noted record growth of new learners who started studying a language during the pandemic, whether to keep up with schoolwork or connect with people around the world. This year's report investigates how those patterns have evolved in 2021. 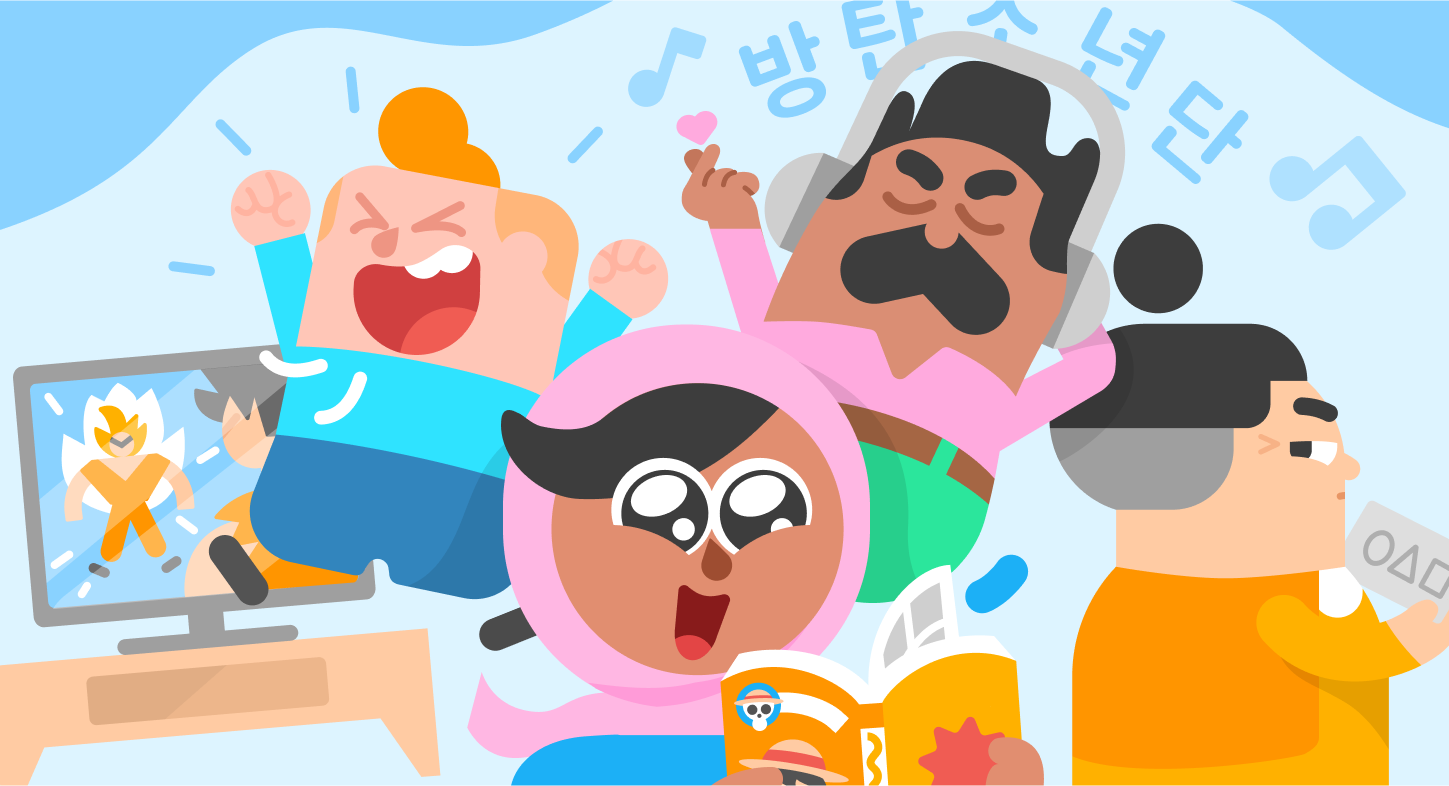 Love for Asian languages continues to grow around the globe

In 2021, Asian languages—especially Japanese and Korean—attracted learners worldwide, building on the impressive growth observed in 2020.

The growth of interest in studying Asian languages shows no signs of slowing. The world is tuning in to more Korean and Japanese entertainment, listening to more K-pop, and reframing language study as something you do to complement and support your interests and other activities—not just something required of you in a classroom.

Learners around the world want to study a wider variety of languages than have traditionally been available to them. School districts and universities may be slashing language courses and funding, but our data shows that learners are more interested in studying languages for personal, cultural, and entertainment reasons—which has led them to study more diverse languages.

English, Spanish, and French remain the most popular languages to study globally, but when we look at the languages studied in individual countries, we see that more languages than ever before have reached the #1 spot: in 2021, 10 languages made the list of most popular to study by country, up from 8 languages in 2020 and 7 in 2016. 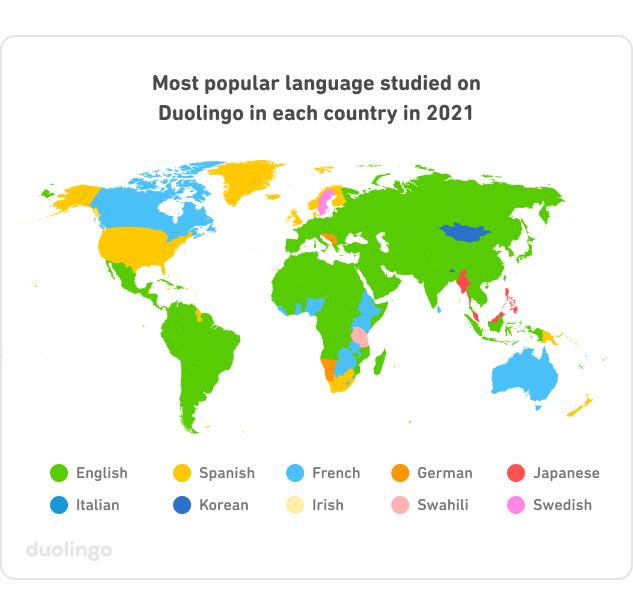 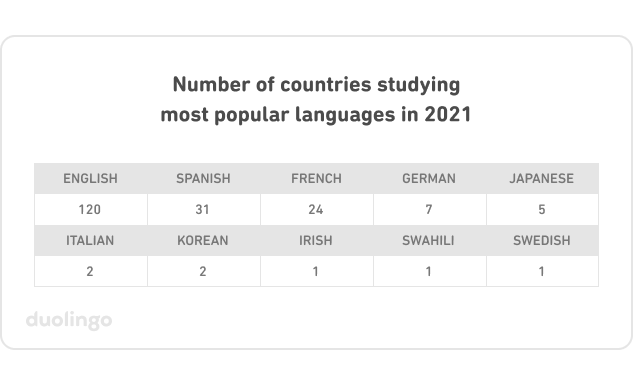 The languages occupying the #2 spot in each country are also becoming increasingly diverse: this year, old favorites like French, Spanish, and German are joined by two new additions to this list: Finnish and Guaraní. Finnish has become the second most popular language to study in Finland, and similarly Guaraní, an indigenous language from South America, is now the #2 language studied in Paraguay, where it is an official language. While school, family, and friends are top reasons for these Finnish and Guaraní learners, the second most common reason for learning the language indicates some differences in these groups. Finnish learners in Finland study more for work, which could mean they are likely non-Finns working in Finland. Guaraní learners in Paraguay are more motivated by culture (they are probably the ~20% of Paraguayans who don't already speak Guaraní or may be non-Paraguayans now living in Paraguay.) 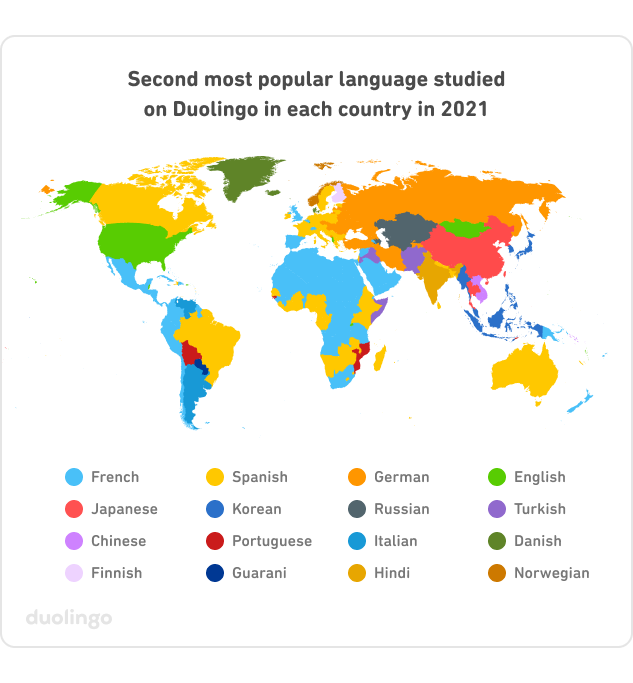 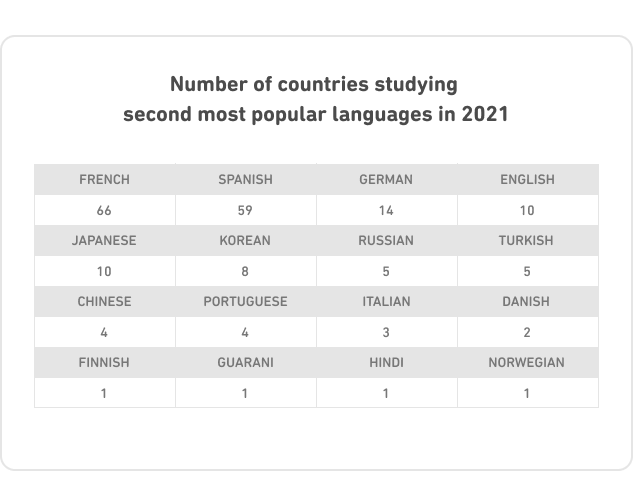 COVID-19 continues to stifle travel plans in most parts of the world, so learners are thinking less about languages to use on the road and instead are studying for reasons closer to home: to connect with the family, friends, and cultures that have kept them going through nearly two years of pandemic precautions.

U.S. and French learners are examples of this global trend. In just one year, family has overtaken school and brain training to become the top motivator for new U.S. learners. For French learners, culture and family have both grown as reasons to study, while travel continues to be grounded. On the other hand, Mexico and Brazil stand out as places where interest in languages for travel has seen a slight increase, suggesting that learners in these countries are ready to start thinking about traveling abroad.

The importance of family and culture for U.S. language learners was echoed in a recent national consumer survey Duolingo conducted in collaboration with DKC Analytics. Across all respondents, including those not currently learning a language, 65% said learning about a new culture would be their top reason for studying a new language—and culture ranked ahead of all other potential motivators.

Of those respondents who had started learning a language during the pandemic, 70% say their learning is related to family heritage, ancestry, or culture. In fact, 94% of learners whose family language is endangered, indigenous, or otherwise under-studied said they would be interested (or very interested!) in learning that language. Data from learners on Duolingo supports this finding: when learners have access to more diverse course offerings, including less-commonly studied languages that better represent their interests, families, and communities, people are excited to start studying a language.

Language learning highlights from around the world

There's even more to uncover in our data about how interests in languages grow and change over time. Below are some other notable findings from around the world.

About the data
The 2021 Duolingo Language Report includes information about learners who studied languages on Duolingo between October 1, 2020 and September 30, 2021. The data was aggregated by country or by language to ensure learner privacy. Country aggregations are based on internationally-recognized, independent, self-governing entities as outlined here. Also to the end of protecting learner privacy, rankings exclude countries where there are fewer than 5,000 Duolingo learners.