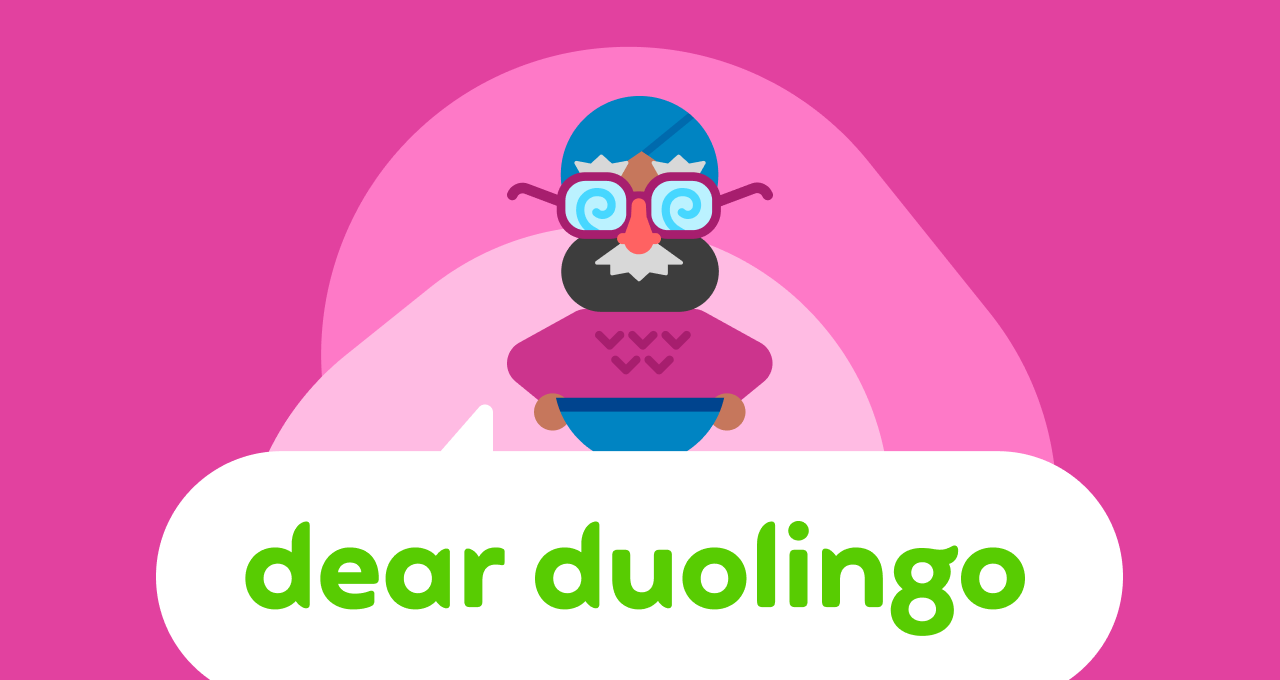 Happy 2023, learners! Whether you plan to start studying a new language, level up your skills in a language you've studied for a while, or simply indulge your inner language nerd, you've come to the right place! We're kicking off the new year with a question we've heard from many learners, about a lot of different aspects of language. Is this one you've wondered about, too?

As a native Spanish speaker, I’ve found it especially challenging to learn other Romance languages (like Italian and Brazilian Portuguese) because I unconsciously apply Spanish grammar to them (like rules about verbs and word order).

What is the science behind why my wires are getting crossed? Would it have been better to learn a more dissimilar language?

Thank you, muito!
Crossing the Line(s)

I love how you're thinking about this, Crossing the Line(s)—and actually, you've rolled many questions into one! To answer your email, we'll talk a bit about language and the brain, a fascinating process called L1 transfer, and similarities and differences across languages.

The short answer to your question is that learning a language pretty different from your own might reduce some of the unconscious grammar application you're talking about… but it wouldn't avoid it entirely! And actually, you might not want to cut it out completely. That unconscious application ends up being helpful for learners!

When you learn a language, you're learning new vocabulary, pronunciation, grammar, and conversation rules for it. And for any pair of languages, there will be some parts that overlap more than others, like there could be a lot of vocabulary in common but very different grammar or sounds in each language. (That's the case for French and English, for example!)

Not to mention your two languages will also overlap in your brain. Let's take a closer look.

How your brain makes language connections

One way to think of language in the brain is as a complex system of connections. A meaning (like an idea or concept) is connected to a word, which is connected to its pronunciation. A word is also connected to other words and phrases it's often used with or that you associate with the word, and it can be connected to lots of other language information, like the letters or characters for writing it.

For example, in English, we learn connections between this little animal 🐈 and:

The more you practice a connection, the stronger it gets. That practice could be by seeing the word written out, using it in conversation, writing it out, reading all about 🐈, listening to a podcast about them, etc. If English is your first language, you made some of these connections at a baby (like connecting 🐈 and the sounds k + æ + t), but you made others when you were older (like when you learned about lions and tigers, and when you first adopted your own 🐈 as an adult)

For words you know well—like those in your first language, especially common words you use all the time—the connections are really strong. You've been strengthening them for years, probably decades, like tiny muscles in your brain. So when you learn a new word in a new language, it's only natural that we rely on that super strong connection first: We sort of translate in our head, going from 🐈 → word in first language → word in second language, instead of making a connection right to the meaning. But the goal of learning is to make that more direct connection, through practice! 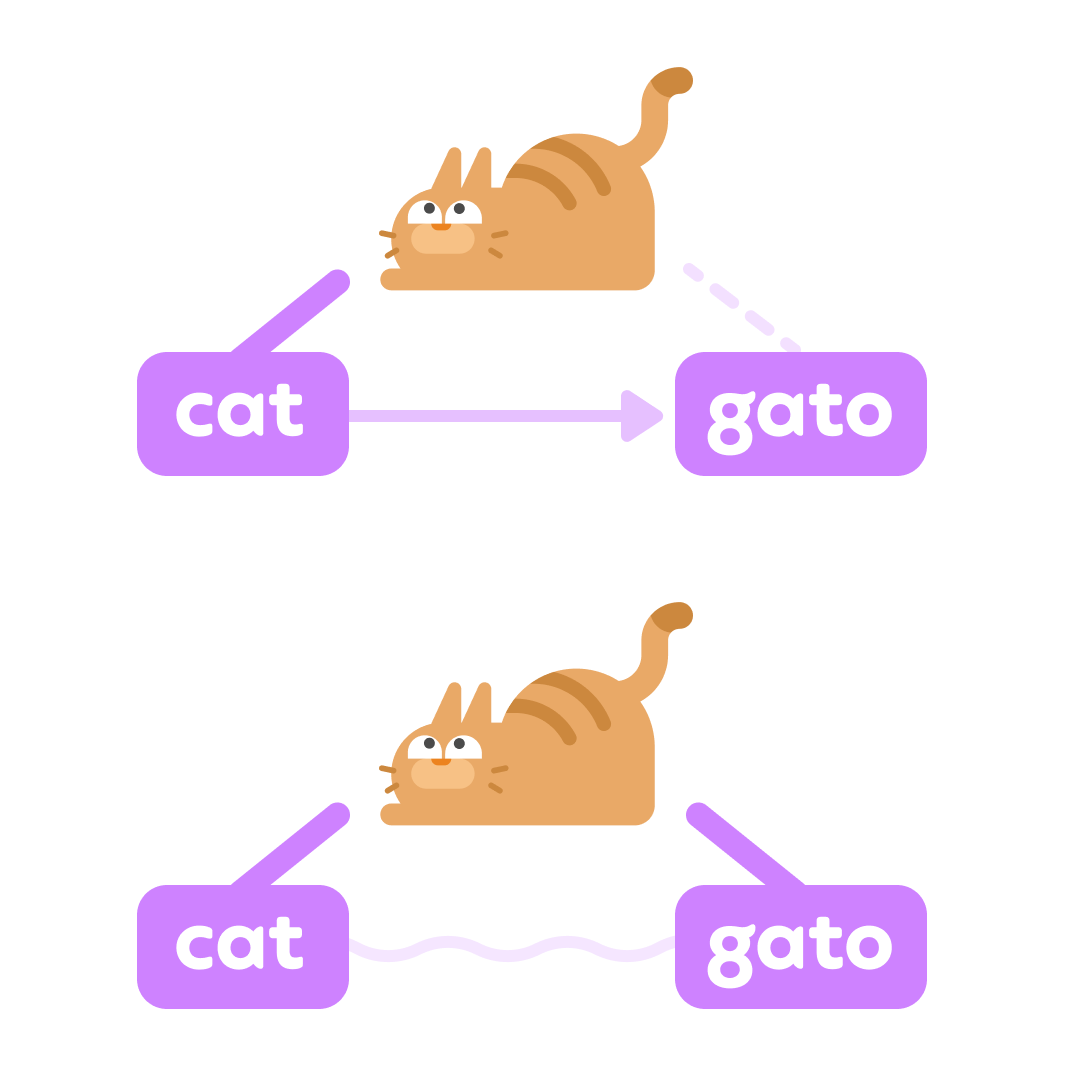 Most of this is the same when it comes to grammar, too. The meanings and concepts are sometimes more abstract than 🐈 (like "past tense" or "express affection"), but you can imagine how connections in your brain for certain verb tenses might be stronger or weaker depending on how well you know them, and you can probably feel yourself doing that translate-in-your-head for them, too!

"Transferring" grammar from your first language

So now with that information—you've built really strong connections in your first language—we can get to Crossing the Line(s)'s real question: why do we apply rules from our first language to new languages we're learning?

When you want to say something in a language, your brain starts by "activating" (lighting up) the idea or concept that you want to express (✨🐈 ✨). And if you know multiple languages, that means multiple words or phrases also light up! (✨ cat ✨ gato ✨ ) Dr. Neil Kirk makes the useful analogy to volume controls: All of your languages always have the volume on, and using just one language at a time means you have to turn one volume control way up and the other way down. Your first language, with all those really strong connections, has its default volume set really high. It takes a lot of mental effort to turn your first language volume down so you can use a second language!

For recently-learned words or grammar, it's easy for your brain to pick the stronger language connection—the language with the volume turned up—and transfer that information from your first language to the second language. You might hear this called L1 (first language) transfer.

This is especially true when there are other connections between the languages, besides just residing together cozily in your brain. For example, Spanish and Portuguese are closely related Romance languages that share lots of cognates, words that have similar pronunciations and the same meaning. Those cognates are connected by their sounds and meanings, so they keep the volume of both languages turned up! Spanish and Portuguese do also share a lot of grammar, too, so it definitely takes practice to turn the volumes of these languages up and down, depending on which one you need.

Can you avoid transferring from your first language?

Crossing the Line(s) also asked if learning a more different language would keep you from doing this L1 transfer in your new language. It would help with some aspects, but it wouldn't help completely or across the board.

That's because even distantly related languages (like English and Russian, or Spanish and Hindi), and languages that are totally unrelated (like French and Chinese, or Japanese and German), will still share connections! You might still find cognates, either because the languages were in contact at some point or because they've both borrowed from another language (like English), and accidental false cognates create connections, too—because they share sounds.

Transferring from your first language can actually help you recognize patterns in your new language. When you learned your first language long ago, you had to figure out everything: that objects have names (like "cat"), that there are exceptions to rules (for past tense, we say walked but not teached), that some things are ok to say to your friends but not to your grandparents 😅 But as an adult learner, you can transfer a lot of that knowledge to get a headstart on your new language! You transfer the expectation that there will be a name for animals like 🐈 and that there will be a different name for 🐶, you know there will be exceptions to rules, etc. And the more languages you learn, the better you're able to expect and learn different kinds of patterns!

That'll be true whether the language you're learning is similar or different from your own, but for related languages like Spanish and Portuguese, you can also use that L1 transfer to make good guesses about the new language. If you have noticed that a lot of Spanish words that end in -ción end with -ção in Portuguese, you can use that rule to guess new words in Portuguese, even if you haven't learned them before.

Fear not: Your brain is wired for learning!

Using your first language in your second language is a totally normal and expected part of language learning—and it's not all bad! Our brains link our languages together, and we can't help but rely on the strongest connections to express ourselves efficiently and effectively. That's why continued practice is so important for learning, but remember to make your goal successful communication: There's no need to sound like a monolingual in your new language, because your brain is doing something much more interesting!

For more answers to your language and learning questions, get in touch with us by emailing dearduolingo@duolingo.com.