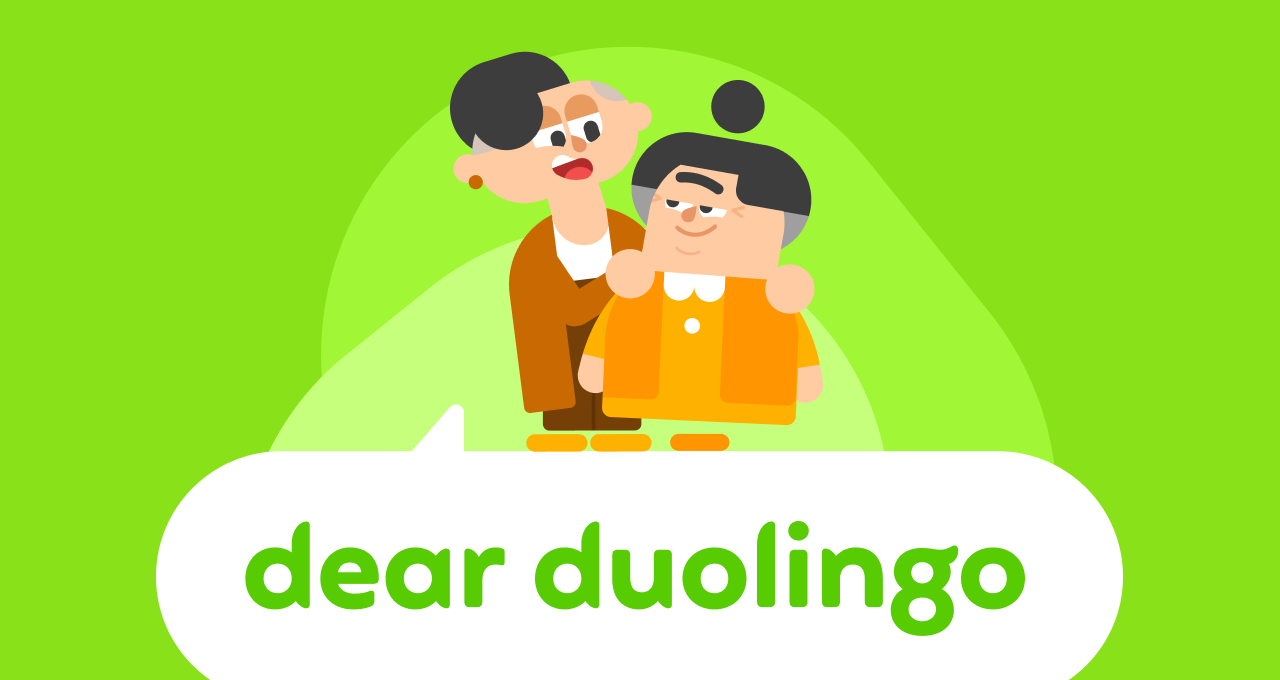 Hello, learners! It has been so fun reading all of your thoughtful questions in our Dear Duolingo inbox, so keep ‘em coming! I particularly love when somebody’s question was inspired by a previous column, which is the case this week! Let’s dive right in:

I really loved the post on what languages people study in different states across the U.S., and it got me thinking about other differences in who studies what languages. For example, I’m studying Korean on Duolingo, and my mom is sticking to Spanish. Do you notice any cool trends across generations studying different languages?

This is a great question! If you've recently been on Facebook, TikTok, or in a family group chat, you've seen for yourself how different a single language can be across the generations. How we use language is a reflection of all the different facets of our identity, including our age!

There are also differences in the languages people study depending on their age group. We've previously reported that Asian languages, especially Japanese and Korean, are especially popular among Gen Z learners, particularly because younger people use language study to connect to their other interests, like culture and movies. How different are the generations when it comes to language learning? What do these trends look like around the world?

There are big differences in which languages people of different generations are interested in studying. In the U.S., the only thing all the generations have in common is that Spanish is the most popular language to study; after that, the variation in our cultural, entertainment, and travel interests are clear. One of the most interesting trends: Gen Z learners tend to study Japanese, while their parents and grandparents study Italian!

Japanese is the 3rd most popular language for learners ages 13-22 to study. It drops a bit for older age groups, and for learners 40 and up, Japanese is ranked a distant 6th in popularity. Korean follows a similar pattern: its popularity peaks at #6 for 13- to 17-year-olds, and gets less popular for older learners. (For those over 60, it doesn't break into the top 10!) 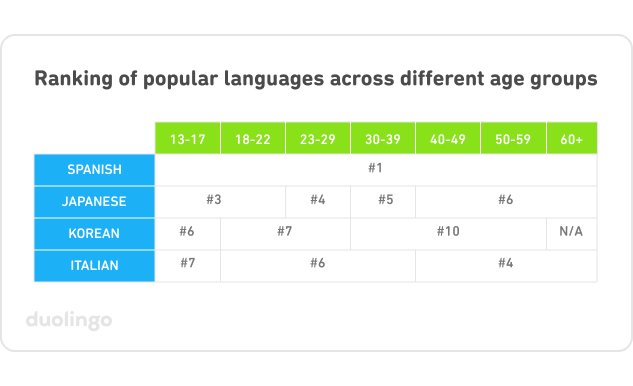 Italian shows the opposite pattern of Japanese and Korean: its popularity increases among older learners. Italian starts as #7 among the 13-17 group, is #6 for learners 18-39, and jumps to #4 for learners 40 and up. The motivations for Italian learners in the U.S. also look really unlike other languages: travel (22%) and brain training (17%) top the list of motivators, while school and work are the least common motivations for Italian learners.

In the U.S., Gen Z drives interest in learning languages

Young people, especially Gen Z, are really interested in language learning! About 60% of U.S. learners are under 30. Fewer older Americans are studying languages, and there is a big decline between 30-something learners and 40-something learners. But it's never too late to start learning a language! For adult learners – whether college-aged Gen Z, elder Millennials, or retired Boomers – the hardest part of language learning is sticking with it and getting enough practice. But our brains are built for learning languages! 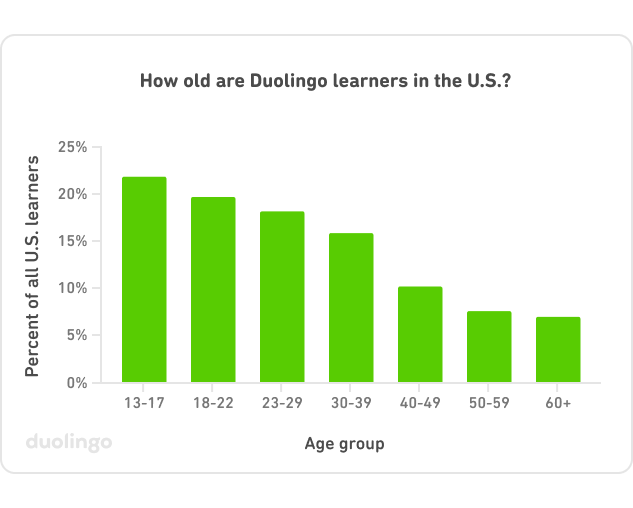 And around the globe, young people are passionate about language learning!

The influence of young learners isn't unique to the U.S.: in fact, in many countries around the world, people under 30 make up about 60% of all language learners. We see this general pattern in countries as geographically, culturally (and linguistically!) diverse as Brazil, Japan, Mexico, and the U.S.

Young learners see language learning as a tool to build and maintain connections with the family, culture, and media they care about the most. This is true on a global scale, as well, according to the 2021 Duolingo Language Report. Technology has made it much easier to learn new languages, people can use language learning to complement new interests - like learning some basic Korean while they watch Squid Game and showing empathy and support for Ukrainians by studying their language. 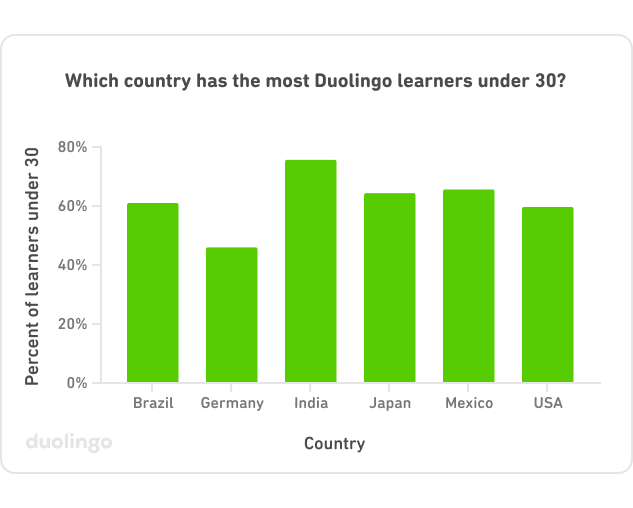 But there are many cultural differences when it comes to language study, too

While the overall percent of young learners doesn't vary much across the globe, there are some notable differences when we look a little closer. Language learning is especially popular among young learners in Japan and India, while in Germany everyone studies languages. 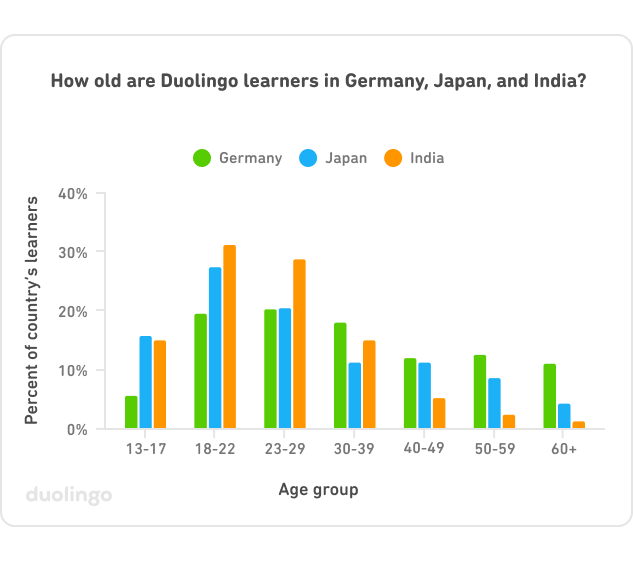 Learners in India are among the youngest, with over 75% under the age of 30

Language learning in India is driven by people 18-29, with fewer teenagers studying new languages, and the overall numbers dropping off quite a bit after age 30. This pattern is pretty different from the U.S., for example, where learners 13-17 make up 22% of all learners in the country.

The pattern in Japan looks more like the Indian pattern than the U.S. pattern: the largest age-group of learners is 18-22. However, in Japan, there are fewer teenagers and post-college learners studying languages. Unlike in other countries, language learning is pretty consistent in Japan for learners 30 and up, and there isn't a dramatic decline for older age groups like we see in other places.

Language learning in Germany stands out because one group doesn't dominate the linguistic landscape; instead, Germans of all ages are learning languages! Learners are pretty evenly distributed across the different age groups, with 36% of learners ages 40 and up. Only 46% of German learners are under 30, which is lower than we see in other countries, because so many German Millennials, Gen X, Boomers, and beyond are learning languages!

Learners of all ages make a really personal decision when they decide what language to study, and those decisions are influenced by our age group, too! We share many experiences, interests, and favorite movies and TV with our generation, so it's no surprise that different age groups are attracted to different languages.

Have another question? Don't forget to reach out at dearduolingo@duolingo.com or tag us on social media at @Duolingo using the hashtag #DearDuolingo!