Earlier this year, I planned a trip to Italy and studied Italian for 4 months to prepare. It was great! I had lots of meaningful conversations, confidently navigated cities and towns in the countryside, and successfully ordered what I intended, every single time. 💯

But this time was different: I made plans to go to Germany for work, which was exciting except… I didn’t know any German! I've never studied it, everything I know comes from "99 Luftballons," and when I went to Germany in 2008 (pre-Duolingo days), I learned the word for "once" and mistakenly used it in coffee shops across Berlin (einmal croissant, einmal coffee, "once croissant, once coffee"). Ack. 🎈

This time, I used Duolingo to prepare—and I only have 4 weeks! Here's how I prepared for my trip and how it went. Maybe it'll give you ideas of how to prepare for your own trip, especially if you only have a few weeks!

Setting goals for myself

Setting clear goals was important for staying motivated and keeping my learning on track, and it helped me be realistic about what I could accomplish in just 4 weeks. After a month, I was still going to be a beginner—definitely at the A1 level in the international language proficiency scale we use at Duolingo (the CEFR)—so here were my specific, personal language-learning goals for German:

I could see that Unit 1 ("Order in a cafe, describe your family") is shorter than the others, and I know that Duolingo scaffolds lessons, so they'll gradually build on each other. I planned to work on regular lessons, the Stories that are mixed into the path, Legendary Levels, and the Practice Hub. I also resolved to mix up my practice with new side quests—these are lessons that you complete to earn stars under the Duolingo characters playing on either side of the path. They're timed, so they are a fun challenge, and they review material from the regular lessons.

I only had four weeks, so I focused on only what I needed to accomplish my goals. I consulted the titles and guidebooks at the top of each Unit to see what would be covered, so my goal was to get through Unit 7.

Since I didn't have much time before my trip, I was pretty serious about my study routine. It helped that many other parts of my day were focused on Germany, too, like my tasks at work and figuring out what to pack (for me: long underwear).

Here's how I studied: 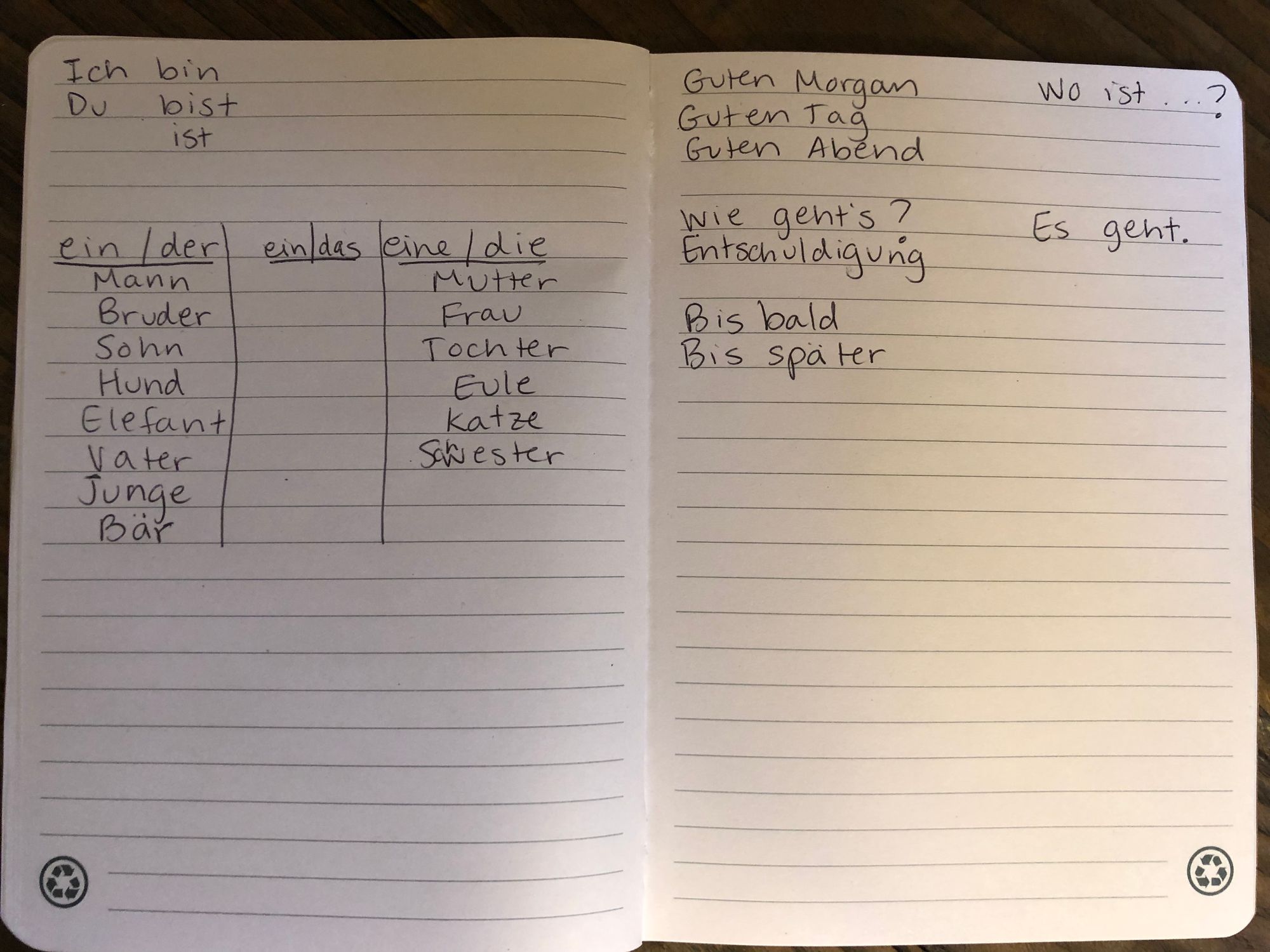 My notebook after Week 1! 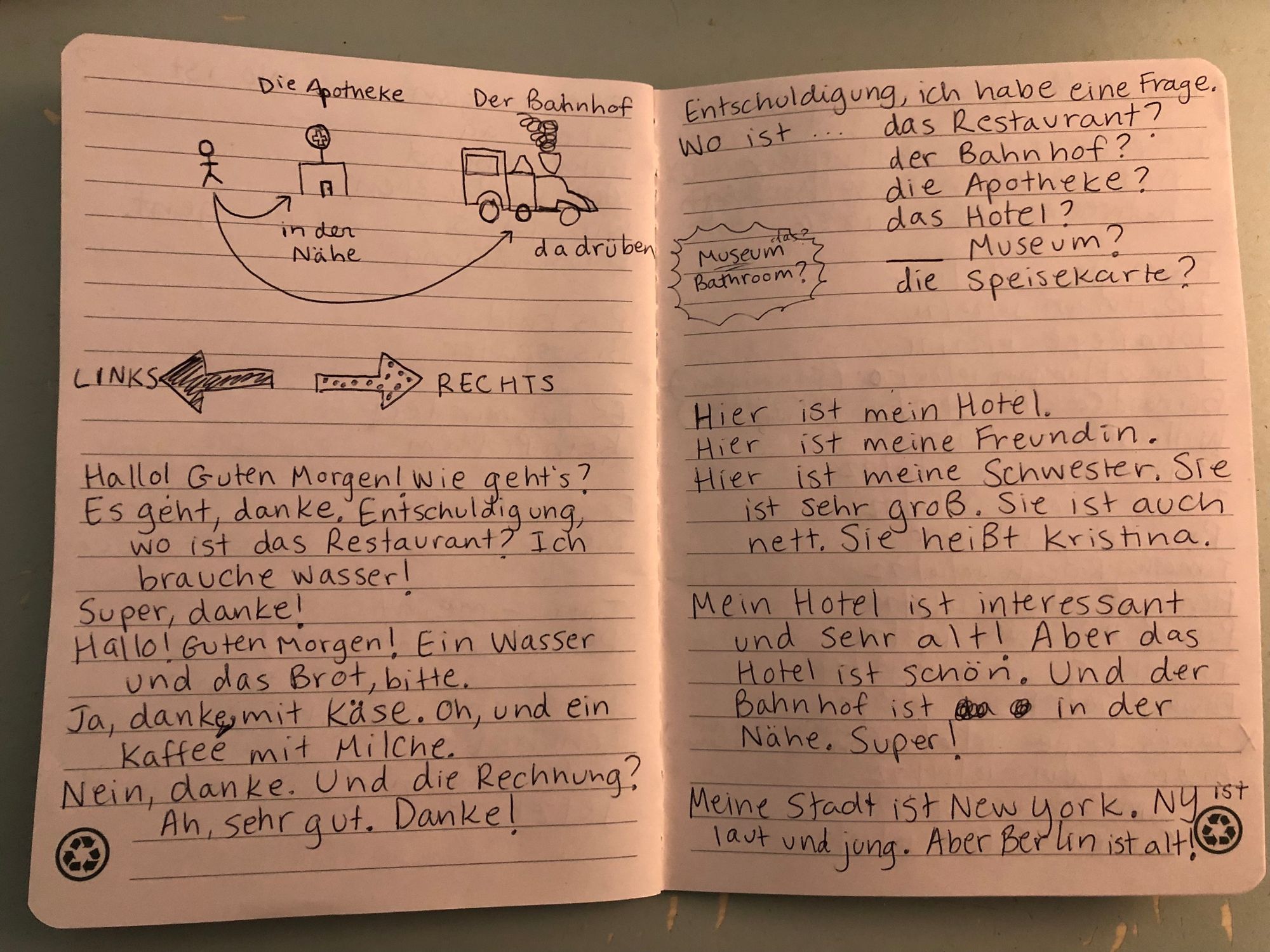 A page from my notebook during Week 3, studying on the train

What I learned in 4 weeks

In just the first week—completing the first three units of the course—I had already learned a lot of the key expressions and building blocks that I used in Germany:

By the end of Week 1, I could also introduce myself, make simple sentences (Die Katze ist sehr gut! "The cat is very good"—which wasn't even in my lessons, I don't think!), and be polite (I knew I'd need Entschuldigung (excuse me) a lot!).

So, was 4 weeks enough to learn German?

I wouldn't say I learned the entire German language, but I had a great time with the German I learned! I kept track of what I was able to do in German in a Twitter thread. This was a really fun way to celebrate using the language during my trip, and I love having it as a souvenir to remember not just what I did in Germany, but all the ways I was able to use German!

I also accomplished all my goals: I was able to greet and be pleasant to German speakers, I recognized information all around me (including on menus and train schedules)—and I achieved my stretch goal of having a small conversation! Or, sort of 😅 The conversations I had were very tiny, but my big accomplishment was ordering my breakfast at a German café, in a convincing enough way that staff responded to me in German—far more German than I could understand! 🏆

For my traveling style, I'm much more comfortable having a few months of language study under my belt, like I had for Italy, so I can express myself better, understand people's responses, and put more words togethers. I felt comfortable and confident using what I learned in under a month, and I wonder how my German will be after eight months, next summer! 😉 🇩🇪