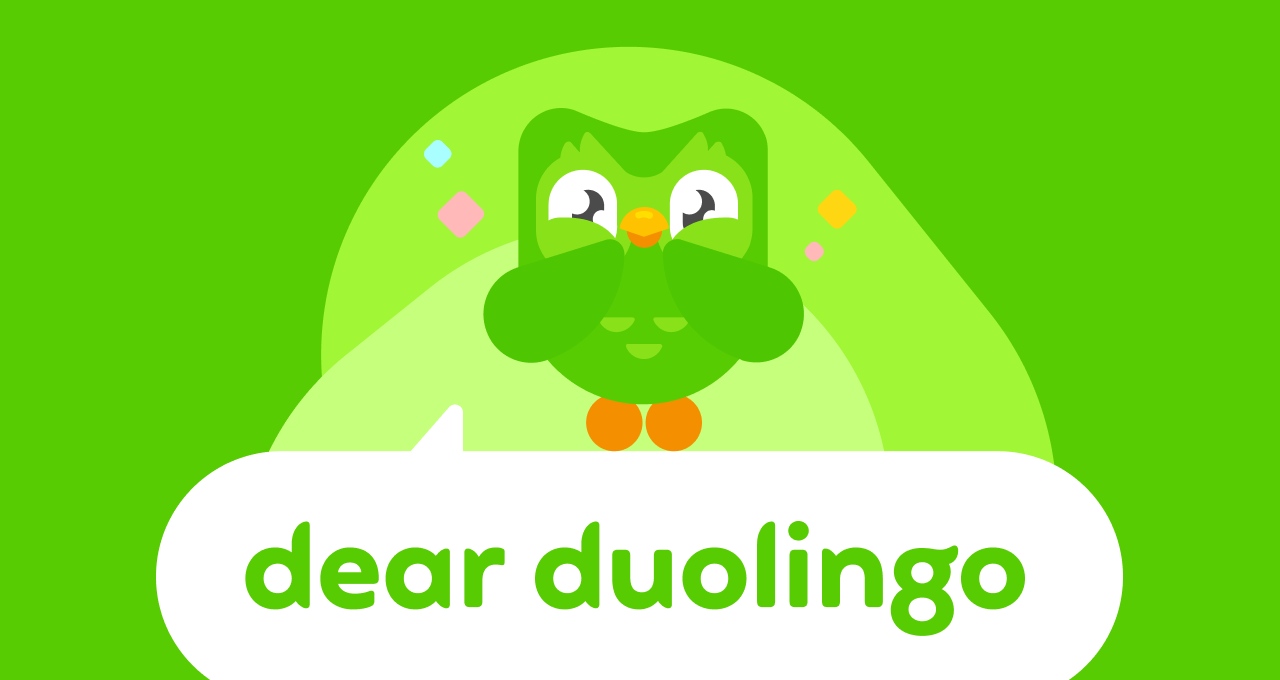 Hi, learners! 👋 Can you believe it’s almost June?! In the U.S., June marks Pride Month, which celebrates the LGBTQIA+ community. As we’ve talked about before, language and identity can intersect in really interesting ways, from how we use dialects and accents, to our rhetorical styles, to the languages we want to study. But today, we want to tackle a topic that quite a few learners have written to me about: gender-neutral language!

All of the languages I'm learning (Spanish, French, Arabic) require adjectives to match the noun's gender. But as far as I've learned, those languages only have adjective endings that signify either masculine or feminine. I am non-binary, which presents an impasse when I have to describe myself. Since language is always evolving with the times, I have to ask if the gender binary in these languages has started to expand to make room for genderqueer folks.

Thank you for the thoughtful question, NB Plussed! I’m excited to dive into this today, and I called in two experts to help. But first…

People look for meaning in differences, especially if those differences are reinforced through language and gender-specific words. Why do we have so many words with gender built-in, but not for ethnicity, religion, eye color, left-handedness, or any number of other ways people vary? Would we be comfortable with different words for wait staff depending on their ethnicity or hair color? Why do we do this with gender – and do we need to?

To answer these questions and learn more about gender-neutral language around the world, we spoke to Dr. Joshua Raclaw and Ártemis Lopez. Dr. Raclaw is an Associate Professor of English and Linguistics at West Chester University where they research the links between gender and language, and Ártemis is a Spanish<>English translator and PhD student researching non-binary language.

Where does gender show up in language?

You might be hearing a lot about gender and pronouns (more on this below), but gender shows up in other parts of language, too.

Reminder: Grammatical gender is a system of categories in many languages, especially those from Europe, in which nouns (even those not having to do with people) belong to a particular noun category. Those categories often have names that sound like human gender ("masculine" and "feminine"), but the reality is that those names are mostly arbitrary! (More about grammatical gender here and here.)

There are also many nouns whose meaning includes a person's gender, like "woman," "gentlemen," and "waitress." Some of these gendered nouns have fallen out of use over time, in favor of gender-neutral nouns; so "server" might be used instead of the gendered "waitress," "flight attendant" has nearly replaced "stewardess," "folks" shows up a lot instead of "ladies and gentlemen," etc.

Languages with grammatical gender categories have an added layer of gender complexity: nouns, and words about the noun, belong to a particular category, often labeled "masculine" or "feminine." That means that nouns about people might have an ending that is specific to one gender or the other, and other words, like adjectives and words for "the," might also be different depending on the person's gender. Dr. Raclaw points out that for nouns about humans, the gender category used – and whether it is accepted by others – is directly related to how minoritized groups are treated more broadly, including how they want to be referred to themselves.

"In a language like French where nouns are all assigned a grammatical gender, the word for president has traditionally been gendered in the masculine as le président with the grammatically feminine la présidente instead used to refer to a president’s wife,” Dr. Raclaw explains. “In 2014 during a parliamentary debate in France, politician Sandrine Mazetier (at that time Socialist president in the National Assembly) asked to be referred to as la présidente and when another politician, Julian Aubert, refused, he was fined and sanctioned. Debates ensued over what French speakers should value more: the traditional grammatical categorization of a word or shifts in the language that acknowledge that the title of president is not one solely held by men."

Romance languages aren't the only ones with grammatical gender categories; Arabic and Hebrew have grammatical gender as well, and how they develop gender-inclusive language can look different compared to Romance languages. Here’s an example from Dr. Raclaw of how this works in Hebrew: "Some speakers of Hebrew have simply combined the language’s masculine and feminine plural suffixes (-im and -ot, respectively) into a new gender-inclusive suffix -imot, expanding the traditional plural forms for the Hebrew word for “friends” (chaverot, chaverim) to also include the gender-inclusive form chaverimot.

Thinking about – and changing – how gender is represented in language is nothing new. "The use of Ms. as an address term for women that was 'neutral' with regard to marital status was something that only caught on widely during the twentieth century," Dr. Raclaw points out, "and there have been many discussions over whether Ms. was correct English or what the use of Ms. actually signified." For people using and studying English today, the inclusion of Ms. as a title option might not draw much attention, because we've been seeing it for decades! But new additions and options in language can stir up resistance, just as they did for Ms. decades ago. Dr. Raclaw explains that "[w]e still see these conversations happening because of the ways that we have long politicized gender, particularly in the way these conversations question whether minoritized groups deserve to be referred to in ways that acknowledge and affirm their existence."

One very old gender-neutral change in English is the use of "they" to mean one person. When "they" first appeared in Middle English, it was borrowed from a different language entirely (that's right, Middle English adopted a new pronoun!), and at first people used it as a plural word for masculine nouns – but it wasn't long before people started using it to refer to one person, in a generic sense where a person's gender wasn't known or relevant. Instead of saying "he" (a gendered pronoun) or some longer expression, people repurposed an existing word to fill in a gap in the language.

Other languages use different strategies for gender-neutral language. In many Romance languages, nouns for people are either masculine or feminine, so how do you refer to a group of people from different genders? In Spanish, the default has been to use the masculine form, so for example ellas (feminine) is used for a group of women, ellos (masculine) for a group of men, and ellos also gets used for any non-homogenous group: a group of men, women, and people of other genders; a group whose genders were unknown; etc. But many people, especially non-men, have pointed out that using the masculine as the default doesn't feel very representative (just like using "he" as the default in English). Spanish speakers have found ways around using the masculine as default, including with new words (elles), different expressions (mis amigues or mis amigxs as ways to say "my friends"), or leaving out the pronoun if possible. There are also ways to talk around gendered language, for example by using a different expression, like Le damos la bienvenida – sort of "We welcome you" – instead of using the gendered Bienvenido or Bienvenida ("welcome").

Another place people's genders can show up in language is in pronouns. Pronouns are words that replace nouns, and so pronouns are used with people (e.g., he, her, our) and with all other nouns, too (e.g., it, those). Many languages have relatively few pronoun options for humans compared to all the different ways people can express gender, and sometimes people want ways to communicate without zeroing in on gender at all. (You might have had this experience reading older texts that use "he" as a default or the clunky expression "he/she." Is it always necessary to point out the gender of a hypothetical person in instruction manuals or legal forms??)

So languages and the people who use them often evolve new ways and categories to match their needs. To learn more, we chatted with Ártemis López about how pronouns are changing in a number of languages.

What's the difference between "gender-neutral pronouns" and "neopronouns"?

Ártemis: “Neopronouns” are words that are new (neo), so pronouns that aren’t traditional, whereas “gender-neutral pronouns” is a more general term that can include neopronouns as well as traditional pronouns as long as they don’t have gender. In languages like English, people usually share their pronouns by giving more than one word, like they/them/themself, mostly because neopronouns, being new, can be confusing for people who haven’t heard or seen them before, and in English our pronouns change depending on their role in the sentence.

Do gender-neutral pronouns and neopronouns evolve in the same way across languages?

Ártemis: Since every language and every community is different, non-binary or gender-neutral language won’t develop the same way in all languages, or even in different communities that speak the same language. For example, Galician, a Romance language spoken in northwestern Spain, has two different non-binary systems currently in development, which have come into broader use at about the same time and which simply developed among different groups of people. Time will tell if both systems stick around, only one, or a different one! So, if the same language in a relatively small geographical area can have two separate systems, why would we think that different languages in different continents would develop at the same rate?

What are some gender-neutral pronouns and neopronouns in different languages?

How do you ask someone their pronouns?

Ártemis: The first thing to be aware of is that we don’t always need to know someone’s pronouns. For example, if we’re shopping and the person in front of us drops something, not only is their gender irrelevant, but we will never see them again! We can say “excuse me” instead of “Sir/Ma’am” and instead of asking for their pronouns. If knowing someone's gender is relevant, it’s important to know that, in asking, we’re committing to using the proper gender for that person going forward.

For Romance languages, we often don’t even have to ask but only to listen: if someone says heureuse (happy) rather than heureux (happy, in the masculine form) we can assume the person uses feminine words. If we don’t hear any words like these and need to ask, though, it’s always nice to volunteer your own gender too. Here are some examples:

Language is as diverse as its users

Language holds a lot of power: it directs our attention to certain characteristics, and when we can't find the right word or phrase to express our meaning, we innovate! Gender is just one feature of the human experience that motivates language change, and this Pride month, take a moment to observe recent language change and changes in progress – in your own language and the one you're learning.

Let us know what other language patterns you've noticed or have questions about by sending us your ideas for Dear Duolingo! Email us at dearduolingo@duolingo.com.